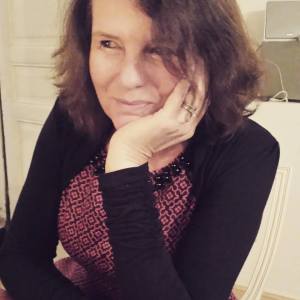 About Bev Spicer:
I started writing stories when I was a child, reading them to my sisters, who were generally quite demanding, wanting to know what happened next. They didn’t like the idea of a cliffhanger!

At school I soon realised that I wanted to specialise in literature and languages, which I went on to study at Keele university. Following that, I gained a PGCE at Queens’ College Cambridge and took up teaching posts in Greece, Seychelles and finally at Anglia Ruskin University in Cambridge.

Five years later, I moved to France with my husband and two youngest children, where I am lucky enough to be able to write every day.

I write in many genres, including humour, mystery, psychological drama and science fiction, but always with an eye for detail and a desire to create believable and complex characters.

What inspires you to write?
I get inspired by ideas that come from conversations, news items, pictures, and reading other books. Usually, it’s a character who catches my imagination and I begin to hang a plot around him or her. This process happens almost involuntarily, with scenarios going round in my mind until I am more or less obliged to get out my laptop! Sometimes there are multiple book ideas going on at the same time, which can be a bit of a challenge.

Tell us about your writing process.
I don’t use post-its or charts or story-boards. I’ve tried all of these methods, but, with a good laptop, I can edit and re-write much more easily than juggling bits of paper with illegible notes on. The initial planning takes place in my head and involves gaining an overview of the project before diving in. In one of her online interviews, Margaret Atwood used imagery that I think expresses perfectly the actual process of getting a story down ‘on paper’. She describes a ‘rolling action’ similar to ranks of soldiers advancing with rifles; the ones at the front, having fired, crouch down to allow the ones behind to move forward. Thus, as I write, I am constantly thinking ahead to what comes next. I might get shot in the back occasionally, but I generally survive.

For Fiction Writers: Do you listen (or talk to) to your characters?
Of course! I try not to do it out loud though. People in my small French village already have me down as an eccentric English woman with gigantic children. My Characters can do things I would never dream of doing in real life. That’s the fun of it. They have idiosyncrasies, values, aspirations, flaws. I have to know them inside out to be able to write from their point of view. When I’m buying a baguette, I might be wondering how it feels to watch my father preparing a body for viewing at a funeral, as happens in The Undertaker’s Son. Or I might be falling in love with a man who might never be mine, as Martha Burton does in the same novel.

What advice would you give other writers?
This is a really impossible question to answer. It always makes me feel as though I might be teaching my grandmother to suck eggs. Things I have learned over the years are mostly to do with meticulous editing, proofreading, endless re-writing and never ignoring any niggling doubts you may have about a dubious paragraph/chapter or a lame piece of dialogue. Unfortunately, along with a large number of professional independent writers, there are those who, for one reason or another, end up publishing work that is not fit to be published. I have to say, though, that having recently read a wonderful novel by Rose Tremain, traditionally published authors are not immune to (a large number of) errors and typos. Sorry, Rose.

How did you decide how to publish your books?
When Kindle Direct Publishing came along I’d just finished writing ‘Bunny on a Bike’. I looked into the process of submitting to traditional publishers, tried a few – with very proscriptive letters, synopses, sample chapters, etc, then thought the independent route seemed much more, well, independent. I like the total control I have and I believe that, in the end, if a book is good enough, it will succeed. I do have my fingers crossed when not at the keyboard…

What do you think about the future of book publishing?
No idea. Who would have said that KDP would come along? I suppose it might go up in a puff of smoke and leave us all bereft at some point. Who has time to worry about the future, anyway?