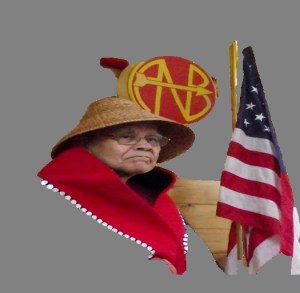 About Bertrand Adams sr:
Kadashan was given his birth name by his grandmother who named him after her father, John Kadashan, a clan leader from Wrangell, located on the southern end of the southeast panhandle. The elder Kadashan, as a young man, was one of the guides to world traveler and naturalist, John Muir. In his elder years he was known as a “peace-maker” among his native peoples. Kadashan means “red tide coming.”

Kadashan began writing when he was in college. He was encouraged to by his creative writing instructor, who recognized his passion for story-telling. Twenty years later his retired teacher and college mentor visited him, read the stories he had stored in a drawer, and persuaded him to find a publisher. In time his rejection slips were thicker than his manuscripts. Eventually, he was discovered by the publisher of the Alaska Native Magazine who began to feature his short stories and his water color paintings that illustrated his stories. Yaakwdaat Aya is now published as a short story collection.

Shortly after, he began writing essays for the Tundra Times, a statewide Alaska Native newspaper. His commentaries dealt with Indian politics and tribal governments. Eventually he was under contract with the Juneau Empire and wrote a monthly column for the Capital city’s statewide newspaper. He tweaked these essays and self-published The Laws of Nature and Nature’s God in eBook.

His latest, Kadashan Speaks–Legal Plunder clearly demonstrates the adverse signs of the times in America and how the federal system is using legal plunder to fashion illegal issues legal.

When Raven Cries is Kadashan’s first novel. It is out of print however Kadashan is working to have it reprinted in eBook. He is presently occupied with writing another novel and a non-fiction book about the history and culture of his Tlingit clan.

Kadashan received his education from Sheldon Jackson College in Sitka and Brigham Young University in Provo Utah. He is a retired commercial fisherman, a salt water charter boat captain, and tribal government president. He lives in Yakutat with his wife near his children and grandchildren.

What inspires you to write?
I was inspired to write when I was in college. My creative writing instructor who thought I had a lot of good stories to share. She helped me to develop short stories. I wrote about a dozen stories in one semester and the when I left college I stored them in my drawer. Twenty years later I was visited in my village by my teacher who read my stories. She asked me why I was hiding them and encouraged me to polish and find a publisher. It took another twenty years to be discovered, and I have been writing a lot lately.

Tell us about your writing process.
When I write short stories I create characters from people I know, in my mind develop a plot as I write. Most of my stories are taken from actual events. When Raven Cries is the result of a personal experience when my younger brother got lost and this event caused the entire village to drop everything and engage themselves in the search. Whenever I start writing a novel I do use a plot outline and character sketches. I also write articles and essays and I simply do reporting on political issues. In my book Yaakwdaat Aya, the stories I began writing in college, were illustrated with my water color paintings.
fo

For Fiction Writers: Do you listen (or talk to) to your characters?
I listen a lot—mostly in my dreams. In the middle of the night I have to get up and write. Often when I am out for a walk I hear my father talking to me and reminding my about my history and culture. In my stories I have to educate my readers about my Tlingit background and traditions.

What advice would you give other writers?
Read and write a kit. Read history about nations that have come and are gone and find out what caused their fall so we cannot make the same mistakes.

How did you decide how to publish your books?
After my creative writing instructor visited me and made me take my manuscripts from my drawer and left her in my office to read. When she read enough she called me back and asked me why I was hiding these stories. She challenged me to find a publisher and left me that afternoon. I never saw her again, but I took those stories and began to work on them; My rejection slips were actually thicker than my manuscript, but in time I found a person who owned a magazine in Alaska. She began to use the stories. I finally got recognized. I began to research self publishing; those experiences took me to the present.

What do you think about the future of book publishing?
I love it. I recently got familiar with Create Space and within a period of six weeks I was able to format some of my work in progress and today have five books published and more in the works and planning stages..

What genres do you write?: Short stories, novels, essays/articles

All information in Author Interviews is presented as submitted by the Author. We do not edit so readers can see the author in their own words.