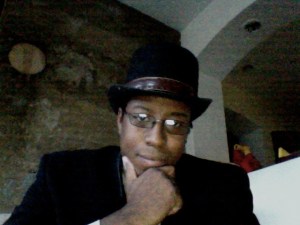 About Berley Kerr:
Berley Elston Gordon Kerr III first answered the call to write while he was in his high school creative writing class. What he had originally hoped would turn into a career developing stories for role playing games evolved into a love of writing science fiction and fantasy novels as well as short stories. After spending over ten years writing novels and collecting rejection letters Berley finally got his big break with Curse Breaker: Guild Assassin.
Berley holds a Bachelor’s Degree in English from California State University, Northridge and currently lives in Los Angeles, California.

What inspires you to write?
What inspires you to write?
That’s both an easy and difficult question. A good book, whether it’s a comic book or a science fiction and fantasy novel, or even the occasional thriller, have a wonderful habit of taking me to another world . And when I’m in one of those imagined worlds I’m excited to be there and I’m sad when the book comes to end or when a series comes to an end and I can’t see anything new about that world other than what’s in my head. (Hell, after finishing the Deathly Hallows I spent a week wondering what Harry and Ginny’s wizard wedding was like.) I still remember where I was the first time I finished the Chronicles of Narnia Series, the Harry Potter Series, The Lord of the Rings, The Mist Born Trilogy, The Kushiel’s Dart trilogy, Sword of Shannara Trilogy and so on.
I love having that sense of wonder when I’m reading a good book or watching a good film. The only thing I love more than experiencing that sense of wonder is getting others to experience that sense of wonder themselves. I absolutely love how writing helps to stretch my imagination in an infinite number of directions. Reading is fun but it limits me to the author’s own imagination and the words he or she and sometimes they, put on the page or don’t put on the page. Writing is more fun because my own imagination has no limits regardless of what I chose to share or not share in my stories.

Tell us about your writing process.
When I started writing I used to just write a summary, plan out the chapters and just start writing from there. But a few years later I started writing a detailed outline of whatever story I’m working on. I’d handwrite it first, because it’s much easier for me to get my thoughts on paper than on processor, and it would make me think twice about what I would write down. The outline would consist of just one sentence statement of events told more or less in the order I wrote them in.
After I’m satisfied with the outline, I open a new Word doc and start banging out the rough draft, using my outline as a guide. Every day I would write at least 1,000 words or until at least two hours pass (whichever comes first; usually the former) and keep it up every day.

For Fiction Writers: Do you listen (or talk to) to your characters?
All the time. All of my characters are motivated by different goals and every once in a while I have an impromptu interview with them to see what makes them tick. Whenever I get stuck a quick interview with a character (protagonist or antagonist) helps me get unstuck. After an interview my character’s goals are much clearer to me, even if they aren’t clear to them.

What advice would you give other writers?
For me, the absolutely best advice about writing comes from David Gerrold: “Write what you care about most – that way at least one person in the universe loves your story. And if one person loves it, then surely there will be others.”
And my second favorite and equally important piece of advice, “Write every single day. No matter what.”

How did you decide how to publish your books?
Since the day I realized I wanted to be a fiction writer, it’s always been my dream to see a book I wrote in print and someday on the shelf of a bookstore. It’s that one dream that drives me to sit down every day and write something. And I’ve gotten this far so I guess I’m on the right track.

What do you think about the future of book publishing?
It both thrills and terrifies me. Thanks to the internet and ebooks more and more people are now able to express themselves. But with so many new people it’s getting much harder to stand out and to be taken seriously. Especially now since book reviews can be bought and manufactured like any other good or service.
I also love going to a book store and browsing among the hundreds of possibilities. I hope not to lose that any time soon.

What do you use?: None of the above 🙂

What genres do you write?: Steampunk, Science Fiction, Fantasy, Speculative