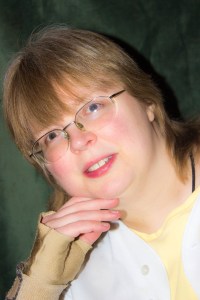 About Barb Caffrey:
BARB CAFFREY is a writer, editor, book reviewer and musician from the Midwest. She is the author of the humorous YA urban fantasy/romance AN ELFY ON THE LOOSE, and is the co-author of the Adventures of Joey Maverick series (with late husband Michael B. Caffrey). Other stories have appeared in HOW BEER SAVED THE WORLD, STARS OF DARKOVER, and BEDLAM’S EDGE. Barb is a huge baseball fan (Go, Brewers!), reviews books at Shiny Book Review, follows politics, is mystified by the Maury show, and wonders when her little dog will ever stop doing “the paw trick.” Find her at Elfyverse, Shiny Book Review, Facebook, or Twitter.

What inspires you to write?
There are several reasons. First, I have stories to tell and I need to tell them. Second, my late husband Michael left behind many wonderful stories, and I want to make sure those stories get told, too. Third, between my wonderful husband and my excellent friend the late Jeff Wilson, I had a great deal of encouragement to keep telling my and my husband’s stories.

That’s why I’m doing my best to tell all the various stories, whether they’re humorous fantasy, military science fiction, or anything in between…because the stories won’t wait.

Tell us about your writing process.
I tend to start with an idea, and I go onward from there. I’m much closer to a “pantser” than a “plotter,” though I have been known to write character sketches and I will try to map out thorny sections via outlines or synopses.

The most important thing to me, though, is to be faithful to your ideas and be authentic with them. If you have a character who’s innocent and naïve, the way my Elfy hero Bruno is, don’t try to make him a man — er, Elfy — of the world, except in his own mind. (He may think he’s a man of the world, but make sure his actions show he isn’t.) If you have a character who’s a nasty piece of work, make sure if he does something that seems nice on its surface, that action has a sting in its tail for the unwary…of such things are stories made. And blown.

The second-most important thing is to do your homework. Make sure you understand what the milieu of your story is, and be faithful to that milieu. If you’re writing fantasy, make sure the rules for how people do magic are consistent, or if those rules are broken, what the consequences are…don’t make your hero or heroine into a “Mary Sue/Marty Stu” who can do everything without effort, because that’s just plain boring to read. (Why should we care about someone who has no problems, anyway?)

Finally, my process requires a lot of thought and sometimes some substantial revisions as I learn more and more about my characters and their milieu. Do not be surprised if your process takes you similar places, and try to learn how to be patient with yourself as the revelations come. (It’ll make you a happier writer, trust me!)

For Fiction Writers: Do you listen (or talk to) to your characters?
I definitely listen to my characters, and I have been known to have conversations with them. Bruno himself stepped out of a dream and told me what’s what; other characters in my Elfyverse (what I call the milieu of AN ELFY ON THE LOOSE, the parallel universes making up the Elfy Realm, the Human Realm (our Earth), and other Realms) aren’t always so forthcoming, but they usually will give me some information if I concentrate on what they’re saying.

Don’t underestimate the power of a character sketch if a character is being contrary or doing something you truly don’t understand. This is something I’ve used to good effect several times in my writing; it works.

What advice would you give other writers?
Stay the course. Writing is tough, because you’re mostly by yourself and unless you’re fortunate enough to have a very good friend and/or an extremely supportive spouse (as I did), you aren’t likely to have many people who care about what you’re doing as you do it. You have to be true to what your story is, and keep after it…then, once your story is done, you can’t be afraid of promoting your work, either. (I find promotion to be the toughest challenge of all, and can see why big-name writers hire publicists!)

But the most important thing to remember is this: practice patience. Only rarely does success come overnight. Usually it comes as a result of many years of hard work and effort, followed my even more hard work and effort. You need to love what you’re doing in order to write books, because you may never make a good living at it. But the rewards of hearing that your book made a reader you don’t even know smile, or laugh, or think of something in a brand-new way tend to make it all worthwhile.

How did you decide how to publish your books?
I researched both agents and publishers, and submitted to both over the years. I never did find an agent, but I did find a wonderful publisher, Twilight Times Books. They are reputable, author-friendly, have an understandable contract, and I have been treated fairly by them.

But I’ve also self-published several stories of my late husband Michael’s, and I’ve been affiliated with a different small press publisher in the past, E-Quill Publishing in Australia. (No, I’m not Australian. But I knew the publisher because of a mutual friend.)

The important thing to remember about self-publishing is this: Make sure you hire an editor. Make sure you get a professional-looking cover. (Neither have to be expensive, and sometimes you can trade a cover for an edit if you’re hard up for money.) Make sure your book looks as much like those put out by big-name publishing houses as possible, at least as far as your actual prose goes…and then, as I said before, do not be afraid to promote your efforts.

Personally, I think being a “hybrid author” (that is, having some things that are self-published and some that are published traditionally, either by a small or large press) is the best way to go because you get the best of both worlds that way. But I know some authors who’ve had a great deal more success, financially, than myself who are strictly self-published authors because they like the freedom it brings; I also know some authors who refuse to go the self-publishing route at all (though those become rarer all the time).

Whatever you do, you should make absolutely sure you research all your options as best you can before you do it. Forewarned is forearmed.

What do you think about the future of book publishing?
Over time, I think book publishing is going to have fewer “dead-tree” editions (that is, hardback or paperback books) and more and more e-books. Self-publishing will continue to exist, as will both small and large presses, but the larger places in particular will have to become more audience-friendly down the line. (Right now, the “midlist” author is being squeezed, while the big names like George R.R. Martin are grabbing a ton of money. While there’s nothing wrong with Mr. Martin grabbing all the money he deserves, those poor midlisters deserve better, which is why many are turning to self-publishing and smaller presses to get their books out before their audience — and with much better contractual terms in the bargain.)

Why are the bigger houses going to have to do this? Well, very few authors are as prolific as my friend Christopher Nuttall, who’s put out over forty long-form stories in the past three or four years. (Chris, by the way, is also a “hybrid author” as well as being a multiple Amazon bestseller for his science fiction and fantasy.) Most of us are able to put out one or two books a year, max, because we have other things going on in our lives, and we just can’t write any faster than that.

So if you’re a reader waiting for the next book in Martin’s “Song of Ice and Fire” series, considering Martin tends to write a new book in that series every few years or so, you need to find books that are in that same genre but are written by someone else. (Please forgive me if this is too simplistic.) Readers have figured this out, which is why many are trying new authors, many of whom are self-published. Unfortunately, the bigger houses haven’t, which is why they all seem to be merging and becoming ever-bigger conglomerates, all the while squeezing out the “midlister” who might just be the next George R.R. Martin if the big house would only pay attention and help promote his/her work.

That’s why I think the best way to go for an author is to become a “hybrid” author, because that way, if the big presses go the way of the dinosaur, you still have books to sell. (And if that black day comes, the smaller presses will suddenly become much more viable for many…and will become the new “bigger houses.”)