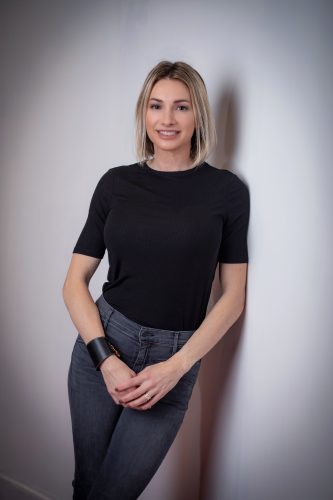 About Ashley Elliott:
ASHLEY ELLIOTT was raised in Conway, Arkansas. A survivor and an advocate for victims, she devoted more than a decade to her quest for justice after her father’s murder and mother’s kidnapping. She holds a BS in Organizational Communication from the University of Utah, and is an avid hiker, athlete, bodybuilder who has competed in and won medals in various competitions. She lives in Utah with her husband and children. The Demon in Disguise is her first book.

What inspires you to write?
When my father and a friend were murdered execution-style and my mother kidnapped in a thwarted murder-suicide attempt in 2002, various media outlets provided their journalistic perspective to their respective audiences. I often participated, responding spontaneously to questions as they came. As time passed, however, with the help of therapy to cope with my PTSD, I realized the need to find my own voice. I had to come to grips with the worst thing I could ever imagine happening in my life in an expressive way that charted a healing path of self-discovery. Almost twenty years after the events, I wanted to reduce how I felt to words on paper.

What authors do you read when you aren’t writing?
Obviously Michael J. Coffino is my favorite author, however I also enjoy reading Brene Brown. I would like to mention that for me when reading a book it’s more about the content of the book not necessarily the author.

Tell us about your writing process.
I sat down each morning to write. It wasn’t easy. I cried often, sobbing uncontrollably, an unbearable experience that made things worse, sending me into darker, more painful places. It made me realize how much I was still grieving, despite the normal life I presumed I was living. I discovered that I had to engage in a more dramatic excursion, digging deeper into the crimes themselves. I had to know more, to know the truth, and record what I learned in a book. I also knew that I was going to need help.
After a search, I came across Michael J. Coffino, who in addition to being a full-time author, ghostwriter, editor, and writing coach, was a trial attorney. After almost twenty years of enduring the criminal justice system, one thing was certain: I needed both an attorney and a professional writer.
Michael walked me through his process of writing, which was far more logical than mine. I shared with him my initial attempts at writing, essentially pages of emotional vomit. We crafted public records requests to send to state and federal agencies and received voluminous investigative and court records.
We had weekly interviews, what were for me a series of therapeutic conversations, and for him a treasure trove of critical information. Michael also conducted third party interviews, including of law enforcement, attorneys involved in the legal actions, and friends.
Michael constructed the book. He sent me chapters one at a time for my review, comment, and edit, which I would return to him for further polishing. Once we had a routine, the process unfolded efficiently, producing a manuscript after only several months.

What advice would you give other writers?
I think passion is important in writing. I personally have a hard time writing about anything I don’t feel passionate about.

How did you decide how to publish your books?
Michael walked me through the process of publishing. We ultimately decided on hybrid publishers. It offered us a faster timeline than a traditional publishers and the support, distribution and exposure that self publishing lacks.

What do you think about the future of book publishing?
Being a first time author I don’t know a lot about the publishing industry. However with the technology that we have today I would imagine that book publishing will move toward more hybrid and self publishers. Each of these outlets seem to allow authors more freedom and a greater return on their investment.

What genres do you write?: True Crime & Memoir