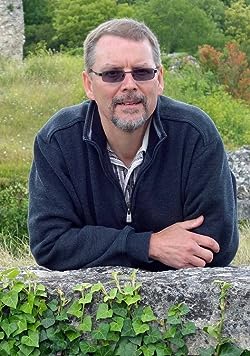 About Andean White:
As a young boy at family gatherings, I recall listening to the men after a meal. The opinions around the subjects of politics, car brands, hippies, and rock n roll filled the room with energy like aromatic smoke from a pipe. But, when the story telling began everyone found a seat or patch of floor. We sat for hours absorbing the stories, fact or fiction, that shaped who we became and it strengthened our imaginations. Fifty years later I know that a world without imagination would be pretty boring.

What inspires you to write?
For Winter’s Thief, the idea came from a completely different source than other stories. Kathryn Elizabeth Jones, mentor turned editor, asked if I would write a page and a half story inspired by a card pulled randomly from a deck. The card contained a reproduction of the Bernardo Martorell painting titled Saint George Killing the Dragon—a castle, princess, knight, and a dragon. I was not thrilled with the assignment and put it off until a couple hours before our meeting. With little time to proof, I had to be at my best. It turned out pretty good. Over the next month Kathryn talked me into five pages, ten pages, a couple of chapters, and then a book.
Usually, I get a story idea from a newspaper article, TV newscast, friend’s story telling, or what I might hear waiting to board a plane. Then I will take a few days to draft settings, plot twisting, and characters needed to support the story.

Tell us about your writing process.
I do some of both methods.
My first step is developing the general story line—typically five to eight word sentences that represent the chapters. For example, Oscar sneaks baby into castle.
The next task is providing better descriptions and key details to a section of chapters. The work of writing turns these notes into the story. When I am satisfied with that part of the book, I move on to the next section. Previously, I attempted to outline the whole tale, but found that the characters and the story sent me “off script”.
One Note is great for brainstorming, organizing, and documenting the details. Lately, I have used Scapple to create a visual presentation of the key elements of the story.

For Fiction Writers: Do you listen (or talk to) to your characters?
Listen. It’s hard to learn anything about the characters if I do the talking.

What advice would you give other writers?
Don’t give up! Get your stories in the hands of a professional for evaluation. Let them advise you. The writing world is tough, and like nature only the strong survive. And, you need to be bulletproof, because it’s hard listening to someone squash your pain staking work. It’s hard work but the rewards are fulfilling.

How did you decide how to publish your books?
Winter’s Thief is self-published. My first experience with publishing was one of the “vanity publishers” and it was very expensive.
Self-publishing is not as daunting as it may appear. There are lots of companies and small publishing shops that cater to the self-publisher. I used Idea Creations Press, they were reasonably priced, and their service was quick and very professional.

What do you think about the future of book publishing?
It is going to change dramatically, again. The impact of self-publishing on the internet will continue to reshape how books are delivered. I think genre will eventually become the deciding factor on the type of publishing, and the price.
Competition in the self published arena where thousands of stories are released each year will be more competitive. And genre’s like young adult, fantasy, mystery, scifi, etc will be best served by self publishing.

What genres do you write?: Young adult, heroic fantasy