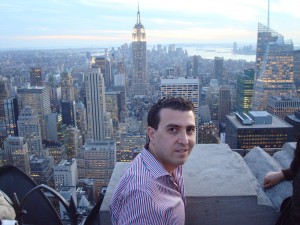 Author Bio:
Ahmad Ardalan was born in Baghdad in 1979. At the age of two, he moved with his parents to Vienna, Austria, where he spent most of his childhood and underwent his primary studies. After his father’s diplomatic mission finished at the end of 1989, he returned to Iraq, where he continued his studies and graduated from the University of Dentistry. As a result of the unstable political, military, social, and economic conditions in his home country, Ahmad decided to leave Iraq and move to the UAE. After facing difficulties to pursue his career in dentistry, he opted to pursue employment in the business world. Since then, Ardalan has held several senior roles within the pharmaceutical and FMCG industries, throughout much of the Middle East. His early childhood in a mixed cultural environment, as well as his world travels, increased his passion for learning about cultures of the world and inspired him to pen The Clout of Gen, his first novel. After eleven years of being away, Ahmad returned to Baghdad in January 2013 on a visit that was full of mixed emotions. Inspired by his trip to Iraq, he wrote his second novel, The Gardener of Baghdad.

What inspires you to write?
Travelling, meeting people from all around the world and learning their different cultures.

Tell us about your writing process.
Writing….. It all starts with an idea, this idea transforms into a begining and a clear end. I close my eyes and imagine the last scene in the book, the rest just comes as the words flow.
There always has to be a solid base, a foundation for the whole story, the core of all your ideas, and from that point all the ideas start coming. It usually happens to me anywhere and anytime, while driving, eating, talking, and when an idea pops, I try to grab a pen and just write a word or two that reminds me of the scene that just came to my mind.
Writing to me, is an escape to a world of my own, and this world, I plan to share with you all.

For Fiction Writers: Do you listen (or talk to) to your characters?
I live through them.

What advice would you give other writers?
Never give up. It might take ages for an Author to make a breakthrough, just have faith and enjoy it.
Also, If a story pops in your head, don’t hesitate, grab a pen, or get anything and type the storyline.

How did you decide how to publish your books?
I searched a lot, and I found it easy to self Publish.

What do you think about the future of book publishing?
eBook Self Publishing will be on the rise there is no doubt as the eBook market is growing rapidly. But people will always have a soft spot for holding a book. I would say each will take its share.

What genres do you write?
Fiction (Suspense,Scifi, Drama, Historical Romance)