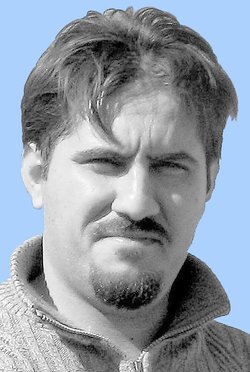 About Ahmad Amani:
Ahmad lives in the Middle East, the world of ‘to be or not to be,’ where the third way, democracy, isn’t for mankind—at least for now it isn’t. He is a graduate of the Art University in Tehran. He has worked for many newspapers in Iran and Iraq as a journalist.

His books are stories about people, society, and culture. The books were written in a new concept and fantasy form.

I have a cute daughter (Dania), I am worry so worry about the life of my child, and in this way I could understand what happened for children in the Middle East I thought I could write about these wars and the culture of the Middle East’s people in fantasy style, in the world of mathematical symbols like Poor Zero, Ms. Fifty Thousand, Mr. Upward Lying Line (plus). I think fantasy is a major influence on the people. In fantasy, you never have to point out or criticize anybody or any certain culture. I never like to point at a certain culture because all cultures have some strong points and some weak. Therefore, through fantasy, we can challenge cultures to reach peace.

Tell us about your writing process.
I always drew in mathematics, history or our world but, of course, still I am alive. Instead, slowly numbers and historical symbols came to life as characters in my mind such as Mr. Six, Lady Thirteen, the Lying Line (minus) and Mr. Broken Line (from my next book), Or Big Fish. With them and a little interest in writing I would be able to write some short stories which have a mathematics structure, like Math City.

For Fiction Writers: Do you listen (or talk to) to your characters?
Yes, I often talk with my characters, and next we (I and my characters) go to play with Dania, really that is so great, although there is war, terrible wars, a big fantasy world with little daughter will mix in together in some unique time.

What advice would you give other writers?
Read and read, and do it which she/he want…

How did you decide how to publish your books?
In the Middle East, Internet is an important way to be free, free of war free of religions and so on. In this world you could find many friends, but also you could share your book in self-published. For me, a presence on the global publishing scene is so exciting where I am known by many friends and book lovers.

What genres do you write?: fantasy