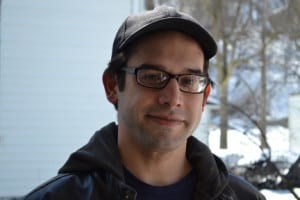 Author Bio:
Originally hailing from Columbia, SC, Adam lives in Eau Claire, Wisconsin with his gorgeous wife and two adorable kids. He spends a lot of his time trying to figure out what part of this world he’d like to visit next.

His favorite activity is to explore, whether it’s his current hometown, or anywhere else he happens to end up. When he’s not exploring, he often finds himself enjoying stories in whatever form he can find them, through television, movies, books, comic books, and video games.

What inspires you to write?
I’m inspired to write by almost everything that happens around me. As a writer, I believe inspiration comes from everything and everywhere. I’m never quite certain what will cause the next inspiration. That’s why I’ve always got something on me to take notes with.

Now, if you’re asking what motivates me to write. Quite simply put, my kids. I wrote my first book after the birth of my daughter, simply because I finally realized I was getting older and hadn’t done anything I could be personally proud of yet (outside, of course, of producing a child, which at that point had required little work on my behalf). I keep writing because of that same mindset, to keep proving that I can do more than I already have. It keeps me sane.

Tell us about your writing process.
Although the method in which I attack a story seems to differ greatly from story to story, I believe I’d still be what most people consider a “pantser”. There’s a great bit of the story that I don’t know when I actually start writing the words that might have a chance of being in the printed version.

That being said, there are some things I do to really help me get those first words onto the page. The biggest thing for me is characters. I like to have a good idea of what motivates my characters, so I can come up with conceivable methods to get them through the story, as well as to have a basis for their dialogue. I usually create rather lengthy character sheets for each of the main characters (sometimes creating them for the minor characters as they appear), just to have a basic idea of their background. Many of the things on the character sheet are not things that are ever actually revealed through the course of the story, just little pieces that help me think of what they would do in any given situation.

The other big thing I do, as I believe most writers do, is think about the story constantly. It can be the middle of the night when I finally figure out how a story I’ve been working on slowly for years actually fits together (once again why you should always carry around something to take notes on).

I’m sure if I plotted things out more fully beforehand, I’d probably be a faster writer when it came down to daily word counts, but as it is, I find that I’m constantly surprised about where things go, as the characters tend to drive the story forward for me, which is a lot of fun.

For Fiction Writers: Do you listen (or talk to) to your characters?
I’m not sure that I have any actual conversations with my characters, but I do get inside their heads to a certain degree. That might have something to do with my background as an amatuer actor. My characters almost always drive how the story moves forward, which is due to me really getting inside their head…so I guess the answer to this is that I kind of “become” the characters. Although that sounds really cheesy…

What advice would you give other writers?
The best advice I have is to set a goal for yourself. A daily or, if necessary, weekly, goal on how many words you will write during that time period.

Due to my personal life, you know, like real job and all that, my daily goal changes on a regular basis, depending on how much time I’ll actually be able to put into writing during a given week, but I always set a specific amount of works I will be writing on a daily basis. If I miss that goal one day, I have to make it up the next. It’s still really difficult for me to start writing every day, but once I get into it, I really have to question why it’s so hard to force myself forward.

If I hadn’t set these goals, I would have never even finished my first book…now I’m in the midst of finishing up my fourth full length novel, with several others in different stages of development.

How did you decide how to publish your books?
Part of that decision was made for me, in a way. When I wrote my first book, I was certain that writing it was the hard part. Once I did that, I’d nab an agent and a publisher and would have my book on shelves within a year… In other words I knew absolutely nothing about the industry.

I found, however, that the process of finding an agent/publisher is a rather painful one. You’re rather lucky if you’re not receiving dozens (if not hundreds) of rejections before you even find someone willing to give your book an actual look.

In the end, I realized that it was much more fulfilling to own the process myself, all of the successes and failures of the book rest solely on my shoulder. That means I’m much more dedicated to making sure everything works. Of course I’d love to have a big publishing house behind me to help me get through all the nitty gritty pieces of the puzzle, but right now I have no interest in begging them to even read my stuff. I’d rather beg readers.

What do you think about the future of book publishing?
As with most authors, I’ve spent a long amount of time thinking about the future of publishing. Like with music and movies, books are in the midst of a very interesting revolution where anyone has the tools to cheaply produce entertainment for the masses…and people are reacting positively to that prospect.

I think we’ve got a long way to go before the dust finally settles on this revolution, but I’m sure that in the end, we’ll see something rather similar to the way things used to be. We’ve got a rather Wild West situation going on within publishing right now. Sooner or later the sheriff will come in and begin the reign of the publishers once again. I think it’s important to note that this is not the first time we’ve seen self-published authors taking over the charts. But sooner or later the folks with the money stepped in and getting backing from a traditional publisher was the only way in which to be seen. Once the folks with the money figure out how to use that money effectively, I think we’ll see that repeat.

But for now, readers rule the market, and that’s really exciting for an indie author.

What do you use?
Professional Cover Designer, Beta Readers.

What genres do you write?
Action/Adventure with a touch of sci-fi.

What formats are your books in?
Both eBook and Print.