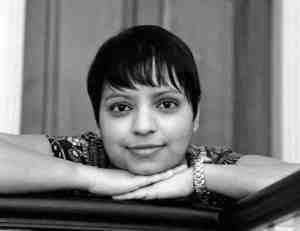 About AD Starrling:
A.D. Starrling is the author of the award-winning action thriller series Seventeen.

Born on the small island nation of Mauritius in the Indian Ocean, A.D. came to the UK at the age of twenty to study medicine. After five years of hard graft earning her MD and another five years working all of God’s hours as a Pediatrician, she decided it was time for a change and returned to her first love, writing.

Her thriller series Seventeen combines action, adventure, science, and a dose of the paranormal to make each book an explosive, adrenaline-fueled read.

Her debut novel Soul Meaning (Seventeen Series Book #1) has won and been nominated for several awards, as has the second book in the series. She currently lives in Warwickshire in the West Midlands, where she is busy writing the next installments in the series. She still practises medicine. AD Starrling is her pen name.

What inspires you to write?
I have many stories to tell and a vivid and overactive imagination that keeps coming up with fun ways to tell them. Music plays a large role in getting my creative juices going. There are many scenes in my novels that have come alive because of particular songs. I also get a lot of inspiration from my dreams.

Tell us about your writing process.
I’m a tweener, according to James Scott Bell’s “Write Your Novel from the Middle”. I always know how a story starts and ends and the biggest plot points within it. The rest of the plotting happens while I’m writing the book and is where the “seat of the pants” part comes in. I also get a lot of ideas from my research and my research happens on the fly. The only outlining I do is to jot down what I want to write everyday. This tends to take the form of simple notes like ‘A+E break into Army Base. Steal research documents.’

For Fiction Writers: Do you listen (or talk to) to your characters?
I very much listen to my characters and often laugh at/with them. I also roll my eyes a lot and say things like, ‘I can’t believe you’re thinking of doing that you sly dog, you!’

I tend to blush a lot when I get them hot and bothered in the bedroom. It feels like spying on your friends having sex.

I build bios for my characters as I get to know them and put these on my website under “Extras” after the book is published.

What advice would you give other writers?
Aim to improve your craft with every piece of work you write; never get complacent about your writing. Hire at least one professional editor and one or two proofreaders to look over your work. Study the industry, even if you’re traditionally published; there are many changes afoot and you need to be aware of them to make the right choices for your writing career. Have a production plan and a marketing plan, ideally 6-12 months ones. Build your newsletter subscriber list and offer your readers great value content. If you’re writing a series, consider making the first book permafree (ebook only) after you’ve published at least three novels.

How did you decide how to publish your books?
At the start of my writing career, I chased the traditional publishing dream. We all did in those early years when self-publishing was still equated with vanity publishing. After numerous rejections accompanied by repeated positive feedback over 3 years of submitting to agents and publishers, and almost landing two agents and a small publisher, I realized that there was an amazing and scary way to get my book out there. That was to self-publish. Joe Konrath was my inspiration to take that first step. Many other authors have since inspired me to continue on this road.

What do you think about the future of book publishing?
It’s in a state of flux, more so now than ever before. There will always be readers and a need for books. Self-publishing is allowing more people to publish today than ever before, so discoverability is becoming an issue. The way to overcome this is to write better and write more, which is what authors who are making a living from their writing have always done. Writers have to explore different ways of reaching their readers and that means embracing new platforms and fresh means of delivering your products to readers. The difference in income between successful traditionally published authors and successful self-published authors is getting narrower each day, with many self-published authors now making much, much more than their trad pub counterparts. That’s something to bear in mind when you’re thinking of which route to take.

What genres do you write?: Action, Adventure, Thriller, Paranormal