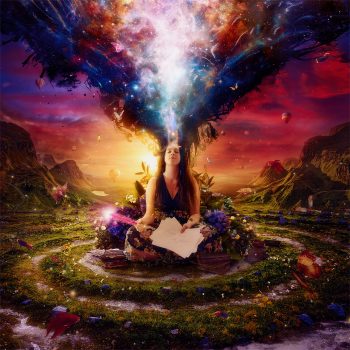 About A. A. Warne:
A. A. Warne writes elaborate, strange, dark and twisted stories. In other words, speculative fiction.
Located at the bottom of the Blue Mountains in Sydney, Australia; Amanda was born an artist and grew up a painter before deciding to study pottery.
But it wasn't until she found the art of the written word that her universe expanded.
A graduate of Western Sydney University in arts, Amanda now spends her time wrestling three kids and writing full time.

What inspires you to write?
I came into writing much different than other authors. I have an arts background and was always painting or making something, but after the birth of my first child, I couldn't commit to messy art anymore. It was the first time I lost who I was. A creative must create. One of my friends gave me a book and I laughed – I didn't read or even have time for that but she insisted. I read that one and ran out and brought book two then three and by the time I got to the end of the series, I started brainstorming my own ideas. I recognise that writing is an art practice for me, spending everyday following interesting characters and exploring their worlds.

What authors do you read when you aren’t writing?
I read really widely, both old and new books and recently I've jumped into translations of ancient texts. Even though I'm all about fantasy, my reading list might surprise you. If it's not about the unique parts of history, discovering lost civilisations, and archeology, then I'm diving into the world of psychology, biology and learning about the animal kingdom. So as you can see, my interests are vast.
As for authors, I love Homer's Odyssey; Karen Miller's Godspeaker Trilogy; Neil Gaiman's American Gods; and I've just brought my children (*cough, I mean me) all of Anh Do's books.

Tell us about your writing process.
For me, no two books have been the same. I find that each time I approach a story, I either know the world and trying to find characters, or a character has popped into my head and forcing me to take note of their world. I just allow myself to lean into whatever I think is right for that story and it's seriously funny because when I try and force something – like I want to see more of a certain element, it never ends up in the final writing round. It has to be cut because it doesn't mesh with everything else. So to be clear, the characters take control.
Once I know enough about the story, I draft a summarised version and that is to tell myself the story. Then funnily enough, I put it aside and don't come back to it, only referring to it if I forget and need reminders. Separating the telling and the showing is so important so the draft is all about telling and the final is all about showing, experiencing, feeling, knowing, etc. those characters.

For Fiction Writers: Do you listen (or talk to) to your characters?
Oh my characters talk alright. They either tell me everything I need to know or they stand there and stare at me confused as to why I don't instantly know everything. Those are the frustrating ones because each time I want to steer the plot one direction, they come back and point out where I need to make corrections and steer it a completely different way – like um, hello? You couldn't tell me that to begin with. Eli in The Reluctant Wizard popped into my head while I was trying to finish Concealed Power. He was patient and waiting for me, but he was a serious distraction, so I ended up discovering his story slowly while writing the other one. It was interesting to jump into both worlds at the same time and characters compete for my brain space.

What advice would you give other writers?
Writing is not a race and it's certainly not a competition. I stopped watching what everyone else was doing and put my head down to focus on what I was doing. I had a vision and I met people who supported that vision and moved on from those who either tried to push me another direction, or analysed my dream. A healthy writer is a writer who is putting words on the page. One word per day is enough, more than that is a bonus. Some days are so much harder than others and that's human. What's not normal is giving up, allowing people to say things that stop you from creating, dreaming and living. And most importantly, are you living your best creative life? Creatives have to create!

How did you decide how to publish your books?
After a couple of years I started attending publisher's open days and getting feedback on chunks of text. It was really insightful and helped me navigate the industry a bit more. Then once I had a full manuscript, I approached publishers. To be honest, I should have approached editors but I really didn't know the process. Self publishing was gaining a lot of traction and the opinions were very for either camp, and no blend of both. In the end, I had to figure out what was right for me. I'm the type of person that would learn everything I can before jumping in, but publishers were not forthcoming – who can blame them though – can you imagine having to explain the process to everyone. Anyhow, I thought I would publish my first book and then decide. I loved it so much that I published two books and one anthology in the first year. Does that mean I wont go down the trade route? No. I'm curious to see what they have on offer and have pitched some publishing houses lately. But at the same time, I'm concentrating on my writing practice with a full publishing schedule ahead of me.

What do you think about the future of book publishing?
I have always believed, and still do, that indie authors are powerhouses. They are so much more than creators of a story. However, indies are not appreciated because publishers publish and writers write – and there is that current thinking of why should there be a cross over of the two roles. A lot of authors will need publishers because publishing is a huge job that not everyone can do, and that's fine. I also think that trade publishers still have the hold over the market because there is some sort of power play over bookstores. Bookstores will naturally go with the safest product to gain the easiest sale. For us independents though, we have to work so much harder to prove our worth. Once booksellers recognise us as even competitors, that's when trade publishers will lose their power and indie authors will eclipse them.

What genres do you write?: Speculative fiction. Fantasy

Website(s)
A. A. Warne Home Page Link
Link To A. A. Warne Page On Amazon
Link to Author Page on Smashwords