You are here: Home / Fiction / Science Fiction / Intelligenz by Lloyd 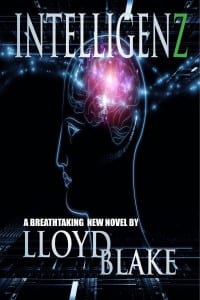 Atlanta, Georgia. Something disturbing is happening at one of America’s most successful tech companies. A girl is found dead in her home shower cubicle. A home linked to the Intelligenz corporation network of technologically advanced gated communities. This suspicious death, in a world where everything is scrutinised by the media, sets off unprecedented interest.
A young rookie journalist, Clara Flockhart, is assigned by her chief editor, Eric Nash, to investigate the strange happenings at the Intelligenz compound. An assignment that will plunge her into the unknown and lead her straight to the man whose company is being rocked by events outside of his control, Brandon Bloomfield.
At the same time, a young college dropout, Karl Jones, has his own suspicions about the recent death and the gated community that has overtaken his neighbourhood. Suspicions that will see him undertake his own exploration of the Intelligenz compound, he calls the fortress.
As the body count climbs and the nanotechnology, Intelligenz has secretly guarded, comes under scrutiny, the mysterious riddle as to what is actually happening deepens.
Is there a saboteur lurking within the corridors of the fastest growing company in America’s corporate history? Or does the darkness come from an unlikely source.

How is Writing In Your Genre Different from Others?
I like writing in the science fiction genre and always have done so i’m not really sure of the main differences. I would say maybe that the worlds you create have to be extremely vivid and imaginative because of the technology you’re trying to create and make real to the reader. I would say when I write I always put characterization ahead of anything else. So my stories are character driven. My characters think, they hurt, they cry, they love. They’re emotional. They have a back story that could relate to any writing genre, the only difference is they are placed in a technologically advanced world.

What Advice Would You Give Aspiring Writers?
Write about something that inspires you. Don’t write about something that you already know about. That may sound strange but I like to write about a subject that I know little about. I like to do the research and gather information and learn as I write. It keeps writing for me interesting as the writing process can be long. Don’t assume you have all the answers as a writer because you don’t. Just be as creative as possible and make the reader believe what you’re writing.

Author Bio:
Lloyd was born and grew up in London, England. From when he can remember, he always took a keen interest in books and literature. Lloyd loved reading comics and enjoyed writing short stories. It was only when he was doing his University degree in business and marketing that writing a full novel seemed extraordinarily alluring – and thats what he did.

His first novel called ‘the fight for naturah’ was released in 2009 and soon after this he started writing ‘Intelligenz.’ Lloyd writes in the genre of science fiction with fantasy elements. Preferring this genre as he feels he can be as creative as possible and explore colourful and at times dark worlds in this genre.

His second novel titled ‘Intelligenz,’ was published in December 2012. An exciting action packed novel with a thought provoking narrative.

What Inspired You to Write Your Book?
I was inspired by the technological revoultion that is taking place in our world right now. The rise of the smart phone, the social media takeover, what we can do with the internet now with the speeds it can take. Everything around us seems to be technology led and we seem to be putting all of our faith into these forms of technology implicitly and I just wanted to write a story that said hold on a minute, what if the technology we trust so much was not working to benefit us humans but was in fact becoming corrupt and actually destroying us. In a way it is a little ironic because some would say these forms of technology are in way changing the social fabric of society not necessarily for the good.
My book deals with a new form of technology known as nanotechnology and how that technology is handled by a corporation that seems to understand the technology but doesn’t know everything and the fall out from this when consumers are confronted by technological malfunctions and how a community copes with the impending disaster.