You are here: Home / Fiction / Action & Adventure / Inside Out by Jack Kearney 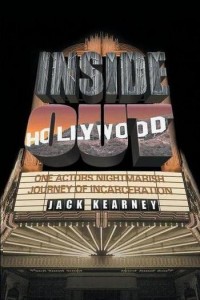 Inside Out weaves together an engrossing story of a young actor who, after volunteering for a unique project to teach drama to inmates of the local medium-security prison,months later finds himself locked in a cell as a convict. It introduces the reader to multitude of characters. Some are good, some are bad, and a few are just evil.

It is a fictional account of what happens to an “Everyman” that gets caught up in a system deliberately designed to treat all felons the same. Utilizing a groundbreaking format, Follow Danny Belson as he goes from a care free beach volleyball loving, pool shooting, actor, who’s only worry is knowing when his next audition will come, to a convicted murderer. Written using flashbacks, with no chapters, learn what a struggling actor goes through, and how, after his incarceration, Danny’s life is turned INSIDE OUT.

What Inspired You to Write Your Book?
My book was originally a script that came out of a drama workshop I attended in Hollywood in the late ’70s. I had an opportunity to teach an improv workshop to the inmates of a Federal prison. I just thought what would happen to someone in that same situation that after six months ends up back inside as an inmate. He now has both friends and unforgiving enemies.

How Did You Come up With Your Characters?
The main character Danny Belson was easy because he is me at that age. He is an actor who’s career is much farther along than mine was, and his experiences a tad more thrilling, perhaps. Many of the characters are based on people I’ve known or have, in the case of the inmates, met. A former teacher, my brother, and quite a few people I’ve crossed paths with in the numerous bars over the years, have all been exploited on my pages.

Book Sample
Danny Belson is a trained actor, who is also the rarest of rare, a working one. He is turning the big 3-O soon and his rugged good looks have always made casting agents type him as a “bad boy”. So during his career he was use to having cuffs on. But these were the real thing and they were secured tightly to the seat in front of him. Tight enough so that when the bus surged forward they dug into his skin. As the bus pulled out of the LA County Twin Towers Correctional Facility, Danny knew where they were heading, he had been their once before; The Medium Security Federal Prison in Lompoc, Calif. All that Danny could do was stare out the widow, fight the urge to cry, and think about what could have been.
This was finally his year. All his hard work was starting to pay off. The countless toilets he had cleaned, thousands of advertising pens he had sold, and endless tables of yokel tourist he had waited on, was finally behind him. Also he had landed a recurring role on a major soap, and finally had broken through the LA’s crony ninety nine seat theater barrier. He had already had leading roles in several critically acclaimed plays. As the transport bus slowly rumbles on the familiar sites of Los Angeles reminds Danny of his first year in Tinsel Town.
________________________________

After graduation from SF State in ’72, Danny moved to LA. Although with his looks and manner most of his friends and professors thought he would do much better in New York, Danny was scared to make that kind of a leap of fate. He always had thought that he would be able to crawl home if by some unbelievable stretch of the imagination, he were to somehow fail. Armed with all his great reviews Danny figured it would only take a couple of months to land a good agent. Even while performing on stage everyone would comment that he had the IT factor and that the camera would eat him up. From his deep blue eyes, that had a bit of squint from his refusal as a youth to where his glasses, to his just under six foot muscular frame, Danny had always known that Hollywood was calling.