You are here: Home / Bargains and Freebies / Bargain Books Under $3 / Indian Summer by Suzanne D. Williams 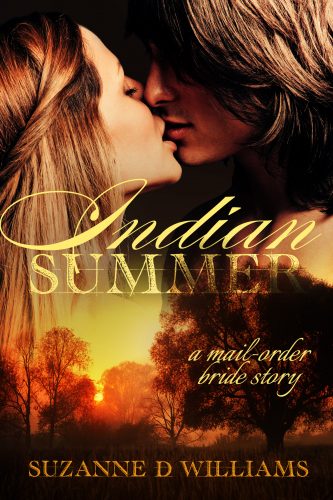 Ona Privett accepted the marriage proposal of a man, sight unseen. But when she arrives at the edge of the Florida wilderness, the man she thought she’d come to marry, young John Cole, knows nothing about any correspondence. Nor is he interested in being tied down, relying on his mother’s Native American ancestry to survive. That ancestry forms poisonous bigotry in the local townspeople, powerful hatred that, despite their growing feelings for each other, might be too strong to overcome without their faith in God.

What Inspired You to Write Your Book?
I was captured by the idea of a young man straddling two worlds, his Native American ancestry and his father's Caucasian ancestry, and how his father's wishes for him to marry, would collide with the freedom he thought he wanted. I asked myself what would happen if his bride was determined to make things work. By mixing in my love for Florida history, I couldn't wait to write it.

How Did You Come up With Your Characters?
I am a pantser. I researched the Seminole Indian tribes in Florida and how they would have interacted with the Caucasian population. This formed the basic idea of John Cole. The remainder of his personality came into being as I wrote the book. Ona, I took from stories of women of the time and from other historical romances I have read, a girl who is seeking her fortune but unprepared for what she's decided to do. Their interaction with each other and the unfolding plot enriched their personalities.

Book Sample
He rose from his chair and looked down on her. “I’m sorry for your trouble … if you’ve traveled far for any purpose. I will see to it you return to town safely.”

Return to town? Shocked by the suggestion, she leapt to her feet. “I cannot return. I’ve given up all I have to come here and haven’t a dime for passage or anywhere to go even if I could leave.”

His brow drew tight, worry forming on his features.

“This was to be my home, your father, my future.”

“No future at all,” John said. “He was dying when he wrote you, and there is only me left.”

Her mind flitted back the months, as if scrolling rapidly through her and Absalom Cole’s letters, and in an instant of time, the pieces fell into place. Sucking in a breath, giddy almost, she gasped and repeated one particular portion beneath her breath. “It seems rushed,” she said, quoting the letter, “for me to do this now, but time, I’ve found, passes quicker than you’d think and what we leave behind becomes ephemeral ….” She lifted her gaze to his. “He did this for you.”

The worry John had displayed expanded.

A lump in her throat, she forced the feeling downward and approached, halting a foot away. The state of things here attested to it. He’d known his son needed a woman’s hand and sought to take care of it before he was gone.

“He loved you very much.”

John, for the first time, seemed shaken, and she saw that love had been greatly returned.

But, though she’d never met Absalom Cole, she believed different. For there, in front of her, was evidence otherwise. She didn’t remark on it, but concentrated, instead, on the moment.

“I am sorry for your loss and in exchange, for mine. But, John, I am your father’s last wish, the bride he’d sought not for his companionship, but for yours.”

A shiver took hold, the dampness of her clothing chilling her, and distracted from his denial, she sneezed. “I … must get warm,” she said. Or she feared contracting an illness. But she hadn’t anything dry, her things soaked in the rain.

John took her arm, concern on his brow, and led her to the rear where a bed stood in a semi-concealed nook. From a dresser, he removed a man’s sleeping shirt. It was large, would hang well below her knees. “I will go,” he said, “leave you to change.”

Without another word, he vanished back into the rain, and she stood there, shaking violently, wondering if he felt the drops at all or was instead made from them. A vision formed of mist and soil and sky.