You are here: Home / Fiction / Mystery/Suspense / In the Shadows of Death: A Detective Agni Mitra Thriller by SOURABH MUKHERJEE 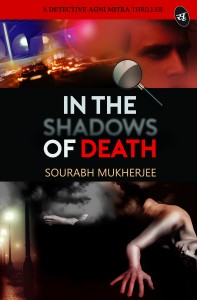 Sheetal Mehra, HR executive with Crescent Technologies, is found murdered in the toilet of a Kolkata hotel after an office party. Assistant Commissioner of Police Agni Mitra finds out about her adulterous ways as he starts investigating into the murder. The miffed husband, a lecherous boss, one of her many jilted admirers – anyone could have killed her. The investigation is stuck in myriad perplexing questions when the murder of Meenakshi Menon, a Director with Altius Finance, hits the headlines. As more murders rock the city, it is not too long before the battle of wits with his unseen adversary turns personal for Agni.

A ruthless killer walking the rain-washed streets of Kolkata. A detective battling storms brewing in his private life. Human relations infested with deceit. A generation struggling to cope with fast-changing ambitions and desires.

In the Shadows of Death is a gripping page-turner with a heart-rending emotional core.

What Inspired You to Write Your Book?
Being an avid reader of crime fiction myself, I have always harboured an ambition to make my own humble contribution to this genre. The story, of course, had its germs in my own interests in human psychology and in the complexities of human relationships, especially in these times of changing social order in India.

Also, it does not make me too happy to note that, whenever we speak of popular detectives in English fiction, we end up naming characters created by non-Indian authors. With so much of quality fiction being written in India in the English language, where is that one pan-Indian character that is a brand by her or his own right and has instant recall? So, I asked myself, why not make a humble effort to create one in ACP Agni Mitra?

How Did You Come up With Your Characters?
The story explores the dark recesses of the human mind and the stark realities of urban life in contemporary India. The depiction of unpredictability of human behaviour, and the complexity of human relationships in the novel has roots in my keen interest in psychology.

My characters are not all black and white, and I am never judgmental. I offer reasons for their actions, which primarily have their roots in past experiences. The insecurities and vulnerabilities my characters suffer from, and the inner devils they battle are all very real. The setting also reflects my own experiences in the corporate world, thanks to my association with the industry for almost two decades.

When I look at Kolkata today, I see a city in the cusp of change. Contemporary Kolkatans are from a generation that is ambitious and ready to embrace ‘the good life’. It is a generation which has seen its parents struggle, yet has barely gone through that struggle itself. And for many, there is a singular focus on fulfilling their own desires and ambitions. In the process, Kolkata today is experiencing a significant change in its societal structure and core ethics of its people. This has been a key motivation behind my story.

Book Sample
You clap around a mosquito buzzing around in the air conditioned comfort of your car and it dies right away. Now that isn’t a whole lot of fun, is it? You end up with a blood stain and the shapeless, lifeless remains of a blood-sucker squashed on your hands. That’s about it. The end. No drama.

Now consider this. The mosquito doesn’t die right away. Maybe you didn’t get the angle right. Maybe not enough force to kill. But enough to make it land on the dashboard, dismembered. Maybe a leg torn off. The flight interrupted. And you watch it crawl on the dashboard. Trying to fly. Trying to escape the imminent death staring it in the eyes. And failing every time. And then you get into action. You chop a wing off and then perhaps another. Maybe a couple more legs go next. And in your mind, you clap in glee as you see its mutilated form crawl around, the taste of your blood it sucked a while back still fresh in its mouth, still holding on to its impossible hope of flying out of what would be a miserable death.

Now, how far have you gone? Have you ever gone to the extent of snipping off all its legs and wings but taking care not to kill it? I did that just now, as the traffic signal remained red.

What a sight! The life slowly ebbing away, all the hope of flight slowly vanishing. Till I finally squeezed his life out between my fingers. Right there, on my dashboard.

There are so many ways to keep yourself entertained when you are caught in a red light. But nothing beats the joy of relishing slow but certain death.

The mosquito lying dead on my dashboard reminded me of the human beings I have seen dying. Too hurt, too breathless, too helpless but still fighting. The urge to live was universal. So was the urge to suck each other’s blood. Nothing beats the joy of seeing someone suffer.

The traffic signal was still red and counting down. There were school children crossing the road – girls in their white shirts, blue skirts, plaits and happy faces. I kept looking at them, and remembered her. The year was 1999 and I was fifteen. A summer afternoon.

Buy In the Shadows of Death: A Detective Agni Mitra Thriller On Amazon