You are here: Home / Fiction / Mystery/Suspense / In the Beginning by Elle Klass 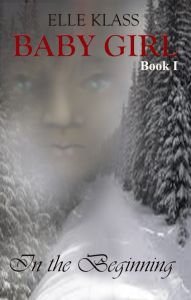 Book 1 in the Baby Girl Series.
Follow Cleo on her epic saga which begins when she abandoned by her mom at twelve. She has no other family which she is aware of, and in order to survive she leaves her home and lives on the streets. She meets interesting characters and gets into amusing predicaments all in the name of survival, such as jumping trains, being chased through the woods by a crazy man with a loaded shotgun and witnessing an unspeakable crime. After a few months on the streets she runs into another group of kids, Einstein is the oldest and a leader in the group, and they form a family of sorts. For survival and money they lean towards a life a crime which inevitably breaks up their family and sends Cleo and Einstein spiraling into their own adventure. Eventually they settle into a “normal” life however their pasts can’t be hushed forever …

What Inspired You to Write Your Book?
It wasn’t any one thing. I was on an extended vacation and just finished a rough draft of another novel when the idea for the Baby Girl series struck. The idea of a young girl against all odds, with brains, and tenacity who doesn’t become a victim of her environment. Deep down I always root for the underdog and Cleo is the ultimate underdog but she turns it around. We all encounter unthinkable odds in our lives, some more than other, what makes the difference is how wedeal with it. Don’t give up is my inspiration.

How Did You Come up With Your Characters?
Cleo was mine from the start. I pictured a young girl, thick dark hair, caramel skin, and big, lonely emerald eyes. Her personality developed as I wrote. The other characters wrote themselves in so to speak. I didn’t plan them but when the time came they stepped in and up to the plate.

Book Sample
The city lights dwindled into sparse street lights and trees. My lungs filled with exhaust fumes, and my body felt as though a jack hammer pounded it into a pulp. The truck slowed, turned and abruptly stopped, our heads slamming into the back of the cab.
The door creaked open and a heavy foot hit the ground then another, his footsteps cumbersome along the pavement. Next they halted and lumbered their way back. With the truck bed so junky we had nowhere to move. We looked at each other and then at the huge hairy hand that forced its way over the truck bed, we both jumped out and ran. “What the fu…” He called, but we scurried into the woods surrounding his house. I rested myself against a tree to catch my breath. The prickles in my side bore the illusion that a thousand knives were poking into it. Einstein fell to the ground, both of us panting.
“This is eerie… hmm… What is it that happens to teens alone in the woods?” Einstein asked widening his eyes into basins of fear.
“Nothing more than teens alone in the city with many types of nutcases.”
“Really, haven’t you ever been to the movies?” A look of curiosity flashed across his face.
“No, never.” The sadness in my own voice resonating inside me.
“There is always a crazy stalker with a machete or chain saw waiting to chop up innocent teens.” Einstein declared, still wearing his fear face.
“I grew up in a place like this, the woods surrounding me. I was more scared alone in the city with so many people until I found you. It was creepy, and I kept myself hidden at night.” I allowed my body to crumple next to his, we lay on the forest floor, his arms around my waist.
As the morning sun peaked, we continued our journey to the nearest town. Neither of us had any idea where to find the road, so we kept on a straight path through the woods. Birds chirped and squirrels chattered in the trees. We followed a stream we found.
“Hold still, I hear something,” whispered Einstein.
Keeping still with our ears open, we both heard a loud chink-chink sound. He grabbed my waist, pushed me behind him and we crouch walked behind a bush. The heavy footsteps pounded the forest floor until they were on top of us. We peered through the bush and saw him, the same man in whose truck we hitched a ride. He carried a shotgun in his hands. We sat still as the hundred year old redwoods we hid behind until he turned and left.
My heart slowed inside my chest. He turned back suddenly, and in an instant, raised his gun and shot through the bush. The pellet whizzed past my forehead. Quick as lightning, I jumped to my feet and headed anywhere but there. I heard Einstein behind me and the man’s heavy footsteps followed in pace. I ran through brush, jumped over hundred year old tree roots, my legs gaining agility as I jetted through the woods. Another chink-chink sound followed by a shot deafened the forest, but it wasn’t even close. My body took on a flight of its own, stopping when I got to the road.
I looked and Einstein was beside me his long legs in stride with my short ones. A few cars buzzed past us honking their horns and the man stomped back into the forest, defeated. We made it to the other side of the road after playing chicken with the traffic.
A car pulled over beside us. The people inside the car, a middle aged man and woman with friendly faces, rolled down the window and asked, “You kids need a ride?”
Einstein grabbed my hand and replied, “Thanks.” We piled into the vehicle.
The man narrowed his eyes and inspected us. “Where you headed?”
“Back into town.”
“What are you kids doing out here this early in the morning?” A hint of prying noticeable in the woman’s tone.
“Camping with friends. Claire twisted her ankle and her boyfriend Jack took her into town. We figured we’d wait it out, but it’s been too long.” Einstein replied with a fantastic lie that eased off his tongue as if it was truth.
“In these woods? They are privately owned by Crazy Man Shaw. You must not be from around here.” The words rolled off her tongue.
“We know that now.”
Einstein followed up with, “We’re from the city.”
The couple continued to talk with us probing our minds, looking to poke holes in our story, but they got us into town and dropped us at the hospital. We thanked them, waited for them to leave and walked to a diner across the street. We ate and got directions to the bus station. Towns this small were dangerous for two runaways.