You are here: Home / Autobiographies, Biographies & Memoirs / In My Shoes by Brenda Hampton 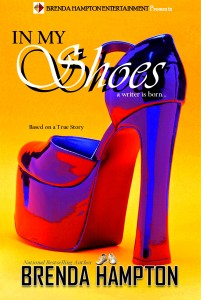 What inspired you to write your memoir?
What inspired me to write In My Shoes is I needed to heal myself from a past that I wanted so desperately to forget. But writing this story helped me realize that I would not be the person I am today without the many challenges I faced as a child/teenager.

About your Book:
At the age of sixteen, Brenda Hampton had been kicked out of one high school, trying desperately to find her place in another one. Lost, confused and with no direction, Brenda gravitated to bad boys who gave their all in the name of false love. When Dwayne Montgomery came on the scene, his definition of love would tie her to a seven year tumultuous relationship with no end in sight. It wasn’t long before she became handicapped by the welfare system and addicted to shoplifting. She was classified as a negligible teenage mother, and her ten dollar a month Section 8 apartment was closing in on her.

Brenda’s vision of what her life could be faded with every minute. Her long ago aspirations were blurred and her escape plan led to a dead end. Eventually, her reluctance to take control of her life served up an eviction notice, an ongoing fist-bumping relationship and possible jail time. Life didn’t seem worth living, and suicide appeared to be the only option.

A wake-up call was needed, and realizing that a change had to come now, or never, Brenda turned to the one thing she could always hold on to—her notebooks. For years, her notebooks had been like a best friend, one she could share her deepest secrets with and rely on them not to tell a soul. The connection with her mind and a piece of paper was like magic, offering her the peace she so desperately needed and the freedom to spill words of joy, sadness, and, often times, pain. She felt another jolt after reading Terry McMillan’s, Disappearing Acts, and once Jay Rogers, from the book series we now know as Naughty, entered her world, Brenda had an epiphany that prompted her to pursue an alternative mission in life. With her life on the line, it became evident that there was no way for Brenda to walk away from her chaotic situation, she had to run! Only In Her Shoes could she figure out a master plan on how to do it, and do so without breaking a heel

How did you decide how to publish your book and where is it published through:
While I am a traditionally published author, I decided to utilize Amazon’s services for publishing my book. I love the opportunities they have made available to authors and I took full advantage of it.

How do you see writing a Memoir as different from writing other genres of books?
Writing a Memoir was very different. I had to be extremely careful about who or what I wrote about, and I also had to think about what, throughout my entire life, was the most important. Basically, delve into the things that truly made a difference and include issues that readers could relate to. I wanted to make sure I inspired others as well.

Author Bio:
Brenda M. Hampton is a native St. Louisan with a gift and passion for writing. She maintained journals for several years, but it wasn’t until she read Terry McMillan’s Disappearing Acts, it prompted Hampton to explore writing in ways she never thought was possible.

In early 2002, Hampton began crafting her memoir, In My Shoes, along with two fiction novels: Two’s Enough Three’s a Crowd and How Can I Be Down? The following year, she completed thrilling sequels to both fiction novels and additional bestselling books followed thereafter. To her credit, Hampton has written more than twenty-plus novels, novellas and anthologies. She is mostly known and recognized for creating one of the most addictive book series in literature, The Naughty Series.

Praised as the writer who brings the heat, Hampton’s literary career is filled with many accomplishments, one being a National Bestselling Author. Her name has graced the Essence Magazine Bestseller’s List, she was named a favorite female fiction writer in Upscale Magazine and is also named in the Top 100 Most Admired African American Women in Literature. Hampton’s mystery novel, The Dirty Truth, was nominated for an African American Literary Award, her reality TV drama series, Hell House, was named 2012 top book choice by the Sankofa Literary Society, and Hampton was awarded by Infini Promotions for being the best female writer. Hampton’s dedication to her career, and writing skills, led to a multi-book deal through Urban/Kensington Books in New York City, a major publishing house she refers to as her literary home. She also has literary works published and distributed by Strebor/Simon & Schuster.

In addition to writing and having an entrepreneurial spirit, Hampton is the founder of Brenda Hampton Entertainment, LLC. BHE is a reputable brand, revolving around all things in the entertainment arena, including books, movies, plays, etc. The primary goal of BHE is to work with and promote motivated, skilled and talented individuals who deserve an opportunity in many of the challenging and competitive industries that are difficult to get into. Through making vital connections, the objective is to open doors for unique individuals who seek to live out their dreams in the field of entertainment.

In an effort to show appreciation to her colleagues in literature, Hampton created The Brenda Hampton Honorary Literacy Award and Scholarship Fund. The award not only celebrates writers, but it also represents unique individuals who put forth every effort to uphold the standards of African American Literature.