You are here: Home / Fiction / In Just One Moment by Duane Boehm 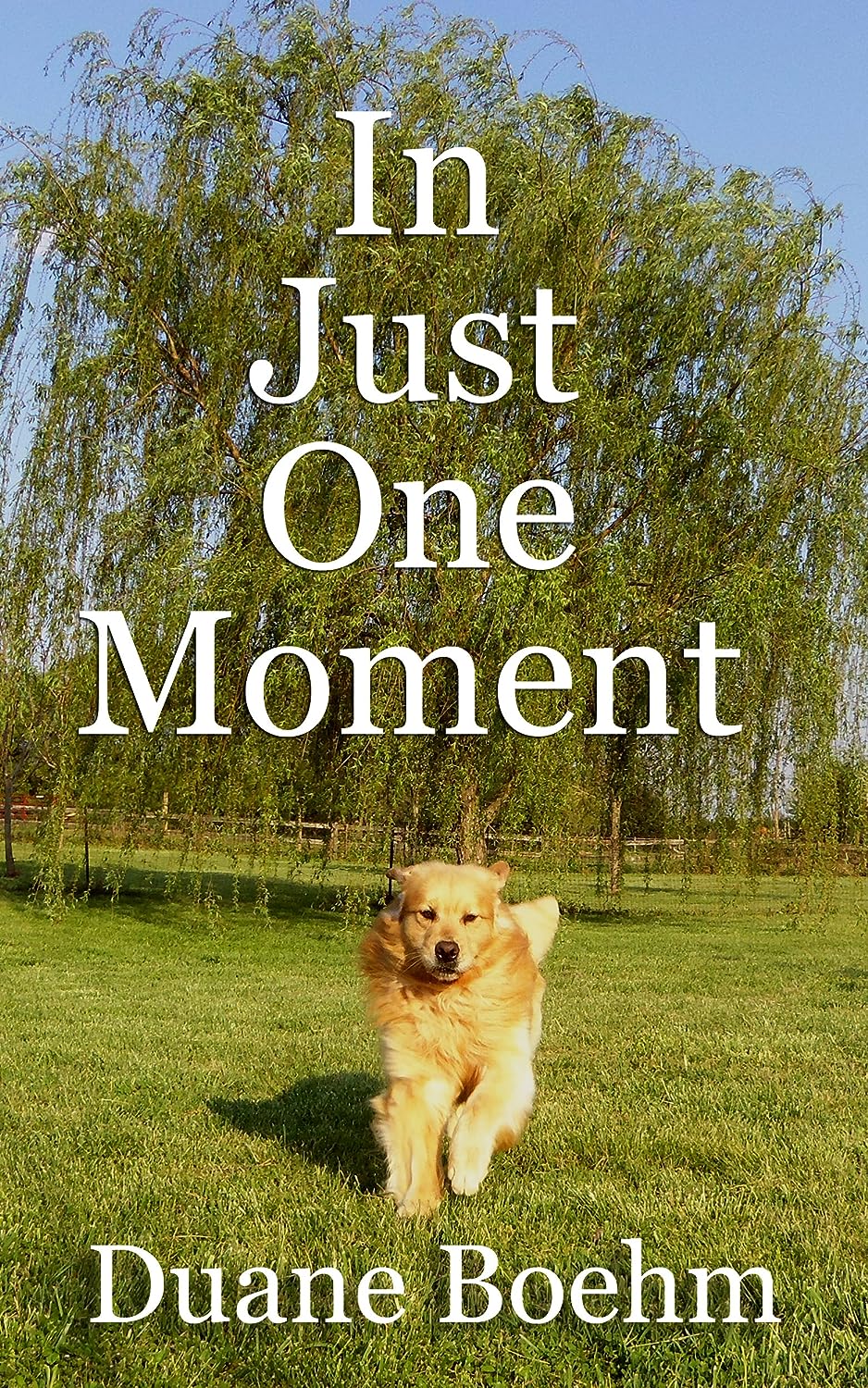 In Just One Moment is a story that centers on the lives of three people that are left to deal with the aftermath of a tragic Christmas day car accident. Noah Saxon loses his wife and daughter in the accident, thirteen-year-old Samantha Bragg loses her best friend, and Willie Bragg begins to lose his daughter and his best friend as anger and guilt begin to take over their lives. Also complicating the situation is a Golden Retriever puppy that was a Christmas gift from Noah to his daughter that due to circumstance, Samantha inherits and nurses back to health.

The three find themselves ill equipped to handle the seismic change that has come into their lives. Samantha, an honor student and star athlete, loses all interest in school as she isolates herself from everyone except the puppy, Schroeder. Noah lets his promising career slide when alcohol becomes his escape. The two have continual confrontations, testing Willie’s loyalties as he vainly tries to save each of them from themselves and each other until it all comes to a head the following Christmas.

In Just One Moment examines the chaos that an accident brings to the lives of ordinary people and ultimately seeks to answer whether a man that loses everything including hope can find redemption and if an anger-filled girl can learn forgiveness.

Targeted Age Group:: All ages from teenager and up

What Inspired You to Write Your Book?
One Christmas after watching “A Christmas Carol” I was moved to right my first novel after years of writing short stories. I knew I wanted to right a story about forgiveness and redemption. In Just One Moment was the result of that desire.

How Did You Come up With Your Characters?
I developed them based on what the story needed to be told effectively.

Book Sample
“Mom, can I call Samantha so that she can come over and see Schroeder,” Erin asked her mother.

“Erin you know we have to head to Grandma and Grandpa’s for Christmas dinner in a couple of hours,” Alison replied.
“Sam has just got to see Schroeder,” Erin insisted.

“Maybe Samantha would like to spend Christmas morning with her own family.”

“Mom, Sam and I have been coming here or going there on Christmas morning since we were 5 years old.”

“Call her then,” Alison said in surrender.

“Thank you. She is going to go wild when she sees him,” Erin remarked.

Samantha was the daughter of Willie and Renee Bragg. She and Erin carried on another generation of Saxon and Bragg best friends. Three months younger than Erin, they had never known life without each other and much like their fathers, they were more polar opposites that rounded each other out than a matched pair. Samantha was sensitive and serious, a near straight A student. Erin was gregarious and only took school seriously when it behooved her or when her parents cracked down on her. Even their appearance was starkly different with Sam being a petite and pretty blond with a pageboy haircut and Erin towering over her with her trademark mass of red curls. Erin was the ringleader, Samantha the follower. With their houses only six hundred feet apart and fifty acres that their fathers had split to roam on, they were inseparable in their adventures.

Erin called Samantha, and after a near verbatim exchange with her mother, Samantha was walking through the snow and cold on the well-worn path to Erin’s house with the resolve of a soldier on a mission. Erin opened the door with Schroeder still cradled in her arms asleep.
“Oh Erin, he’s so cute, let me get my coat and boots off so I can hold him,” Samantha said.

“He’s just it, isn’t he,” remarked Erin in an awestruck voice as she handed him to Sam. Schroeder opened his eyes for a brief moment to see the new person holding him, then drifted back off to sleep.

“He really is a nice pup. He has a great head and good bone. Don’t you just love puppy breath,” Samantha remarked as she leaned into his face. She had inherited her dad’s love of animals and with his clinic at their house, she had been helping him for as long as she could remember, developing a vast knowledge of animals that had become second nature.

“Did you know I was getting him,” Erin asked.

“I knew your dad and mine were up to something and I figured it had to be this. You know he always gets you what you want,” Samantha chided.
“We’re going to have so much fun with him. Think of all the things we can teach him,” Erin said.

“We can get some books on dog training so that we can do it right,” Samantha remarked.

Erin rolled her eyes and changed the subject, “Let’s go into the living room. I got your present in there.”

Sam went to her coat, pulled out her small package for Erin, and followed her into the next room. “You go first,” she told Erin.

Samantha gave her an annoyed look. Sometimes it got old always being the follower. “Erin go ahead and do it my way for once,” she said.
Erin acquiesced and tore the package open. Opening the box, she oohed when she saw the bracelet with a friendship charm on it. “It’s so cool. Put it on me, please. The Saxon family sure made a haul in jewelry this year,” she commented and then handed Sam her gift.

Samantha opened the present to find a collector’s edition of the book “The Top 500 Poems”. In her studious way, she quickly glanced through the table of contents. “This is a really great book of poetry. It has a bunch of my favorites in it. I bet you made your mom buy it for you so no one would see you with poetry,” she teased. “Thank you.”

“Don’t blame me if reading all that stuff rots out your brain,” Erin warned her.

Sam smiled at the insult. “I guess I will have to take my chances.”

“I just love this bracelet. It will be like having a little piece of you with me wherever I go now. Thanks,” she said.

Noah came into the room, scratching his shaggy head, looking for his keys. “Hi Sammie, I didn’t know you were here. A very merry Christmas to you.”

Sammie was a name that she hated to be called and if it were anybody else on earth, she would have never let him get by with it, but he was her godfather and always treated her as if she was his second daughter. More than once he had filled in for her dad when a last minute emergency came into the clinic. He had taught both of them how to ride a bike and throw a ball. If he and Erin were having a father-daughter outing, he made sure she was there in the middle of it.

She walked over to him and gave him a kiss. “I got to get back home. I’ll see everybody tomorrow. Merry Christmas.”

As Samantha let herself out, Noah turned to Erin. “You better get ready. We’ll be leaving in a little bit,” he told her.

“Okay Daddy. Can I bring Schroeder with us,” she asked.

“It wouldn’t be nice to leave him all alone on Christmas, now would it,” he said.

“That will be used against you the next time you’re mad at me,” he told her.

Erin smiled and delivered her best “Whatever.” She then made a dash past him towards the stairs as he vainly attempted to stretch his lanky frame far enough to swat her.

He grinned at her and said, “Don’t think I can’t catch you if I wanted to.”

Alison came into the living room from the kitchen with her mouth drawn and forehead furrowed. “Have you looked out lately? It’s snowing awfully hard and the wind has picked up. We must have six inches of new snow already. Do you think it’s getting too bad to head to see Mom and Dad,” she asked.

“Hon, we just have to go to the other side of town,” Noah assured her.

“The sky gets grayer looking every time I look out,” she said.

“We will be fine. They will have the roads plowed. So quit worrying,” he told her.

“This is why I tell you that we need a four-wheel-drive Explorer,” she continued.

“The Mustang will do just fine. We might have a little trouble getting out of the driveway, but that will be it,” Noah insisted.

He decided to go warm the car up for the puppy and scoop the sidewalks clean. When the car was toasty, they piled in and headed towards town. Now that he had Erin as a captive audience, he was going to take the opportunity to tell her about some of the things that would be required of her to raise a ten-week-old puppy. He was telling her all about taking puppies outdoors immediately after they woke up from a nap when Alison interrupted him.

“Noah, please quit looking back at Erin and pay attention to these slick roads,” she said nervously.

He kept on talking to Erin, giving Alison only a smile. There was no way he was going to pass up the chance to impress upon Erin that Schroeder was hers and her responsibility.

Alison’s scream startled him so much that he hit the brakes too hard and the car’s backend started coming around. “Damn it, hold on. We’re in for a ride,” he swore as he let off the brakes and tried to correct it. He knew that they were in trouble. As he wrestled with the car it seemed as if they were in the Zapuder film playing in slow motion. The car straightened back up but had it barely slowed. Entering the intersection, he saw the four-wheel drive headed toward their passenger side. Frame by frame he watched the vehicle keep coming as he tried to avoid it. He could even see the look of horror on the driver’s face as he too tried to maneuver to keep from hitting them. Alison screamed again and Erin cried “Daddy” and clutched Schroeder tightly to her chest to try to protect him. The truck t-boned them dead center on the passenger side. Schroeder ripped violently from Erin’s arms, ricocheting off the other side of the car. Noah bounced as if a rag doll kicked down endless flights of stairs as everything was going in fast forward now. He could hear the steel bending and tearing, the glass breaking, and feel the world spinning, enshrouded all in white. Then it was over. The smell of hot anti-freeze drifted through the air and it was amazingly quiet now save for a radiator hissing and a puppy whimpering.

About the Author:
Duane Boehm grew up on a farm outside of Petersburg, Illinois. All the time spent driving a tractor gave him plenty of opportunity to let his imagination run wild and not tear up too much equipment. The two passions he developed early in life were the love of playing guitar and reading books.

He eventually moved to a mini-farm outside of Murfreesboro, Tennessee with his wife and replaced planting corn with trees and raising dogs. For a number of years he worked as an IT consultant and continued with being a part-time musician and songwriter. He dabbled in writing short stories with the idea in the back of his mind that someday he would write a novel. One Christmas after watching “A Christmas Carol”, he was inspired to begin his journey as a novelist.