You are here: Home / Fiction / Action & Adventure / I Will Not Yield by Bill Hogan 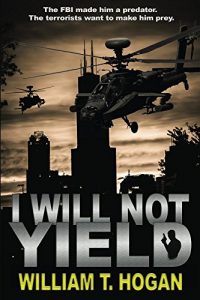 The FBI made him a Predator. The Terrorists want to make him prey.

A heart-pounding novel of suspense.
After Chicago is devastated by a series of terrorist attacks, white hat hacker Michael O’Connor and a former FBI agent have a razor thin chance to prevent World War III. That is if they survive.

Mike
Several months after Mike won the UFC Championship, the bout faded into a distant memory. Mike’s body and pride have recovered, but his spirit remained shattered. Life had never been easy for Mike. With his past haunting him, he blamed himself for his parents’ death. He wanted his life to be miserable. A penance he needed to pay to appease his guilt. The terrorists grant him his wish.

Sokol
Nikolai stood after crash landing on the forest bed; he gripped a large blade coated in blood. His opponent’s head was tethered by a thin strip of skin, eyes wide-open, surprised. It was at that moment Nikolai became Sokol. Branded after Russia’s deadliest bird of prey. Sokol and his elite team of terrorists plot the destruction of the United States. Mike will be their unwitting accomplice.

“The story ranging from the opening scene to the action in Central Park is exciting, bordering addictive. Your descriptions of the Chicago bombings are bound to frighten a large number of inhabitants! Mike is a great character.”
BlueCat Review

HERE’S WHAT READERS ARE SAYING ABOUT I WILL NOT YIELD:

★★★★★ “The book was great! This is not the typical type of book that I would read but I am so glad that I did. The author had me glued to the story and not wanting to put it down from the beginning. I read the entire book within a few short days because it just kept me wanting more. I can’t wait to see another book from him. I would highly recommend!”
—Kim Moulton

★★★★★ This was a real thriller. I got this yesterday and couldn’t put it down. I hope Mr. Hogan has more coming as I am now a fan of his. Fast paced techno- terrorism. Good stuff!”
— Dan

★★★★★ “The book was full of action. It was hard to put down. Now that I am done, I want to start the next book. Excellent job Bill. Watching and waiting for the next one. I know you have a proud mom in Heaven.”
— Vickie

What Inspired You to Write Your Book?
A promise to my mother on her death bed.

How Did You Come up With Your Characters?
I model the main character out of my past, except made him better, tougher. I am ex-Marine, took years of karate, have a sense of humor, and work in the information technology field.

His counterpart is a mixture of evil villains I seen in movies and books.

Book Sample
Mike knelt and pretended to tie his shoe. He raised his head to regard the men. “One quick question before we go, what does ‘To strive, to seek, to find and not to yield.’ mean?” He gripped the handles of both knives.

The large one’s voice boomed. “I recognize him, that’s O’Connor. The fighter.”

The men drew their guns.

He growled. “Damn it, I said go!” The grip lifted, Mike kept his eyes on his opponents.

He rehearsed his next attack in his mind several times on the way over. With a smooth motion, he freed both knives. He threw them at once, center mass. His imagination was better than reality.

One knife stuck and dug into the larger man’s shoulder. His arm shook, and he dropped his gun.

Mike’s injured arm affected his throw. The other blade cut into the smaller man’s inner thigh and fell to the ground. The wound’s damage did not stop him from firing his weapon.

The sound is no louder than that of a pellet gun. A puff of smoke left the silencer. Shit!

Shot, Kim sunglasses were blown off her face, she crumpled to the ground.

The smaller man tucked his head, flung his gun to the ground and clasped both hands around his thigh to stem the blood flow. He fell to his knees and then to his side. A lot of blood soaked his pants.
Impaled, the larger man scowled, gripped the knife handle protruding from his shoulder, and pulled.

Kim laid next to Mike, her breath is labored.

Mike’s anger flared. Flames grew in an effort to consume him; he was losing control. Something happened, something strange. “I have to stop him. I need to be cool-headed. Chill.” Mike heard the words, understood clearly it was his voice, but did not recall saying anything.
He tempered his anger and found a calm, a cold calm to smothered the flames. He would eliminate this threat and take care of Kim. For the first time since his parents died, anger would not rule him.

The excitement of his decision caused adrenaline to rush through Mike’s body. He sensed a tingling in his spine, head, and heart. His chest contracted. A surge of energy flowed through his muscles. The battle was at hand.

Mike snatched his cane with his fighting hand, stood, and stormed forward with a purpose.

The large man taunted. “You think that little toothpick of yours is going to save you?”

When he got close, he swung his cane like a baseball bat at the larger man’s head.

The man blocked the cane with his massive arm and lunged forward with Mike’s knife.

Mike anticipated the attack and moved backward. He dodged at the last second to throw the man off-balance. The leather fabric of the aviator jacket split twelve inches when the blade sliced into it.
He latched the hook around his opponent’s wrist and yanked down.

Mike twisted the cane to break the grip on the knife. The knife clanked when it struck the ground.

His opponent stumbled forward. Mike aimed the butt of the cane at the man’s throat. The cane met resistance.

The larger man staggered. The man’s eyes bulged while his hands smothered his crushed Adam’s apple.

Stars flashed when Mike threw a sidekick to the man’s head. Pain shot through his lower back, but he remained on his feet.

The large man fell face-forward. He turned to the smaller man who laid on the concrete immobile. His hands squeezing his leg. Blood pooled. Mike dismissed him as a threat.

He twisted in Kim’s direction, but a body slammed into him, dragging him to his knees. Muscular arms tighten, a human hangman noose across his throat.

I need air. Mike sucked in a breath, but his relief proved short-lived. Shit, a combat judo choke hold. I didn’t tuck my chin. This one has to be from the damn tunnel.

Air and blood slowed to his brain. Mike strained to wrench the assailant’s fingers to break the hold. His last chance at life, but failed. I’m dead.

The human noose spoke. “As your life slowly ebbs away, you’ll see a bright light. Too bad you will miss the bright light we’ve arranged for your President on his big day.”

Mike’s eyelids weighed a ton; he did not have the strength to keep them open. They slowly slid shut. A bright light appeared in the distance. I failed Kim.

A loud bang accompanied the light. The chokehold’s death grip relaxed and fell away. Mike gasped for air. He sucked in another breath and forced his eyes open. His vision blurry, he blinked to clear his eyes.

The man laid next to him, flecks of bone and brain dotting his face, thin streaks of blood spiraling away from a hole in the man’s head.