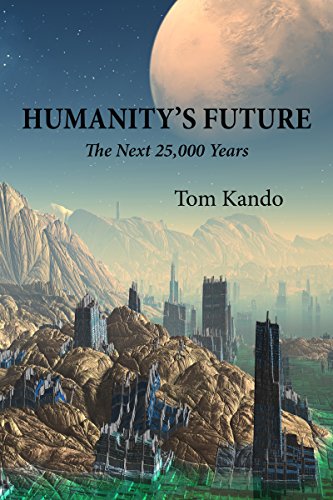 The book describes our species’ conquest of the solar system, interplanetary wars, scientific and cultural progress, and our evolution towards a more perfect society. Gradually, there is world unification and expansion into space. Our federated Earth – Gaia – expands into the Solar System – Solaria. There are many ups and downs, but eventually war between nations becomes something of the past and humankind relies increasingly on true science. The narrative culminates in a apotheosis when, in the late 25th millennium, Solaria begins to expand into the galaxy in order to humanize it. Because of Solaria/humanity, the universe becomes self-aware.

What Inspired You to Write Your Book?
This latest book was my first experiment in Science Fiction. It was inspired by Arthur C Clarke’s 2001, George Orwell’s 1984 and H. G. Wells’ “History of the World” as well as his “Time Machine.” I had always wanted to apply my sociological skills (that’s what I taught for more than 40 years) to a holistic prognostication of humanity’s distant future – as Wells did. However, unlike Orwell and Wells (but LIKE Star Trek), I am optimistic in the long run. I am an admirer of the philosopher Karl Popper. I agree with him that science and knowledge are infinitely expandable, and although humans are currently making some very dumb decisions, I am betting on the power and the triumph of the human brain in the long run.

How Did You Come up With Your Characters?
The first version of my manuscript hardly had any characters. It was a general “alternative history” book. Then, some reviewers and editors told me that characters would enliven the story. So I developed a multitude of characters. I made sure that they were “dynasties” of important historical figures – politicians, scientists, generals, astronauts, etc. These major figures – some good, some evil – are each other’s descendants and ancestors, separated by centuries.

Buy Humanity’s Future: The Next 25,000 Years by Tom Kando On Amazon