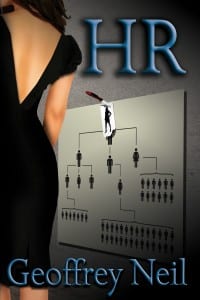 Some things are worse than getting fired. Beautiful business consultant, Morana Mahker, swoops in to rescue Innovative Menu Covers, Inc. from certain financial disaster. She cancels layoffs and dazzles everyone with her killer looks and corporate savvy—everyone except Lonnie Raiford.
Having worked years to establish a host of questionable perks for himself, Lonnie has no interest in having Morana tamper with his system. His concern is eclipsed when he and the other staff soon notice the over-the-top attention and affection Morana showers on Hugh Berish, Lonnie’s coworker and best friend.
As curiosity mounts about Morana’s true identity and intentions for Hugh, Lonnie embarks on a frantic investigation that uncovers plans more terrifying than anyone had imagined. In a true test of friendship, Lonnie resorts to extreme measures in a desperate attempt to save Hugh and any future victims from Morana’s horrific goal.

Geoffrey Neil writes noir fiction laced with a social conscience. He graduated from Cal State San Bernardino with a B.A. in Communication and then spent years in an outside-sales-induced haze of professional confusion. Life’s predictable challenges drove him to the keyboard where torrid personal-journal entries, pounded out late at night, led to a therapeutic obsession with writing.
His first writing gig was a weekly column called “Technology Triumphs” for a Los Angeles community newspaper. In 2009 he completed his first novel, Dire Means. His second novel, Human Resources, published on November 1, 2012. He’s now drafting his third novel, Wanton Disregard.
During the day he runs Mollifiers, an IT consulting company in Beverly Hills, California that goes by the slogan, “Technology Anger Management”. See more about Geoffrey and a list of his current projects at geoffreyneil.com.