You are here: Home / Non-fiction / Personal Growth / How To Be A Man: The Dynamics of Manhood by Alec Sommers 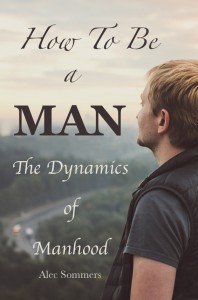 Upon reading this book, the youth of the world will gain the knowledge needed to come forward upon the stage of life, as models of excellence, with character properly formed to face any encounter in life, as a well respected Men. My hope is to pass on the knowledge needed to anyone who may be in need of moral guidance so that they may make real contributions to the good of mankind; to be the pillars of society and become our future leaders, legislators, governors, judges, ministers, police officers, lawyers, physicians and future fathers to our youth.

I truly hope you will give candid hearing to the advice contained in the following pages. You will find direction on exactly “How to be a Man”, as well as candid examples of how to not be a man. The advice given can be used by anyone seeking knowledge.

It is my desire that every person who reads this book will learn the true value of manhood and strive to be a man in the highest sense of the term.

What Inspired You to Write Your Book?
Too many boys and men are growing up in today’s society without any real guidance on what it really means to be a MAN. A man that takes responsibility for himself and lives by an unbreakable moral code. This book will hopefully provide guidance to anyone who wants to lead a life as a real man.

Book Sample
I HAVE seen boys who would make incredible exertion to accomplish any thing which they undertook for their own amusement; but who, when called upon to do any thing useful, would demur and complain, put on sour looks, and conjure up a multitude of objections, making the thing to be done like lifting a mountain. Whenever any work is to be done, “there is a lion in the way; ” and the objections they make, and the difficulties they interpose, make you feel as if you would rather do it a dozen times yourself, than to ask them to lift a little finger. The real difficulty is in the boy’s own mind. He has no idea of being useful; no thought of doing any thing but to seek his own pleasure; and he is mean enough to look on and see his father and mother toil and wear themselves out to bring him up in idleness. Play, play, play, from morning till night, is all his ambition. Now, I do not object to his playing; but what I would find fault with is that he should wish to play all the time. I would not have him work all the time, for “All work and no play makes Jack a dull boy;” neither would I have him play all the time, for “All play and no work makes Jack a mere toy.” There is not a spark of manliness in such a boy; and he never will be a man, till he alters his notions.
——
NEVER SUFFER YOURSELF TO BECOME THE SLAVE OF ANY HABIT.
Abstain entirely from intoxicating drinks, tobacco, gaming, and profane language. For when you once begin, with any of these, it is like “the letting out of waters.” At first they run very slowly; but soon they wear away a channel, and rush on with an impetuosity, which defies all attempts to stop them. On the coast of Norway, there is a great whirlpool, called the Maelstrom, which sometimes swallows up great ships. When a vessel comes near this terrible abyss, it is first drawn very gently, with a circular motion. But after it has made one or two rounds, it goes more and more rapidly, and draws nearer and nearer the centre, till finally it reaches the vortex, is swallowed up, and is seen no more. So it is with these bad habits. When one gets fairly within the circle of their influence, his fate’s well nigh sealed. The only safety, with young men and boys, is to keep far away from the very outer edges of the whirlpool.

Links to Purchase Print Books
Buy How To Be A Man: The Dynamics of Manhood Print Edition at Amazon

Buy How To Be A Man: The Dynamics of Manhood On Amazon