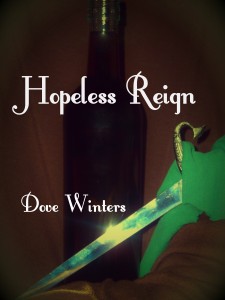 Ginny doesn’t want to be queen. Known as the mead-loving, trouble-making princess of Newrock, all she wants is for her beloved little brother to marry, so he can assume the throne and she can disappear. But when tragedy befalls her kingdom and pushes the crown into her hands, she’s forced to face her worst nightmare. Surrounded by betrayal and the threat of death, her only thought is to save her brother–even if it means giving herself over to the enemy.

What Inspired You to Write Your Book?
I had for a long time been wanting to write a story about kings and queens and knights, and I wanted to write about strong princesses and brave women, not damsels in distress. It took me awhile to fully develop the story for Hopeless Reign, but I like how it turned out!

How Did You Come up With Your Characters?
At first, Ginny was just a rebellious teen princess. She is actually the one that came up with the idea to have a mead problem, and I agreed, because I think it made her more vulnerable. Ward, her best friend, is a boy, and I thought that added an interesting touch. Her best friend isn’t another girl, and the name “Ward” reflects that he looks out for her, even when they’re up to no good. I wanted Liam to seem like a stereotypical prince, really good looking and full of himself, but underneath, he’s really sweet and he cares deeply for his kingdom.