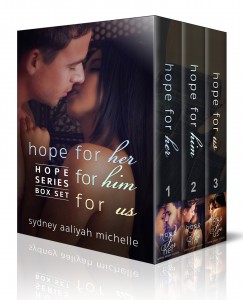 Hope for Her – Book #1
What do you HOPE for?
Josh is on his last chance to live up to his families obligations, but he meets a girl that his father won’t approve.
Carrington wants to feel special and Josh’s attention is exactly what she craves.
Their volatile relationship has Josh questioning their connection while Carrington develops feeling for someone else, but they aren’t ready to give up hope.
What happened towards the end, I wasn’t expecting. As I read, I was feeling all kinds of emotions …” Paranormal Yours Book Club R&R

Hope for Him – Book #2
What do you HOPE for now?
Carrington is ready to be with the man of her dreams.
Jackson has moved on in need of a more normal life.
After an epic kiss, they know their life will never be normal again.
Can Carrington and Jackson find their way back to each other or will their past continue to tear them apart?
“I want more!!! It just keeps getting better and better!” Heather Driscoll

Hope for Us – Book #3
What do you HOPE for still?
Carrington’s past haunts her around every corner. A move to Arizona will give her much needed distance.
Jackson is one mediocre season away from being a bust in the NFL. A trade to Arizona with no distractions is what he needs to turn his career around.
Carrington and Jackson are back tougher again.
Are they ready to admit, they have no hope without each other?
“Their story came together beautifully and they finally got their HEA.” Barb Online Book Club

What Inspired You to Write Your Book?
I was inspired to write the Hope series based on my own experiences in college. I attended Florida State University and was . . . surprised by the division in the school between the races and classes. Old money, Florida families exhibit chacteristics of old world English Royalty were the oldest son is the revered despite his problems and mistakes. I enjoyed exploying how the dynamics interracted.

How Did You Come up With Your Characters?
The main Carrington Butler is based on a few people I went to school with.
Josh Griffin is based on a friend of mine who had a difficult time adjusting to the perceived demands of being the eldest son and taking over his father’s business.
Jackson Mitchell is my all around good guy, sports jock, alpha male with a heart. He is my ideal man.