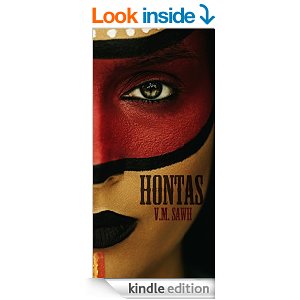 In this rip-roaring Wild West adventure, intrepid bounty hunters Pocahontas and John embark on a dangerous mission to stop a train run by a sadistic, slave-driving madman.

Welcome to Good Tales For Bad Dreams, a short-fiction series of re-imagined fairy tales. Each story is set in a different time and place. Some will be familiar, others will not. This tale shifts the story of Pocahontas from Colonial Times to the Wild West. So, strip bare your assumptions, open your mind and see these tales told like never before.

What Inspired You to Write Your Book?
I wanted to tell a non-traditional version of the Pocahontas story, from the point of view of the main character, in a time when she would be considered a 2nd class citizen. Plus, the idea of a Wild West bounty hunting Pocahontas just seemed too irresistible to pass up!

How Did You Come up With Your Characters?
My characters are all crafted around their respective themes. For example, in book 2 of this loosely-connected series, Hontas represents a theme of identity, of finding oneself. This had a particular bearing on me, personally, as I often struggled with my own sense of self vs. what other people expected me to be based on my skin colour, culture, gender etc.

Book Sample
***
“How many?” John was panting. His adrenaline kicked in at the sound of the shot.
“One.”
“There’ll be more. That car’ll empty out quick.”
That was bad. They’d be outnumbered by at least a dozen.
“Did you do it?”
John shifted, scouting the opposite side of the train with a glance. “Not enough,” he pulled his own silver Colt and unslung his rifle. “This is more than a six bullet situation.”
***

About the Author:
V.M. Sawh was born in South America and grew up in Toronto, Canada. He’s had pen and paper in his hand since he was 6 years old and his first trilogy of novels was completed at age 16. Despite the urgings of his Writer’s Craft professor, he didn’t publish at the time. He’s spent the years between then and now honing his craft and engaging in all manner of geeky pursuits including assembling a ridiculous collection of graphic novels, anime and movies.
In a fit of ill-advised ambition, he recently built his own computer which took him a year to assemble because as one computer expert put it: “You got the parts from Ferrari, Lamborghini & Boeing and then tried to make them talk to one another.” Several explosions and bouts of linguistic extravagance (that would make sailors blush) later he’d assembled a behemoth that still kicks all kinds of ass.
It is on said behemoth that he currently writes his newest collection of tales. He often fears that if he doesn’t write, the characters in his head will sing Barbara Streisand songs to him non-stop until their stories are told.