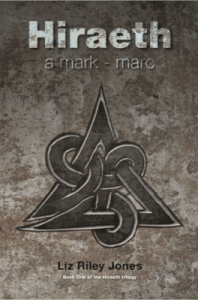 Mona Jones has been on the run all her life without knowing why. Her parents were murdered and now, at twenty one, her uncle and protector is dead too. This chain of events compels her to spend time amid a Welsh-speaking community in Ynys Môn (Anglesey, North Wales). Here her druidic ancestry begins to emerge, though it is spotted more quickly by those around her. She is branded by an enemy Druid and finds herself at the centre of a druidic civil war.

“The Mark” unleashes her power, but she also has a terrible weakness. Mona finds herself drawn to the warrior Cai, but they are separated when the community is attacked. The Welsh druids are convinced there is a spy in their midst and both Mona and Cai become suspects. When Mona is assaulted, her uncontrolled power explodes for a second time. The Druids must decide if she is their saviour or their destroyer.

What Inspired You to Write Your Book?
The first book in the Hiraeth Trilogy, “Hiraeth a mark – marc” is inspired by big Celtic themes: the Mabinogion, music, Welsh and Irish mythology and texts. The list is long and fairly comprehensive, but the overriding theme is the Welsh language. The initial inspiration is my 10 year battle with the language but it has morphed into some sort of an homage to it.

How Did You Come up With Your Characters?
Welsh and Irish mythological texts, family.

Book Sample
Twenty years of hiding, of running, and it had come to this. Tom pulled her along behind him, willing her to keep up, but she staggered again. She’d run too far, for too long, and Molly knew she would die tonight.
They called these ancient woods by their first name, Blaen – their Welsh name. Molly had brought Tom here this morning to celebrate Beltane and to consecrate their love, but she should have been more careful. Never the same place twice was the rule, but she’d broken it. It was too late now, and Molly could hear the men gaining on them; crashing through the undergrowth in the wet dawn.
Tom could feel her waning, and slowed to a jog. “We’ll make our stand here – after all there’s only five of them left now.” He reached for a smile but the expression on his wife’s face extinguished the attempt. “Where’s Brendan?” It was almost a curse beneath his breath. Tom scanned the blanket of moist green, short sword in hand. They were back to back when the first Irishman broke cover.
“Not bad for a couple of oldies,” the youngster taunted, trying to control his breathing. “He told us you might be a handful.” The tone changed as he gazed at Molly. “He wants you to pay for your mistake.” Molly gagged at a memory and Tom tightened his body around her, as two more men entered the clearing. This Irishman was extremely young, not much more than a teenager, and his strong Wicklow accent jolted Tom back twenty-five years. “Nothing you can do now.” The lad grinned, holding up a blackened blade. “The swords are tainted. It’ll only take a nick.”
Tom threw his own sword in a vicious deadly arc, the momentum of the steel sending the boy flying backwards and clutching at his ruined throat. “Now there’s only four. Do you want to talk?” he spoke evenly, to one of the stunned accomplices.
“You fucking Welsh bastard,” another lad screeched, the youngest by far, and Tom felt that malice again. “There’s nothing to talk about. You’ll die and he’ll have her, at last.”
Molly passed Tom her sword, eased a knife from her belt, and threw it into the nearest man’s thigh; she knew it would have bounced from the combat leather on his chest. The boy swore in pain as he dug out the dagger, then advanced on her, tainted blade in hand – all piggy pink eyes and ginger hair.
Tom pushed Molly behind him, and then regained his combat stance. The younger man wasn’t well trained but he didn’t need to be with that blade. He wielded it like a taunt, slashing up and down flashily but leaving his kidneys exposed. Tom feinted to the side leaving his opponent overextended and off balance; a brutal kick to the ribs knocked the runt flat. Too late. Tom whirled to Molly, held in the arms of the third man, and all the air emptied from his lungs. “No! Molly.”

About the Author:
Liz Riley Jones wrote this trilogy in her car. It seemed a useful way of filling the time whilst waiting for her son in various rugby training grounds up and down the country.
Initially inspired by her own roots, Liz has always been interested in her Celtic roots, female empowerment, and druidism. She became fascinated by the mythology, identity, history and language of the Celtic nations and the story developed from there.
Liz lives with her family on a barge in Kent with two Welsh speaking whippets.