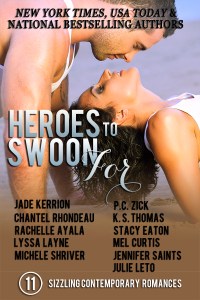 We all need a hero! Preferably a hot, muscled, romantic one who’s not afraid to fight for the woman he loves. From firefighters to athletes, and artists to rockers, these swoon-worthy heroes will keep you on your toes and weak in your knees. Slip into a reading adventure that will have you panting for more: fun, steam, and thrills.

Aroused – Jade Kerrion
Recently divorced, Dr. Vera Rios is too busy being a single parent to look for love. Along comes a man who cherishes her, adores her daughter, and helps her find her sexy groove. The only problem: He’s an escort, with far too many secrets. Will love cost Vera her daughter’s safety?

Blazing Love – Chantel Rhondeau
Laura’s attempting to rebuild her life after grieving for her murdered fiancé. Fireman Thayne is the most eligible bachelor in Sayle—strong, loyal, and sexy as hell. He’s determined to show Laura how to love again, but an arsonist ups the stakes, risking more than their romance.

Roaring Hot! –Rachelle Ayala
Motorcycle racer Teo Alexiou cooks up a reality show to convince actress Amy Suzuki to play at being his girlfriend. But chemistry ignites and explodes their carefully scripted act. When Teo is injured on the track, he is left wondering if the reality show portrayed skillful acting or true love.

The Right Pitch – Lyssa Layne
Colie Adger is a rookie athletic trainer and best friends with Grant Adamson, a veteran pitcher. Colie’s elated when big time pitcher Jace Richards, her former crush, comes back into her life. Will Grant step back while Colie figures out which man has the right pitch?

The Art of Love- Michele Shriver
After watching her parents’ marriage crumble, jewelry artist Chelsea Matthews doesn’t believe in love. Painter Hayden Shaw sets out to show Chelsea the art of love and that good guys do exist, but a gallery curator with an agenda of her own threatens their happiness and future dreams.

Behind the Altar – P.C. Zick
All seems perfect in Leah’s life until tattoo artist Dean rides his Harley into her heart. Dean is drawn to Leah’s natural beauty and genuine goodness, but Leah’s engagement to Dean’s brother stands in the way. The more they fight the attraction, the harder it is to stay apart.

Lost Avalon – K.S. Thomas
Rockstar Blaise has it all with his brooding good looks, haunting voice and troubled lyrics of a soul gone lost. Only Blaise didn’t wind up brooding, haunted and lost by accident…
Avalon has been the girl next door, the band manager, and the keeper of his secrets always. But Blaise has one secret even Ava doesn’t know.

Second Shield – Stacy Eaton
When Agent Drew Bradley goes undercover to find an officer gone rogue, he finds Detective Sergeant Mackenzie McAllister. Mack is the epitome of control, but not around the young, sexy rookie. Can Drew solve the case before Mack loses her cool?

Amber Rules – Melinda Curtis
Life coach Amber Rules is assigned is to improve the game of Evan Oliver, one of the biggest bad-asses in the NBA. Too bad Amber knows nothing about basketball. Too bad Even Oliver is determined to do things his own way, especially when it comes to teaching Amber a new set of rules.

Wild Irish Ride – Jennifer Saints
Given a second chance at forbidden love, Alexi plunges headlong into the passion Jesse ignites. To Jesse, love is an overrated word for getting ones needs met, and he’ll gladly take Alexi on the ride of her life. Maybe then, he can get her out of his head. But the forces are at work again and, this time, may cost them their lives.

Bonus Story: How You Remind Me – Julie Leto
Sexy guitarist Shaw Tyler knows lawyer Kate Schaffer’s personal fantasies. After a scary black-out, Kate cleaned up her act and remembers nothing. Who is the man who acts like he knows exactly what she wants, and is she willing to find out?

What Inspired You to Write Your Book?
This box set was inspired by a group, Romance in a Month. Many of us participated and then started talking about our hunky heroes. Several of the authors in this set are also involved in other romance box sets, so we decided to put ours together into one neat package filled with Heroes to Swoon For.

How Did You Come up With Your Characters?
Many of our characters and their personalities emerged during daily writing prompts during our Romance in a Month online class. Prompts were given asking us very personal questions about our heroes and heroines, and some very interesting sexy men grew into our swoony heroes.

Amy stretched and cracked her eyes open. It was still dark, very early, but the side of the feather bed Teo had slept on was rumpled and empty.
A sliver of light shone under the bedroom door. She tiptoed to it and opened it, peering into the living area.
Teo knelt on a cushion with his feet tucked underneath him. His spine was straight and he was shirtless, wearing only a pair of white karate pants. His eyes were closed, and he held himself perfectly still.
His breathing was steady, and his well-proportioned body was relaxed. The planes of his chest were smooth and mostly hairless except for the faint trail of dark hair between his abdominals leading down to his crotch.
His image flickering in the candlelight was hypnotizing and strangely sexy. Not that she’d ever thought watching a guy meditate was a turn on. Usually they looked weird, cross-legged, with their fingers in circles intoning nonsense phrases. But Teo kneeling on a pillow, his back ramrod straight was different, like a Japanese warrior, a samurai, ready to spring with coiled energy at a moment’s notice.
His eyes opened and rested on her. A smile crept on his face. “I’m glad you’re awake. We have to get back to the racetrack before the pre-race meeting.”
“You’re not in trouble, are you?” She sidled up to him and knelt.
“No trouble.” He tangled his fingers in her hair, ruffling it. “Did you sleep well?”
“I did. Very well.” She kissed him. It was so natural and so easy. This beautiful man who was always concerned about her. “Someday, will you teach me to meditate?”
His eyes were calm, full of inner peace as he drew away from her lips. “It will be my privilege.”

About the Author:
Jade Kerrion writes award-winning and occasionally best-selling science fiction, fantasy, and contemporary novels anchored on unlikely romances you will root for and happy endings you can believe in. Her favorite romance is the Double Helix love triangle between Galahad—the lab-created perfect human being; Danyael—an alpha empath and Galahad’s physical template; and Zara—the woman who can wreak more havoc with love than most people can with hate

Chantel Rhondeau is hooked on romance and suspense. She thinks there’s nothing better than a great mystery, but basically an optimist, Chantel loves a book to end ‘happily ever after.’ When she isn’t writing, Chantel enjoys playing cards with her family, bowling, and snuggling with her four kitty ‘children.’

Rachelle Ayala is a bestselling Asian American author of dramatic romantic suspense and humorous, sexy contemporary romances. Her heroines are feisty and her heroes hot. She writes emotionally challenging stories but believes in the power of love and hope. She has won awards in multicultural and historical romance.

Lyssa Layne is a blogger turned author after being inspired by Rachelle Ayala. She enjoys hot romances and loves to shock her readers right until the final page. Lyssa enjoys chasing after her two year-old-daughter, being a tourist in her own city, and anything involving peanut butter.

Michele Shriver writes women’s fiction and contemporary romance. Her books feature flawed-but-likeable characters in real-life settings. She’s not afraid to break the rules, but never stops believing in happily ever after. Michele counts among her favorite things a good glass of wine, a hockey game, and a sweet and sexy book boyfriend, not necessarily in that order.

P.C. Zick began her writing career in 1998 as a journalist. She’s won various awards for her essays, columns, editorials, articles, and fiction. Today, she writes romance and contemporary literature with her pen drawing plots filled with love, hope, and forgiveness.

K.S. Thomas is a mother by day, an author by night and a twenty-four/seven coffee addict. Although she hasn’t yet (and may never) decided on one preferred genre, there are three things you can always expect to find in her novels – humor (via plenty of wit and sarcasm) – drama (because that’s life) and, always – ALWAYS – a happily ever after (even when it’s not in the most expected ways).

Stacy Eaton is an International Best Selling Amazon author of eight books and a full-time detective who has a passion for putting the pieces together while investigating the crime. She is also a wife, mother, business owner and on the board of directors for her local domestic violence center. When she’s not ‘working’, she’s ‘writing’. Stacy loves chilling with her family and photography.

Jennifer Saints writes romance because she believes that when you take a human being to the very core of his existence, then you will find that what matters more than anything else is to be loved and to give love. She is an award winning USA Today Bestselling author and writes in a number of genres. She also works with several charities to raise money for abused and homeless women.

Julie Leto
New York Times and USA Today bestselling author Julie Leto has sold over forty-five books to four publishers–all featuring strong, confident women and the super-sexy men they drive to their knees. To date, she has over 1 million books in print across the world.