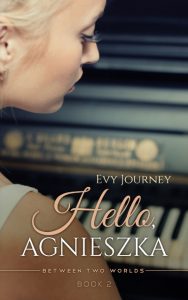 Elise thought she knew her mother, Agnieszka. But when her oldest brother attempts suicide, dark secrets are about to be revealed.

Young Agnieszka discovers a passion for music, and her grandaunt Jola, a former concert pianist, hones her talent and feeds her dreams. But too poor to continue her training, her dreams of being like Jola are shattered. And her thorny relationship with her mother worsens.

Agnieszka meets Lenny Weisz and they fall in love, renewing her hopes for happiness. But forces beyond their control end their love.

Her family—weighed down by its roots—casts her aside. Can music and memories help Agnieszka make a life for herself all alone? How does she rise from the losses she has suffered and get a second chance at happiness?

Hello Agnieszka, Book 2 of the saga, Between Two Worlds, is a 70s tale of love, betrayal, and the healing power of music.

What Inspired You to Write Your Book?
Hello Agnieszka is both a sequel and prequel to Hello, My Love, which I first wrote with no intention of doing a series. But something about the mother in the first book intrigued me and I kept imagining things about her. So, I thought I’d write this one.

How Did You Come up With Your Characters?
Since this is the second book in a series, the heroine has already been fleshed out quite a bit in my mind. I merely had to give her a history. At this point, I had decided to do a series about negotiating separate cultural realities so I made Agnieszka the daughter of Polish immigrants having trouble adjusting to American customs.

Book Sample
Elise Halverson-Thorpe sat, perusing a client’s testimony at her desk in mid-afternoon, green highlighter in hand. She still had a half-inch thick of testimony transcripts to go through before she could stop for the day. She might have to bring some work home again.
She lifted the highlighter to mark a phrase in the transcript, but the cellphone in her shirt pocket vibrated and interrupted her movement for an instant. She groped for the phone while she dragged the clear green ink across the phrase.
She knew it couldn’t be Greg, who usually called sometime around noon. Before she swiped it, she glanced at the screen and, surprised to see her father’s face, she muttered to herself, “Dad.”
He rarely called her at work, aware that she might be arguing a case at court or taking testimony or deposition from a witness. What could he want from her at two in the afternoon?
“Dad. What’s up?”
“We’re at the hospital, but don’t be alarmed. Everything’s okay now. It’s Peter.”
Her father’s voice was low and calm, but she detected an edge to it. He was struggling to sound normal and in control.
“Peter?”
She put the green highlighter down, next to a red one, and closed the two-inch thick transcriptions of testimony taken from the woman she was currently defending on a murder charge. Her third such case in as many years of working with the Public Defender.
She leaned against the back of her chair and gripped the telephone tighter. Her father was taking a while to answer, and she grew apprehensive with every second he remained silent.
“Yes. He swallowed a bottle of pills. Mom found him unconscious in the tub. But he’s okay now.”
“What? What are you saying? He tried to … kill himself? Peter?”
“Yes.”
She gasped in disbelief at that one-word answer, and her mind went blank for some seconds at the weight of it. She began to breathe a little faster as she struggled against what it meant until she could no longer resist the full force of it. A tangle of thoughts and emotions closed in on her: No, not possible. Not you, Peter. No. I don’t understand. Why? What’s going on with you? Why choose death over life? No! How could you? How could anyone?
“Elise, are you all right? Are you still there?” Her father’s anxious voice broke through her turmoil.