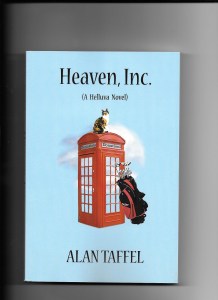 When Marvin Miller dies, he finds Heaven different than he imagined: there are no Pearly Gates, no puffy clouds, and certainly no winged angels playing harps. In fact, Marvin discovers Heaven is run like a business and that he is expected to contribute to the Heavenly community by holding a job that puts him in direct contact with the Devil, a roguish, rebellious golf fanatic.

As part of Heaven’s Management Team, Marvin encourages residents to donate parts of their souls in order to create new life on Earth. However, when he falls for Bree, a rebellious activist who suspects the donations are not entirely voluntary, Marvin must confront Good versus Evil in the Heavenly realm as well as manage a Heavenly crisis of epic proportions.

Between Marvin, Bree, the Devil, and a wondrous cat named Zoey, Heaven will never be the same.

What Inspired You to Write Your Book?
My father’s death prompted me thinking about our mortality as humans. If we die, are buried, and just turn to dust…well, not much of a book there. I also didn’t quite buy into the standard stories we’ve all heard about Heaven, Hell, etc. So I came up with a series of “what ifs.”
What if Heaven isn’t what we expect?
What if Hell isn’t terrifying…merely boring.
What if the Devil wasn’t such a bad guy after all?
What if God wasn’t a micromanager?
Add my twisted sense of things and you have “Heaven, Inc – A Helluva Novel”…for those who like some humor with their mysteries.

How Did You Come up With Your Characters?
Many of the characters are based on people (and animals) I actually have known.
And I do have a VERY active imagination.

Book Sample
Marvin Miller was so distracted he never noticed the marble bathtub, complete with aqua-jets, that fell four stories and killed him. In the previous thirty seconds exactly forty-four people walked safely around the work area. They noticed the orange safety cones. They survived. Marvin didn’t.
He had rushed out of the office to grab a quick bite to eat. An artist’s rep for an agency representing creative types, Beecham and Howe, Marvin had a meeting scheduled with a former graffiti artist turned painter whose real name was Arthur Ginsburg but now went under the tag Launch 3,2,1. Ginsburg had been arrested for spraying a mural in a subway station and, while in jail, took up painting. Now he was acquiring some buzz in the galleries. And he was crazy. But, then again, all of Marvin’s clients were nuts. Sometimes he wished he represented writers, or photographers, or actors, or musicians. But they were probably just as bad.
The meeting was to take place in Mr Beecham’s office where they would go over the details of Ginsburg/Launch’s new contract. Marvin certainly couldn’t be late and all he had time to do was grab a quick slice of pizza at Pepperoni Boys. It was just down the block from the office.
He left the pizzeria distracted by thoughts of clauses, percentages, and royalties. That would explain his not noticing the orange cones out on the sidewalk. He heard someone yell “watch out” and looked around. Then he looked up.
“Nice tub,” he thought. It was his last thought on Earth as an actual living person. One minute Marvin was walking out the door at Pepperoni Boys and the next he was…here.
Marvin thought he should try to take stock of the situation. Directly in front of him was a door with a glass panel. Stenciled words on the glass door looked like a foreign language. He looked to the side and noticed a woman sitting behind a desk typing away frantically on what looked like a computer. A little oaken sign read “Sylvia.”
“Hello, Marvin,” she said when she looked up and noticed him staring.
“Hello, Sylvia,” he replied.
She was a rather large woman with a bouffant hair style that was dyed a shade of red that Marvin had never seen before. She wore cat’s eye glasses and peered over them to look at Marvin, who still felt a little woozy after being killed and all. His stomach growled, never having had the chance to get in even one bite of his slice of bacon extra cheese. He looked back at the door and tried once again to make sense out of the strange language painted on the glass.
The phone rang.
“Human Resources,” said Sylvia, answering the call. That explained the sign on the door. She scribbled notes quickly on a pink memo pad. “Yes sir. Yes, absolutely sir. I’ll make sure he gets it as soon as possible.” Sylvia hung up the phone and went back to her frantic typing.
“Sylvia?”
She sighed heavily as she stopped banging the keyboard. “Yes, Marvin?”
“Where am I? I have a two o’clock meeting…”
“You’re at Human Resources. Didn’t you read the sign on the door?”
Marvin looked back over at the door, still dazed.
“I was just…” Marvin paused to find the right word.
“Killed, Marvin. You were just killed.”
“Pardon?”
“Look, you seem like a nice kid and all. I hate to be the one to break it to you. Part of the job, you know? But you’re dead,” Sylvia said.

About the Author:
Alan Taffel is a TV writer/producer/director, the winner of an Emmy and multiple CableAce awards, a guitarist who will never play like Eric Clapton, and an avid golfer who has never hit a hole-in-one or shot a game under par. Alan lives with his wife Caryn in South Florida.