You are here: Home / Fiction / Heal The Sick, Raise The Dead 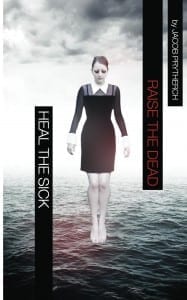 With the choice between the nightmare known and the nightmare unknown, it is the pull of the journey that drives Guy onwards, surrounded by a strange demonic family: Marcus the giant of aggression, Cato the hideous shrinking man and Perdita the silent child. Together they travel from their lonely island home into a land of rain and blood, where the last remnants of humanity desperately hold on to the spark of life against a growing flood of the undead. Along the way Guy’s ability with medicine begins to show itself, along with Marcus’ capacity for violence and Cato’s power of reasoning as they both aid and struggle with those they meet. When Perdita turns on them and begins to drive them to an unknown but hauntingly familiar destination it starts to become clear that the lens that Guy sees the world through is hideously skewed and they learn that the ability to forgive is a necessity for survival.

Jacob Prytherch was born in 1980, leaving the splendour of Derbyshire for the Midlands at the age of five. He started writing when he was seven due to a love of Tolkien and has been writing ever since, studying English at university and thoroughly enjoying every moment. He lives in Birmingham with his wife and two daughters. His work to date includes ‘The Binary Man’ (a dystopian science fiction novel), ‘Heal The Sick, Raise The Dead’ (a horror laced with mystery and the undead), and he is currently working on a series of episodic occult horror novellas titled ‘Cuts of Flesh’, the first of which ‘Shred’ is available now.