You are here: Home / Fiction / Fantasy / Hand of Miriam, A Bayla and the Golem Novel by Eva Gordon @evagordon 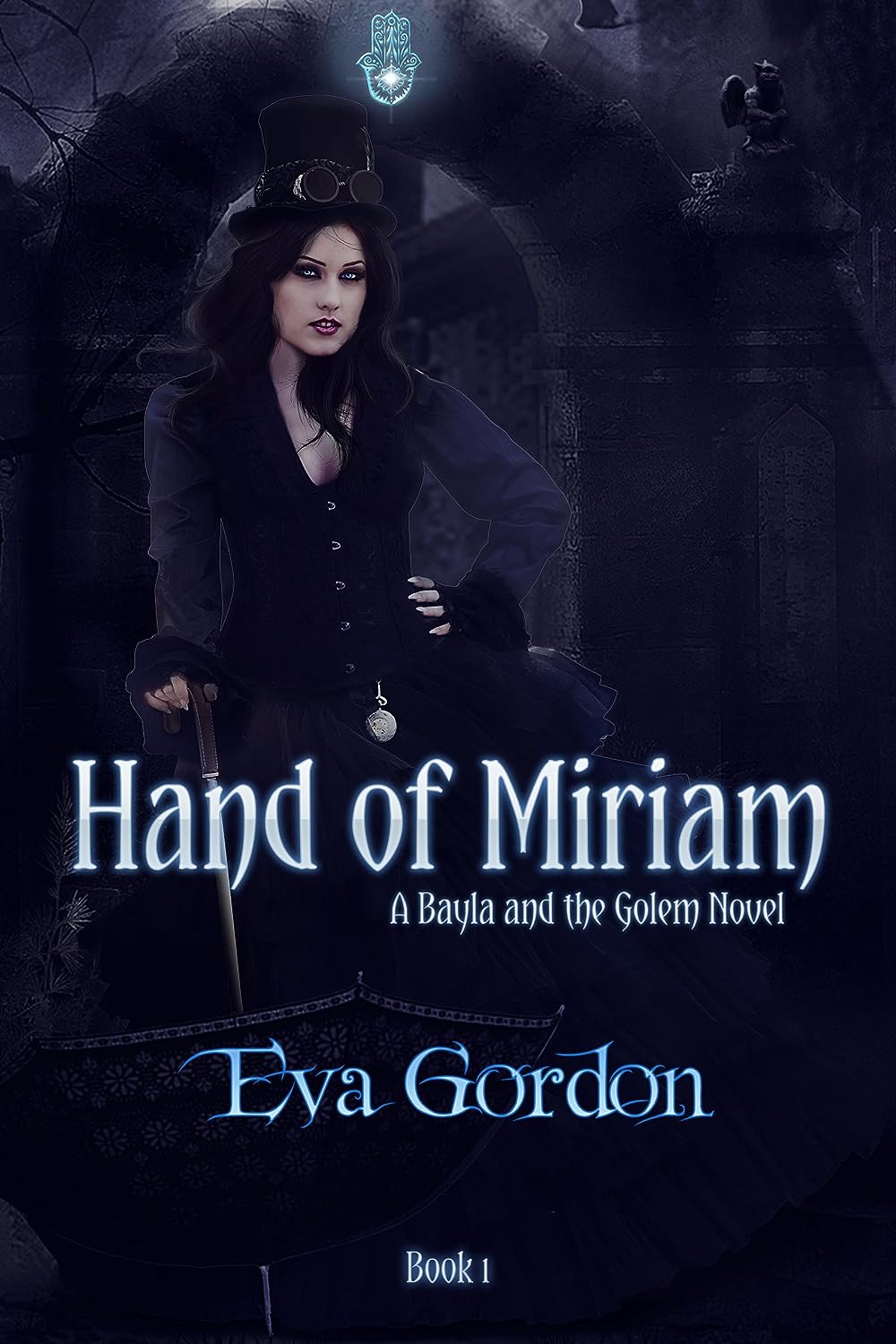 On an archaeological expedition, Bayla Gideon, is widowed by a supernatural force and branded with the Hand of Miriam or Knowing Eye. Threatened by evil, she awakens the golem; a mythical man of clay, who protected the Jewish community over three centuries ago.

The golem, Gesher, is surprised. Freedom –by a beautiful, enchanting woman. His desire is to return to the celestial spheres and regain his status as an avenging angel. Yet, Bayla challenges his mind, body and soul. Would he risk his return to the heavens for her?

Besides, dealing with the otherkind, mad inventors and an unrelenting matchmaking aunt, Bayla is equally determined to resist her steamy attraction to the striking fallen angel.

Thrust into a malevolent war, which includes facing Jack the Ripper, they must resist the magnetic pull toward each other, while protecting the world from encroaching evil.

What Inspired You to Write Your Book?
Readers familiar with my work know that I write paranormal romance of the werewolf variety, but little do they know that I’m often found in full neo Victorian style dress at your local steampunk convention. I love using my steam name, Sadie Winstone and presenting myself as Naturalist with the British Royal Science Academy. It was nice to create a story around my personal fantasy world. If you have not heard about steampunk, it is basically Victorian era science fiction/alternative history. Steampunk includes a wide spectrum with many subgenres. I mostly write paranormal romance and my heroes are normally alpha werewolves, so I found an absolute joy to don my corset and board my airship for the journey.

Naturally, my steampunk world has many paranormal romance elements, which include werewolves, vampires, demons, angels and a secret society known as the Grigori (the sons of Fallen Angels). My story then takes a different fork from the average paranormal romance, not because it takes place in an alternative late Victorian era England but because I also include Jewish elements.

How Did You Come up With Your Characters?
My main character, Bayla Gideon is a British Jew who discovers she has an ability to detect evil. She is the type of woman I would want to be, curious and adventurous. Faced with dangers, I team her up with the ultimate automaton protector, the Golem of Prague.

The golem character is based on the Jewish mythology that tells of a creature made of inanimate matter such as clay or mud. Golem myths date back to early Judaism and there are many versions of a golem story. I had fun setting up a golem story in a steampunk universe.

About the Author:
Eva Gordon writes genre bending paranormal/fantasy/steampunk and historical novels with a strong romantic element. She loves to create stories that combine her passion for mythology, steamy romance, and action/suspense. Her imagination takes her from one universe to the next. Thus far, she has several series lined up as well as single titles waiting in line for production.

Eva has a BS in Zoology and graduate studies in Biology. When not in her den writing, she can be found teaching animal lore at writing conventions, at work at the raptor rehabilitation center, wolf sanctuaries, or to satisfy her inner Hemingway on some global eco adventure.

Links to Purchase Print Books
Link to Buy Hand of Miriam, A Bayla and the Golem Novel by Eva Gordon Print Edition at Amazon