You are here: Home / Fiction / Science Fiction / Going Through the Change: A Menopausal Superhero Novel by Samantha Bryant 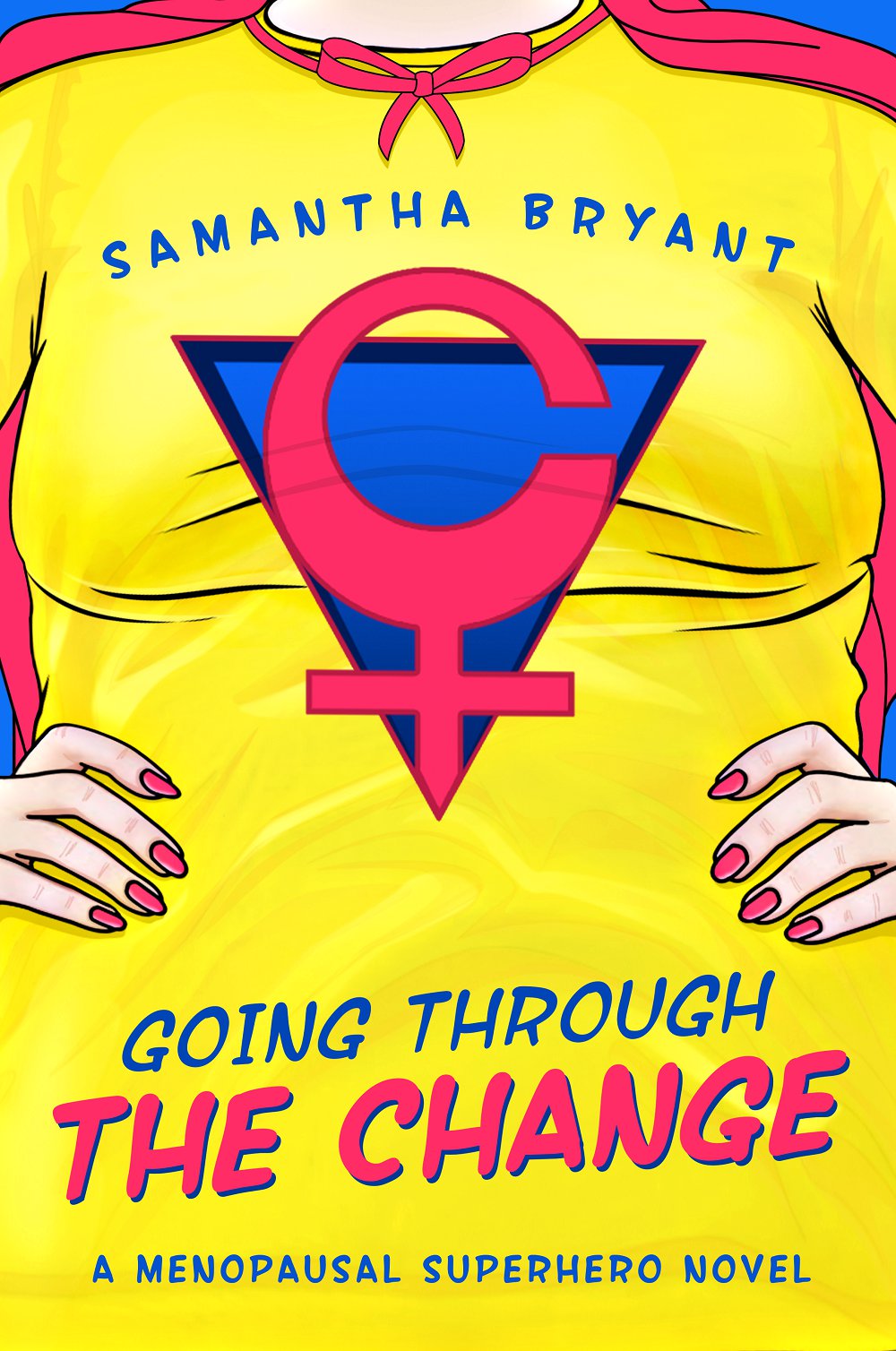 Going through “the change” isn’t easy on any woman. Mood swings, hot flashes, hormonal imbalances, and itchy skin are par for the course. But for these four seemingly unrelated women, menopause brought changes none of them had ever anticipated–super-heroic changes.

Helen discovers a spark within that reignites her fire. Jessica finds that her mood is lighter, and so is her body. Patricia always had a tough hide, but now even bullets bounce off her. Linda doesn’t have trouble opening the pickle jar anymore…now that she’s a man.

When events throw the women together, they find out that they have more in common than they knew–one person has touched all their lives. The hunt for answers is on.

What Inspired You to Write Your Book?
This book started with a conversation with my husband about the relationship between hormones and superpowers in comic books. I said that if hormones caused superpowers, menopausal women would be the most powerful people on the planet. He said I should write that down. And a book was born.

How Did You Come up With Your Characters?
Though the women grew and changed on me while I was writing, each just sort of sprang into my mind and revealed herself when I began writing.

Book Sample
CHAPTER ONE: Things Get Hairy for Linda

Linda was bundled in blankets, hiding on the couch in a cave made of fleece and wool and cotton when her husband came home. She had cried the afternoon away.
“Qué pasa, mi amor?” David asked, sitting beside her and resting one hand on her arm, probably trying to guess where her shoulder was. His voice was soft and gentle, his tone kind. He was so patient.
But there were limits, she knew. How could she even begin to tell him what was wrong?
Linda pulled away when he moved to tug the blankets away from her face. “No!” she said, grimacing at the way her voice sounded. It was like she had swallowed a ball of cotton.
“Are you sick?”
“No, no, it’s the cambio de vida, the menopause.”
David tugged on the blanket hood Linda had constructed and peered inside to find her face, but she kept it shadowed. His large brown eyes were full of worry, but he didn’t ask any more, just sat patting her arm and waiting. Linda appreciated his silence. She rocked herself back and forth, letting silent tears fall down her cheeks and into her coverings.
After a few minutes passed with only the sound of Linda’s occasional hitching sobs, David stood and went into the bathroom. Linda nearly called out to him not to go in. She had not cleaned up the mess she had made. The shower curtain was torn from its hooks and hanging off kilter. All the sink bottles were still on the floor from when she had shoved them aside to get better access to the mirror. The mirror she had then broken in a sudden fit of rage, punching it just over the image of her own face. She’d been shocked at her own violence and even more shocked when her knuckles began to bleed. The first aid supplies were probably still spread across the sink and counter as well.
She was going to lose him. Her David. Her vida. This wasn’t just aging, a little sag, or another skin problem. It had been hard enough to talk to him about ordinary woman stuff. He was so old-fashioned. He thought of periods and childbirth and hormones as mysterious things just this side of magic. Things men were not meant to comprehend.
Linda had tugged him gently into this century in the thirty years of their marriage. When the children were school age, she took a part-time job at the school “to be there for our niñas.” When their daughters were old enough to date, she made him a part of the conversations about what good girls do and do not do. She had recently heard him echoing her comments about husbands and wives as partners to one of his coworkers. He had come so far! But this…
Her heart was breaking at the thought of David leaving when he found out she had become… whatever it was she had become. Was there a word for that? Una mariquita? A girl-man? She couldn’t help it. She sobbed aloud.
David came out of the bathroom and knelt in front of her, wordlessly holding out a washcloth still hot from the sink. He knew she found a hot cloth soothing when she was upset. She reached out a hand and took it from him, pulling it into the cave she had constructed from blankets.
She was nearly naked beneath. She couldn’t find any clothing that would fit her; her body had grown so huge. She was clad in a beach cover up that now only came to her hips and a pair of boxer shorts one of the girls had given David as a joke one Father’s Day. They were red with huge white hearts all over them.
When she continued to weep, David sat back down beside her and simply pulled her to him. She wrapped her arms around him, turning her face away from his so he couldn’t see her whiskers. He rubbed her back with the palm of his hand in a slow circle, cooing soothing sounds and loving words into her ear.
Twirling around, Linda suddenly grabbed David, pulled him to her, and kissed him. She knew it might be the last time she would ever get to. David murmured surprise, but soon was kissing her back. For just a moment, she felt normal, a wife loving her husband in their home and getting loved back.
Then she felt it—not a tingling, not exactly. More of a tension, but warm. Not a hot flash, more like a rush of warmth. And it was down there.
She pulled back from the kiss and threw herself to the other end of the couch, where she curled her body into a ball.
David reached for her, obviously confused. “Linda? Corazón?
Linda fumbled in the blankets to find the source of the warmth. What was going on? It was like a spring inside her had tightened. She gasped when she dared to put her hand into her pants—she knew exactly what this was. It was the thing that grew on her. The pinga. The manhood. And it was stiff.
Linda howled.
David jumped up and rushed to her side. “Linda? Please, cariño, tell me what’s wrong? Do I need to call an ambulance?”
“They can’t help me. No one can help me.” She sobbed without restraint.
David took an angrier tone. “Linda. Tell me what is wrong.”
Linda sat up on the couch and let the covering fall back. David’s eyes widened.
“Can you still love me, David? Can you still love me if,” Linda stood, revealing the extent of her change, “if I am a man?”
David hit the floor, passed out cold.

Buy Going Through the Change: A Menopausal Superhero Novel On Amazon