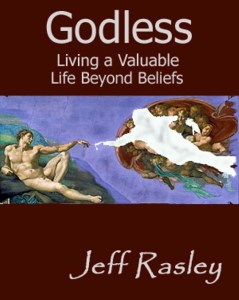 Beliefs divide us, Values unite us.

The contemporary history of religious and political ideologies is bloody. From the Nazi Holocaust to beheadings by Islamic Jihadist terrorists, fanatics have divided the world into believers and heretics. Their propaganda has persuaded followers to torture and slaughter unbelievers.

The cure for the pathology of fanatical beliefs: Fight Violence with Values!

Discard religious doctrines and political ideologies. Let shared values be the guides of personal and policy decisions. “Godless” illuminates a way forward into a more harmonious and peaceful future. It offers a remedy to revive religion and increase political participation. It advocates a pragmatic middle way to counter both fundamentalist extremism and secular apathy through communal activism.

Godless — Living a Valuable Life beyond Beliefs begins as a memoir reaching back into the author’s Puritan family history and the Salem witch trials. Rasley’s worldwide travels, spiritual quest, and intellectual journey took him far from his small town roots in the Presbyterian Church and Republican Party. Fascination with cultures very different from his Hoosier homeland developed during adventure travel breaks from studies in London and the University of Chicago. A successful law practice eventually allowed him the freedom to combine ethnographic research with mountaineering expeditions and philanthropy projects.

A special bond with the Rai people of Basa village developed during Rasley’s “philanthro-trekking” in the Nepal Himalayas. Indianapolis First Friends Quaker Meeting agreed to sponsor fundraising for a foundation Rasley developed in partnership with Basa village. These dissimilar people on opposite sides of the world share fundamental values in their tolerant, peaceful, and simple approach to life.

“Godless” blends what Rasley has learned from the Basa Rai and Quakers with the classic American philosophy of Pragmatism to describe a values-based way of living. It encourages a spiritual response of awe and gratitude and advocates replacing divisive ideological politics with pragmatic decision-making.

Godless — Living a Valuable Life beyond Beliefs is a critique of fundamentalist religions and extremist political ideologies. It advocates guiding our lives by positive values and making pragmatic decisions. If we abandon superstitious beliefs, we can rally around the fundamental values of taking good care of ourselves, assisting those in need, and tending to the needs of our shared world. “Godless” recommends a modern pragmatic version of the Judeo-Christian ethic of loving self and neighbor.

It does not encourage readers to abandon their religious communities, but suggests a way to worship focused on awe and gratitude. It doesn’t demand leaving political parties, but proposes a pragmatic method of conflict resolution to replace the political gridlock of divisive ideological politics.

“Living a valuable life beyond beliefs” is a way of living with mindful attention to caring for ourselves and others. It is derived from the cultural wisdom of the Rai people of Nepal, values advocated by the Quaker Society of Friends, and the classical philosophy of American Pragmatism. It is a way to find a golden mean of balance between selfishness and selflessness.

Jeff Rasley’s undergraduate studies at the University of Chicago combined concentrations in Philosophy, Religion, and Politics; he received a J.D. from Indiana University and M.Div from Christian Theological Seminary. He is a professor at Butler University teaching an Honors class on philanthropy and nonprofit organizations.

What Inspired You to Write Your Book?
I figured something out in the last five years. It took a lifetime. The horrifying brutality of ISIS inflicted on nonbeliever in a twisted version of Islam is the final piece of evidence to prove the case.
The world would be more peaceful and livable if we ceased to believe in religious and political ideologies. A million people can negotiate their way up and down the streets of Manhattan. If some people walked straight ahead and pushed aside anyone in the way, because they believed they had the right of way, chaos and violence would break out. That’s the way the world is when people base how they treat others on beliefs instead of values. The hard-line right-side walker thinks, “I believe I have the right of way and I’ll knock you down if you don’t get out of my way!”
But that’s not how it works with most people most of the time. Because we value our own personal space and respect the personal space of others, pedestrian traffic weaves around, and people of different colors, languages, and cultures manage to negotiate the sidewalks of all the great metro areas of the world. Instead of operating out of a commitment to ideological beliefs, we usually base our behavior on positive values. Unfortunately, some charismatic, but inhumane, leaders convince followers to behave without regard for others or themselves.
“Godless” explains why beliefs divide us and how values unite us. Imagine a world of people and nations guiding their actions by shared values instead of competing ideologies.
“You may say I’m a dreamer
But I’m not the only one
I hope someday you will join us
And the world will be as one.”
John Lennon – Imagine

Book Sample
This book is dedicated to my friends in Basa village who have taught me the Rai people’s way of valuing everything, but especially human community. It is dedicated to 90-year old Howard Taylor, a courageous atheist and devoted member of First Friends Quaker Meeting in Indianapolis. It is also dedicated to Ray Schaefer, who sacrificed his life to end the suffering of his partner. Ray valued the education of Palestinian refugee children “more than living another ten or fifteen years,” and so gave up his life so that his estate would fund the Sabra-Shatila Scholarship Program “before he dissipated it on his own care in old age.”
~ ~ ~
Some names and factual details are changed to protect the privacy of the innocent and guilty.