You are here: Home / Non-fiction / God Behind the Movie Screen by Allen D. Allen @AllenDmusic 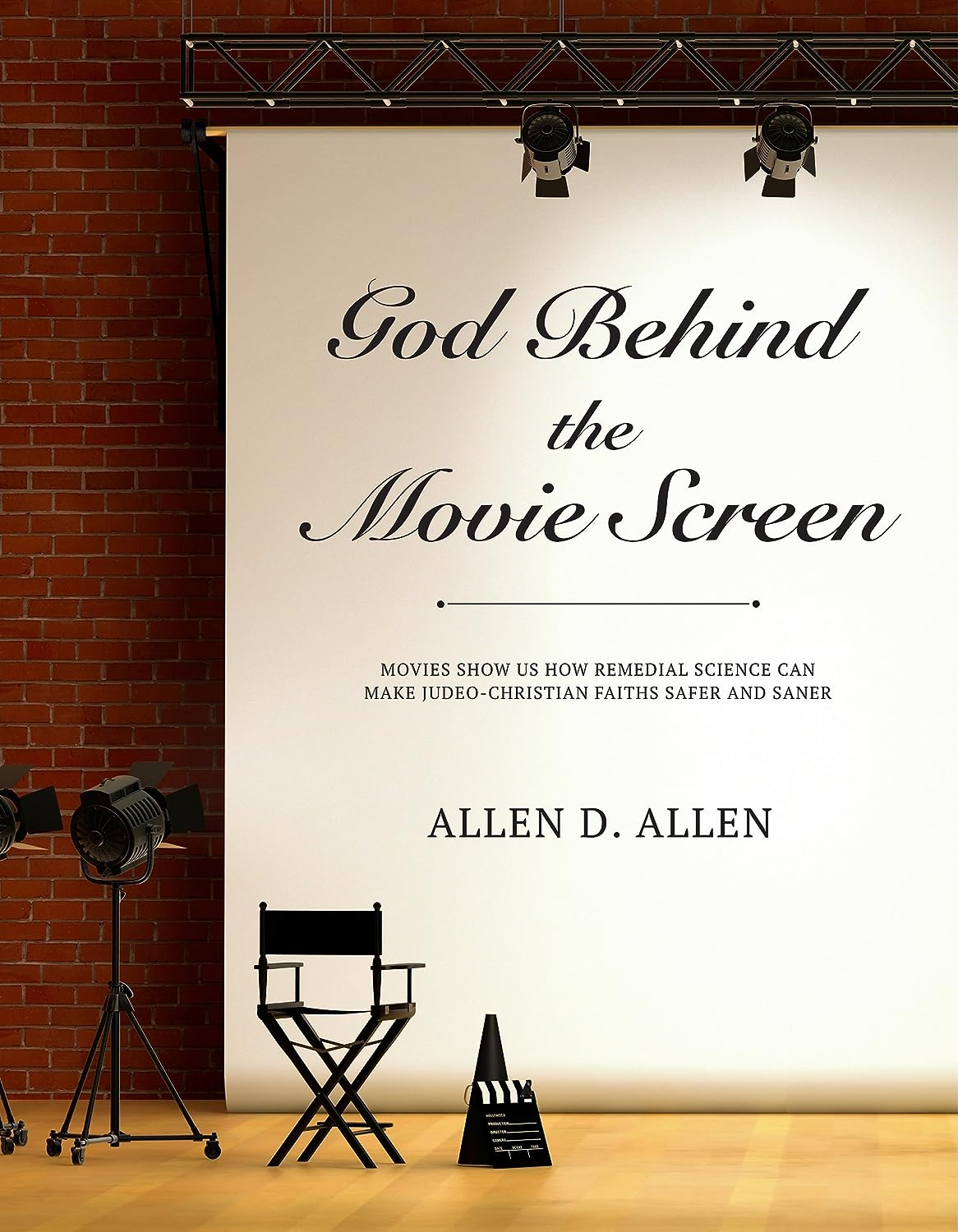 This eBook uses popular movies to show how to bring science and religion together. It uses the gratuitous ignorance in several motion pictures to demonstrate how little the public knows or cares about science. Note that gratuitous ignorance in the movies is very different from dramatic license. In the case of dramatic license, the filmmakers use an inaccurate or impossible scene that asks the audience to suspend disbelief in order to be entertained. But gratuitous ignorance serves no dramatic purpose. It simply reflects the fact that the filmmakers don’t know any better and it doesn’t matter because neither does the public. You’ll find several examples in the book.

As a result of this disinterest in science, Christians often give literal interpretations to biblical parables. This can make it appear as if a person has to be ignorant in order to be a Christian. Consider, for example, water and wine. Each fluid is made up of different kinds of atoms and the difference between those atoms is a tremendous amount of energy. This is where the atomic energy that powers the sun and stars comes from. As a result, to turn water into wine (something many Christians take literally) is the same as exploding a large hydrogen bomb. But few Christians take the Bible literally when it says that unruly children should be stoned to death. So, the problem is scientific ignorance, not religion. Indeed, if the universe were not as random as quantum mechanics proves, then there would be no free will and no sin or redemption, hence no need for religion. Did you know it’s become downright dangerous to deny that new species of bacteria are evolving that are resistance to antibiotic drugs? This is because of natural selection as Darwin described it. Does anyone really think God wants us to go extinct because of untreatable infections? Or is that the ancient Jews couldn’t have known about germs when Genesis was written? Moreover, the scientific truth can actually bring joy and comfort to observant Christians and Jews. The big bang theory, for instance, tells us that you can use your television set to see creation’s first light even today.

For a different perspective, the author uses the rule against card counting in casinos to show scientists how random events can serve a purpose, a purpose that reflects someone’s will. Counting cards when you’re playing blackjack makes it a game of skill and the casinos need it to be a game of chance. Games of chance provide the randomness that guarantees large profits for the casinos. Randomness also guarantees sentient life in the universe provided the fundamental constants have exactly the right value, as explained in the book. This means that scientists need not be atheists. Indeed, the obedience studies of Milgram, et al show that it’s better for society to have a religion based on a loving God. These scientific studies of obedience have shown time and time again that most people will commit evil acts, such as harming or even killing innocent people, if it pleases a human authority figure. It’s better to have a belief in a higher power that forbids such behavior.

If you’ve ever pondered the big questions, such as, “Where did we come from?” and “What does it all mean?” you’ll enjoy reading this book. Likewise, if you’re religious or just interested in science, this book is for you.

What Inspired You to Write Your Book?
It was a convergent of events that include a poll published by the AP this Spring, the recent activities and propaganda of Islamic terrorists, and the current domestic debate over religious liberty. This led me to the realization that I could use the gratuitous scientific ignorance in movies (as opposed to dramatic license) to explain why some parts of the Bible are understood and some parts aren’t, the latter creating ideas that can be both dangerous and sacrilegious.

Book Sample
In the spring of 2014, the Associated Press published the results of a poll on American attitudes toward science. This poll found that most Americans doubt scientific discoveries if they concern subjects with which the public is unfamiliar, such as the creation of the universe. This is also the reason for an apparent conflict between science and Judeo-Christian faiths. The Bible reflects human knowledge as it existed thousands of years ago when the books of the Old and New Testaments were written. People understand this when it comes to familiar subjects. When the subject is familiar, people can distinguish between what the Bible intends to teach and the antiquated way in which it’s being taught. Here’s an example:

Lesson for Parents: Children should be well behaved and disciplined when they’re not.

Deuteronomy 21:18–21: An incorrigible child, who misbehaves and defies his parents, should be taken to the gates of the city and stoned to death.

Most Americans would agree with the above lesson for parents. Combined with love, it’s the essence of parenting. Experts tell us that without limit setting, children can become spoiled, antisocial, and anxious. But Americans don’t take Deuteronomy 21 literally. From time to time, for example, American mothers kill their children, or try to. These women usually plead not guilty by reason of insanity. They never invoke scripture to claim it was justifiable homicide because their children were unruly. Likewise, an armed man who lies in wait for the chance to murder some teenage thugs isn’t considered pious in America; rather, he risks being sentenced to a long prison term. Would he be found not guilty if he cited Deuteronomy 21 and said, “God made me do it”? Not a chance.

About the Author:
Allen D. Allen is the author of God Behind the Movie Screen, an eBook published in August 2014. He is a retired scientist with an extensive body of published articles in the peer-reviewed physics and medical journals. Allen’s science training came from the University of California at Berkeley and Los Angeles. He has also worked as a film composer and has won several music awards. To learn more, go to GodBehindTheMovieScreen.com