You are here: Home / Fiction / Paranormal / Ghost of Death by Chrys Fey 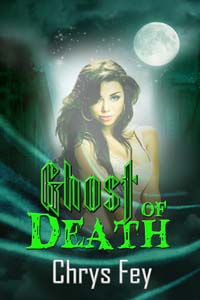 Jolie Montgomery, a twenty-one-year-old woman, wakes up in an alley next to her corpse. She has no memories of her murder or the night she died. She didn’t even see the killer’s face before he or she took her life. Wanting justice, Jolie seeks answers in the only way a ghost can…by stalking the lead detective on the case.

Avrianna Heavenborn is determined to find the person responsible for a young woman’s death. She gets closer to the killer’s identity with every clue she uncovers, and Jolie is with her every step of the way.
But if they don’t solve her murder soon, Jolie will be an earth-bound spirit forever.

What Inspired You to Write Your Book?
I got the idea for Ghost of Death when I was seventeen. One night, when I was reading in bed, the concept of a diary from the perspective of a sixteen-year-old ghost popped into my head. I had wanted to call it Diary of a Dead Girl, but after getting that idea, I didn’t do any writing on it. It wasn’t until I was ready to send Witch of Death to my publisher for consideration when I thought of this story, so I wrote it. However, it’s different from that first concept. It’s not in a diary format and it’s about a twenty-one-year-old.

How Did You Come up With Your Characters?
Jolie Montgomery, the ghost in Ghost of Death, is named after Angelina Jolie. Why? Because I think Angelina is an amazing actress as well as a smart, strong, and beautiful woman. I love all of her movies, and many of them inspire me with my thrillers. And she’s not only portrayed Lara Croft, my favorite videogame heroine, but also Maleficent, my favorite fairytale villain. She’s a fascinating woman who does honorable work as a US Ambassador. When I pictured the MC of Ghost of Death, I envisioned a young Angelina Jolie. And that’s how Jolie got her name.

Book Sample
With the sound of her mom’s grief wafting up to her, Jolie came to terms with her present state. I’m dead and now my mom knows it. She eyed the door in front of her. She hadn’t yet walked through a door, but if her hand could pass through metal then she knew she could move
through wood.
If I have to be a ghost then I’ll be a damn good one. All across the afterlife I’ll be known as the Ghost of Death! And I’m going to start by walking through this damn door!
She would’ve taken a deep breath to brace herself if she could have, so she mentally pumped herself up instead. You can do it! Easy-peasy. Nothing to it. And she took a step forward. Solid matter slipped around and through her form. On the other side, a familiar site confronted her: a black and white bed, the bright green shag carpet in the middle of the room, and a white desk.
Stepping up to her desk, Jolie eyed her ancient desktop computer, the one she used before her dad gifted her with a laptop when she announced she was accepted to the local university. Wanting to send out the first ever tweet from the afterlife, she pushed the button to bring the device to life, but her finger poker straight through it. Resigning to her Twitter-less fate, she moved toward the full-length mirror hanging on the wall. She saw nothing. Not even a shimmer in the air hinted at her presence.
Being a ghost sucks!