You are here: Home / Children and Young Adult Books / Gewgaws by C.M. Bacon 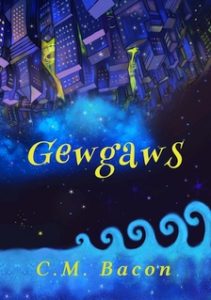 Perry Dobbs thought the past was buried and his best friend Arvin had moved away forever. But now that Arvin’s back, all Perry wants is to play video games and avoid the blonde dragon when she insists he leave the house to meet his old friend.

When Perry tries to prank Arvin, something goes terribly wrong. The duo are ripped from their world and thrust into a whirlwind adventure across the multiverse. Out of control, jumping from one treacherous realm to another, Perry and Arvin must work together and find the path home. While looking ahead, will they see what’s following behind?

What Inspired You to Write Your Book?
I was writing a sample story for my ESL students to read and emulate in my school's writing program. I got the idea for Gewgaws from one of the writing prompts.

How Did You Come up With Your Characters?
I sat down and imagined a kid talking to his mother and that's where it started. I didn't know anything about characters until the words left my fingertips and hit the keyboard. They told me their story, and I gladly wrote it down for them.

Book Sample
I opened my eyes, focusing them on the man who had helped me. His brown hair was kept tucked under his gray knitted hat, his beard was neatly trimmed, and he wore a beige button-up shirt with green letters V.E.A.D embroidered in onto the sleeve. He had blue eyes like the sky before dusk. Beside his brown boots, a large red-trimmed beige bag sat with green letters V.E.A.D embroidered on the top flap. The man was not short or tall, nor was he fat or thin. He was an ordinary man. In fact, he was as familiar a man as I had seen in a week.

“I’m Halvor, and this is my wife, Iwa,” he said, raising the canteen in his hand toward the woman helping Arvin.

Her brown hair was kept tucked under her gray knitted hat, and her shirt had green letters V.E.A.D embroidered on the sleeves. If Halvor hadn’t said she was his wife, I could’ve sworn they were twins. Iwa held Arvin by the chin as she poured water from another plaid canteen over his face, washing the black and red dust out of his eyes and ears.
“All better?” she asked.

Arvin raised a finger to his nose, pressing one nostril closed and, with great force, blew dust and boogers out the other side. Iwa jumped back to avoid Arvin’s snot rocket.

“Yep. All better,” Arvin said.
Iwa let out a high-pitched laugh. “Well, that’s one way to do it.”

“We had finished collecting today’s samples when we heard you call for help,” Halvor said. “Where did you boys come from? And why are you wearing muumuus?”

“I’m Perry. He’s Arvin. I don’t think you’d believe me if I told you anything else.” Arvin nodded again, trying to shake all the dust out of his various holes.

Iwa patted Arvin on the back, sending up a cloud of dust into the air. “Be glad we heard you. You’re both lucky to be alive.”

She coughed and reached into her pocket, pulling out three dust stained rags. She covered her nose and mouth with one and handed the other two to Arvin and me.

“Samples?” I asked, turning back to Halvor.

“Yes. Samples to analyze. How else are we going to figure out why it’s gone cold?” Halvor said.

“What’s gone cold?” I asked, taking the rag off my face, trying not to breathe in more rock dust. “What’s that smell? It’s horrible.”

“It’s the smell of hydrogen sulfide and a few other gasses,” Iwa said, pinching her nose closed through the dusty rag. “From the volcano.” Arvin and I looked at each other. “From the volcano you’re standing in.”