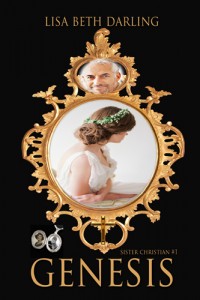 Along with Hannah comes a 3.5 million dollar trust fund and a whole pack of dark family secrets. Imprisoned in one group home after another for 30 years, Hannah struggles to communicate with the brother she’s longed for since she was a girl knowing this is her once chance at having the family that was long denied her. Is she too far gone or has she been the victim of the one person who should have protected her?

Mason is world-renowned for healing bodies but is woefully lacking when it comes to the human heart. In his fumbled attempts to save his sister she may just end up saving him.

What Inspired You to Write Your Book?
I started writing the Sister Christian Series a few years after I made contact with my birth family and discovered I had three brothers. I was raised an only child so the idea that I had siblings was rather new to me, growing up I often wished I had a sibling but then I’d go to my friend’s houses and see how they interacted with their siblings and went home happy I was an only child. The idea of the brother/sister dynamic always interested me even when my friends were shouting at each other over nothing. This series and a lot of its contents, planted deeply in the fertile ground of a writer’s imagination, grew out of those two situations.

How Did You Come up With Your Characters?
The same way I come up with all of my characters; the Muse delivered to them. From there, I spend some time getting to know them and filling them out.

Book Sample
With stiff joints, a numb yet burning hip, and a foggy head, Mason woke at 6am to the heavenly smell of frying bacon and brewing coffee. Tossing the blanket aside and trying to sit upright he wiped his eyes and saw Hannah puttering around in the kitchen.
He was stunned and amazed to see that his small dining table set with every single plate he owned. Although they were crammed unnaturally close, each one was neatly displayed with a fork, knife, and folded paper towel. Except for one, each plate had exactly four perfectly made pancakes sitting on it. Next to two plates was a steaming cup of coffee with more in the pot. The other plates had glasses full of milk next to them and when she ran out of milk, she used water for the last three place settings. If it had been anyone else, Mason would have been outraged over the waste of food in his cupboards but her behavior fascinated him. “Good morning, Hannah.”
Hannah was neatly dressed in her faded clothes with her hair combed she smiled as she motioned for him to come sit at the table. Hannah took her seat only after Mason did and then she made the sign of the cross, put her hands together, bowed her head and began to pray.
Instead of starting the morning with an argument, Mason waited until she was done before reaching for anything on the table even though the smell of fresh coffee and pancakes was making his stomach rumble. “Are we expecting company? Who’s coming?”
Smiling and nodding she pointed to the table with all of its chairs and place settings that she worked very hard to find. “Yyy-ou,” she pointed to him and then went to his left, “Rrrrr-Red.”
“Red likes coffee?”
Hannah nodded in answer to his question.
“Say it,” he encouraged firmly. “I know you can talk. I just heard you so stop trying to snow me, got it? Talk.”
“R-r-r-Red cuff-ee.”
“You don’t like coffee?” He took a sip of the dark brew and felt himself start to greet the day. Just like the cookies yesterday and the pancakes sitting before him today, the coffee was delicious.
“I-I-I do.”
“Well then,” Mason put the full coffee cup in front of her.
She looked up at him as though he had just been caught with his hand in the cookie jar fifteen minutes before dinner. “N-nah-no, R-r-r-Red,” hurriedly she put it back by the plate.
Mason passed his hand in the air around the table hoping to show her the seats were empty, “Red’s not coming, remember? Just you and me.” He picked up the cup and put it in front of her again. When she tried to move it away for a second protesting fervently that the cup belonged to Red, Mason moved it back and let it sit next the plate. Getting up from the table, he plucked a clean coffee cup from the cabinet and put it in front of her. She stared at the cup but didn’t try to put it back, “Who’s Red?” Mason took the pot off the burner and filled the cup in front of her.
Hannah’s bewildered gaze turned from the steaming cup of dark brew sitting across the table to brother’s narrowed eyes. “R-rrr-Red,” she said in a definitive voice.
“Got that part,” Mason nodded as he resumed his seat and sipped the coffee letting it warm him and raise him. Although he wouldn’t admit it, he found it oddly comfortable to sit here sipping his morning coffee at his dining table rather than grabbing it in town on his way into work. That didn’t mean she could stay.