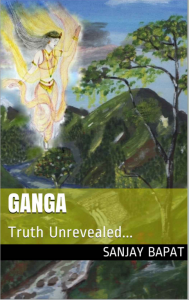 What Inspired You to Write Your Book?
I have been fascinated by the story of creation of River Ganges from childhood, the story has been described in Indian epics like Ramayana. The story has emphasis on the human ingenuity and efforts but always felt the way its described or narrated the envelope of spirituality and divine intervention takes the sheen away of the human effort.
So after having thought through the same story in light of new information like changes at the end of last ice age I decided to narrate the story in different light without that envelope.

How Did You Come up With Your Characters?
As the story is based on the story told as part of the epic the main character outlines were already available and I had to put flesh and blood to those outlines to make them alive but I had to create number of new characters which must have got omitted as the story got condensed to be included as part of the epics.
I really enjoyed creating the characters like ‘Shunga’, ‘Sauda’, ‘Aditya’, ‘Amrapali’ , ‘Subala’ , ‘Gautam’ and those standing shoulder to shoulder with the main characters like ‘Bhagirath’, ‘Anshuman’ and ‘Sagar’

Book Sample
Royal palace at ‘Ayodhya’ capital of pan India Ikshvaku Empire where emperor: Sagar was thinking about the drought going on for ten long years and the obstacles it was posing for his expansion plans. Sagar, a ripe old man had seen many droughts in all those year but this drought seemed to be getting severed by the passing year and thousands had perished at its perils.
As a seasoned politician and victorious general of many wars he was well aware that each passing year was increasing the chances of instability of his empire and his failing health meant his enemies especially Gandhara King: Subala where just waiting for the opportunity to strike at the core of empire that he had so painstakingly built over the years on two pillars war and trade. Under his leadership Ikshavaku’s had maintained complete control on the metal mining and sugar production allowing him to ruthlessly get rid of the enemies and run unprecedented control over the empire.
Wise men like ‘Kapil’ and ‘Vashishta’ had been telling him that only bringing River Ganga to his empire would help. He was hoping that his grandson and eminent successor: Anshuman would succeed where he had failed. Recent news encouraging news from the mountains meant he had every reason to be optimistic. Question was would he live to see the crowning glory himself or even Anshuman would fail and the baton would be passed on to his son: Dilip? Only time would tell …