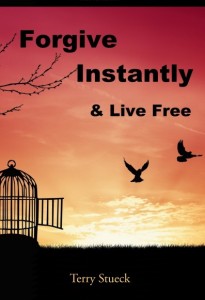 Terry Stueck helps the reader gain insight into the motivation within that causes us to choose the paths we take. You will learn how to find the baggage, correctly forgive, and be set free from those paths of anger, stress, hang-ups, and addictions. You will improve your ability to “let go” by mastering the second component of forgiving, which most people are unaware of. You can learn to cure anger instead of just managing it. This book walks you through the “how to” of having real change in your life that will last. Terry Stueck has approached the subject in a practical way so that the reader can follow easily. Stueck brings the words of Jesus from the Sermon on the Mount to life for the reader in simple, understandable terms that make forgiving everybody for everything instantly easy and within reach. The principles contained in Forgive Instantly will truly set you free. The book is great aid for anger management and marriage counseling. It is a must read for those wanting to follow God in a deeper way.

What Inspired You to Write Your Book?
Personal life failures set me on a journey to search for the answers and solutions to why we do the wrong things or make bad choices. I found the answers in the word of Jesus from the Sermon on the Mount. It is far better to seek to follow Jesus than it is to follow knowledge. Much learning and Bible knowledge is not the answer. Learning is a worthy goal, but what good does it do to know something if you don’t deeply understand it or follow it.

How Did You Come up With Your Characters?
I wanted to be a follower of Jesus and not of Paul, Peter or other leaders of the Christian world. Following a denomination makes you a follower of someone’s interpretation of the Bible. I sought to dig deep into Jesus and just follow Him. It was not enough to know what He said, but rather to actually do what He said was life changing.