You are here: Home / Faith and Religion / Prophecy / For Love of Mary: A selection of modern private revelation by Catherine Cavanagh 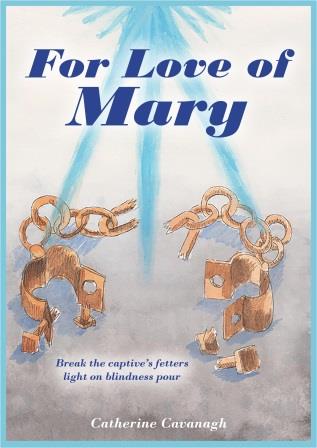 God is always speaking to us, always, if we have ears to listen. Sometimes that message comes to us in the way circumstances play out in our lives. Sometimes the message comes through an ordinary conversation. Sometimes that message comes from hearing a preacher, praying through passages in the bible or while reading a book. Sometimes the message comes as a deep heartfelt conviction. They are the ordinary ways.
But when God wants to send a message to the world, to a nation or to a culture, He raises up a prophet. The holier that prophet, the more open to doing God’s will that prophet is, the more effective that prophet will be in transmitting God’s message and only God’s message. We know that the mother of Jesus surpasses everyone else in holiness because she alone was found worthy enough to carry the Son of God in her womb. We know that the mother of Jesus surpasses everyone else in doing God’s will because she gave her assent to the crucifixion and death of her only son and stood humbly and valiantly in loving submission to God’s will at the foot of Cross of Jesus. Therefore it should come as no surprise that when God wants to send a message of the utmost importance to the world that He uses Mary as His messenger.
Since 1830 there has been an increased frequency of Marian apparitions throughout the world, and in the last 50 years her reported appearances have been even more numerous. The Church in wisdom and prudence takes a long time to make an official judgment on the authenticity of any Marian apparitions, and in the meantime allows people to undertake their own personal discernment. Even when a positive judgment has been made by the Church, and a series of apparitions has been declared worthy of belief, no one is compelled to believe in them. However if the judgment is negative, then no one should give them any credence whatsoever.
Apart from well-known pilgrimage places like Guadalupe, Lourdes and Fatima, relatively few people know of the more recent Marian apparitions and locutions. This book is intended to be like a tasting plate in a restaurant, providing an introduction to some of those more recent messages and directions to where more information can be found. To permit readers to compare the consistency of the messages coming from sources all over the globe, they have been put together under the theme of the Immaculate Heart of Mary.
The book starts with examples of Australian holiness, to show what lives fuelled by devotion to the Sacred Heart off Jesus and the Immaculate Heart of Mary can accomplish.
Then the messages are grouped according to the person or place they were given, including Matthew Kelly, Australia; Nancy Fowler, USA; Sr Lucia of Fatima; Medjugorje; Litmanova; Fr Stefano Gobbi, Italy; Carmela Carabelli, Italy; Geraldine, Australia; Elizabeth Kindelmann, Europe; ‘Mariamante’, USA; Catalina Rivas, South America; Rwanda, and others.
Following them are some reflections on how to make devotion to the Sacred Heart of Jesus and Immaculate Heart of Mary part of your lifestyle and a collection of prayers.
If God has been trying to get the same message to people of different continents and cultures, to people of different genders, ages and states of life, then that message has to be of the utmost importance. If so, to not investigate the messages for your self would be folly.

What Inspired You to Write Your Book?
The initial inspiration was over 15 years ago, and at that time I put together a small booklet to refute someone who told me that devotion to the Sacred Heart of Jesus and Immaculate Heart of Mary was irrelevant to modern life. Even then I knew experientially that this someone was mistaken, and that the messages in private revelation were too consistent to be ignored. The thought of redoing that booklet into something larger has been with me for a long time. Why now? Recently we were without electricity for almost a day and had to rely on candles for light. During the daytime they weren’t needed, but as the evening came they became essential. The increasing social and political difficulties of our era together with terrorism and threats of war are like a deepening of darkness. In the darkness you need a light to show you the way back to peace and to hope. Even sailors look to the first star of morning to reassure themselves in the midst of darkness that the dawn will come. Mary, the mother of Jesus, is a gentle and constant light that reveals not only the path to eternal happiness but also the path to terrestrial peace. It is not for nothing that bygone centuries have called her the Morning Star and Star of the Sea. Who else is better qualified to stop children squabbling and to help them become friends again than a mother? As the darkness deepens, the messages God has given her to convey need a wider audience.

Book Sample
Excerpt from the chapter on the messages given to Carmela Carabelli
These messages were given to Carmella Carabelli, a widowed mother of a large Italian family from 1968 until her death on 25 Nov 1978. During her lifetime she met St Padre Pio and became his spiritual daughter, and later when the cause for the beatification of St Faustina Kowalska was introduced, these messages about God’s merciful love began. Most of them were from Jesus, but some of them were from Mary and other Saints.
Message Thursday, August 22, 1968
My child, invite all men of the earth to take refuge in the Merciful Heart of My Mother, and they will be saved. In their inability to accomplish what I desire, offer to Her the hearts of men, good and bad, so that one more time, the world be saved through Her intermediary and so that Her Immaculate Heart, Dwelling of the Holy Spirit, may triumph on earth.
Message Wednesday, August 14, 1968
She knew My Death would be your salvation; that is why She accepted to have Her Heart transfixed. She, the most innocent and the tenderest of mothers, accepted to feel Me wrenched from Her Heart, so that My death might be the Life for all men. That is how She co-operated in your redemption.
Obey this incomparable Mother. She is speaking again and not only in Her apparitions which are taking place on earth in many places, but She also speaks to your heart through her images, through the intermediary of Her Ministers who love Her the most, who spread Her devotion, who speak of Her and make Her loved.
She is speaking through the intermediary of the Head of the Church who, in accordance with My Will, made Her its Mother. I assure you that just as the Apostles drew from Her words and Her teachings the light and grace to know the Divine Mysteries and to diffuse them, so the Priests who have recourse to her, Seat of Wisdom (and I am the Incarnate Wisdom who dwells in Her) and Spouse of the Holy Spirit, will receive from Her special gifts.

Buy For Love of Mary: A selection of modern private revelation On Amazon