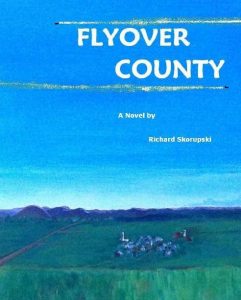 The deteriorating economic and social climate in the eastern seaboard had Bill and June in a tailspin. Urged on by a business deal with a former acquaintance they decided to look for a better life. The family moves to a tiny town on the high plains in rural South Dakota.

This story is about the family and how they interact with the people. As you read, you see them learn the culture and the climate of their new hometown. The story is a light-hearted tale of culture shock and humor.

The book is intended to get you to smile. It is broken down into easy-reading chapters. Most can stand alone as a short story yet the whole thing strings together into a novel about a family in transition from city to country.

Flyover County has been called, “A nice book about nice people.” It is an escape book. Curl up in your favorite chair and travel with me to a place in Flyover County. Escape with me to Helen, South Dakota and the Weber family. Read along as the hard shell of city living is softened by nice people and honest values.

What Inspired You to Write Your Book?
My wife and I moved to rural South Dakota in 2004. We found a culture here that has been lost in the large cities of the east and west coasts. The culture is or honest, more genuine and, frankly, much more pleasant.
I fell in love with Rural America and in doing so I fell in love with America again.
I love it here so much I had to write about it. I couldn't write local history, because I hadn't lived her to learn it. I couldn't write a documentary, because I was an outsider.
So I chose to write fiction. I created a small town and now I write about the local characters in that town.

An incident similar to this actually happened to me when I was visiting a friend in rural Iowa back in the eighties. It typifies life in small town America.

To set the stage, Bill Weber is a suburban transplant and new to small town living. Henry is the mayor of Helen, SD (pop 295). Henry owns a small engine repair shop and Bill is a realtor in the county seat.

Henry's home is less than one hundred yards from the post office, yet Henry would drive to get his mail each morning. When Bill challenged Henry about driving such a short distance, Henry replied it took too long to walk.

Bill bet Henry a cup of coffee at the Helen House Cafe they could walk to the post office from Henry's home in under five minutes. Here's what happened.