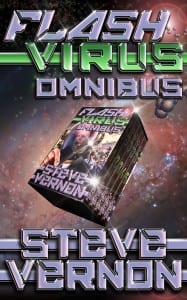 This is the story of the end of the world – as told by a teenager.

“So as near as I could tell the end of the world began roughly about the time that Billy Carver’s butt rang – about halfway through the War of 1812.”

Sixteen year old Briar Gamble is having a bad day. It started with the cell phones singing for Santa Claus. Then came the tanks and the storm troopers. The Black Masks, in their black fish bowl sunglasses. And then along came Captain Albino.

That’s how it all started back in October 2012 when I released the FIRST episode of FLASH VIRUS. What you are looking at now is the first FIVE episodes of FLASH VIRUS – and the first full length novel in the series.

SO – in all honesty – if you have already read those first five episodes of FLASH VIRUS you can probably get away with not purchasing this volume.

But, if you haven’t read those first five episodes – then what are you waiting for?

Targeted Age Group:
Fourteen and up

How is Writing In Your Genre Different from Others?
I love to imagine ordinary people doing extraordinary feats.

What Advice Would You Give Aspiring Writers?
Write what is in your heart.

Finish what you start. Never leave ANYTHING half done.

When you finish, put it away for a week or two. Then read it aloud and listen to what you are saying. The sentences and words that clunk – those are the ones you need to fix!

Author Bio:
“If Harlan Ellison, Richard Matheson and Robert Bloch had a three-way sex romp in a hot tub, and then a team of scientists came in and filtered out the water and mixed the leftover DNA into a test tube, the resulting genetic experiment would most likely grow up into Steve Vernon.” – Bookgasm

“Steve Vernon is something of an anomaly in the world of horror literature. He’s one of the freshest new voices in the genre although his career has spanned twenty years. Writing with a rare swagger and confidence, Steve Vernon can lead his readers through an entire gamut of emotions from outright fear and repulsion to pity and laughter.” – Cemetery Dance

“Armed with a bizarre sense of humor, a huge amount of originality, a flair for taking risks and a strong grasp of characterization – Steve’s got the chops for sure.” – Dark Discoveries

“Steve Vernon was born to write. He’s the real deal and we’re lucky to have him.” – Richard Chizmar

“The genre needs new blood and Steve Vernon is quite a transfusion.” – Edward Lee, author of FLESH GOTHIC and CITY INFERNAL

What Inspired You to Write Your Book?
I wondered to myself what would happen if a teenager was to witness the end of the world – and live to tell about it.