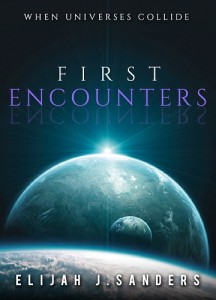 Meet Sam. Sam is a genetically enhanced soldier of the Sci-Fi future, a secret agent of the top most priority. Together with his partner Zule, they complete the most dangerous (and ominous) missions throughout the solar system on behalf of Earth’s evil government.

Although it becomes clear in Sam’s contience that what they are doing is wrong, Zule is not convinced. However, after finding out the dark history behind their past, Zule goes berserk, attacks their base, and then flies away. Sam is left to pay the penalty.

Foiling his attempted assassination, Sam is forced into exile where he hopes to find his partner and only friend. While in exile he stumbles upon an advanced alien piece of technology. Supposing it’s a weapon, he activates it, and finds himself accidentally pulled into another universe!

Sam ends up on a space ship, face to face with the strangest creatures he’d ever seen. Unfortunately, their ship is attacked and they crash land on the planet surface below, the planet of Titrika. On a strange alien planet, in an alternate dimension, and 10,000 miles away from an advanced civilization, Sam is forced to cope with his new alien companions.

Sam immediately befriends Kenochi, a Yat-Yat and the leader of the group. Kapi, a Zari and co-pilot, also quickly becomes a friend with Sam. But Sojay, the reptilian Captain of the ship is not so optimistic of Sam at first. Neither is Erik, the mysterious ferret. He’s a Shape Shifter who’s become part of the alien crew. Over 1,000 years old and he doesn’t know where he came from, or anything about his supposedly extinct race. Erik poses as a pet of the group. His smarts though do not go un-noticed by Sam, who is suspicious of his role in the group and his fond relationship with Kapi.

Together these aliens make up the Imperial Knights of the Titrikan Empire, also secret agents of the top most priority. They serve and protect the Emperor, the Empire, and it’s alliances. Using highly advanced technology called a Phase Shift Drive, they’re able to travel great distances inter-dimensionally.

Sam and the group head off through the prairies and woodlands of Titrika on a great fantasy adventure to get to Jayak Village, the home of the Gate of Holianji. It’s a portal that Kenochi’s father created. And with it, they can reach the Titrikan Empire.

Along the way they face Medieval armies, terrifying Grullocks, and the notorious General Kanglu – who kills Gamallon, a companion the group find along the way. General Kanglu has also plotted an attack against the Empire. He’s amassed an army, employed the help of the dreaded Jukai, and developed a deadly new weapon. And he’s heading straight for the portal! It’s up to Sam and the mis-fit alien crew to stop him!

Along their journey, Sam finds himself haunted by his past deeds and his worries of Zule and the Earth. And every night, he suffers from bad dreams and flashbacks. What he doesn’t realize, is that this new found journey will lead to his redemption and a new life.

The group then finds that they are the only ones with a secret key to the portal, and when they finally reach Jayak Village via a Cloud Ship, they must fight General Kanglu and his army to reach the portal first.

After reaching the Empire and defeating General Kanglu, Erik the Shape Shifter finds a lead about his past which may lead to a whole new technological age for everyone, and the satisfaction of a lifetime of curiosity.

Also while in the Empire Sam is chosen by the Emperor to become one of the Imperial Knights and his destiny is changed forever. After two more assassination attempts – in a Universe not his home, Sam is finally able to return to Earth. But will he want to stay?

This is a Sci-Fi and Fantasy adventure that you don’t want to miss!

What Inspired You to Write Your Book?
This was actually an undertaking over 5 years in the making. The concept of the alien character types started in high school during a creative writing assignment, and it grew over time as I imagined this new world, universe, and ultimately the story in the making. When I actually began to write the story, I did so out of fear and thus saved my only copy on a single flash drive… which crashed. I forgot about writing the story for a long time after that, but didn’t stop thinking about it. Finally I picked it up again and began to write it down on paper. I hit writer’s block a while later and stopped, again, for a long time. When I moved to Indonesia I finally picked it up again, and converted to typing it out once I had a laptop (making sure to have at least 2-3 copies in different places).

I wanted to finish this story because it was just so vivid in my mind and I really wanted to get it out there and actually finish something. So it began. When I had finished 31,000 words, I though I had finished the story. And it wasn’t until taking a self-Publishing course that I was convinced I needed to put it up to an editor.

His feedback got the story before you to 51,000 words, and filled in many missing details and created a lot more content to read 🙂

And here we are, self published, doing research, and seeing all of your lovely reactions to this world.

In general, I think I just have ideas coming all the time, and already have several other books and stories in line to be written 🙂

How Did You Come up With Your Characters?
Extensive thought is how I came up with the characters, lol. Honestly just imagination, and daydreaming about the book and the characters as they came into play before I even started writing. I probably thought about it a little too much actually, but it’s helped it become what it is today. Some characters I had to make up on the fly as they were either temporary characters or didn’t come into play until half way through the story or near the end.

Actually Kenochi and Sojay were pulled and transformed from that original piece of creative writing I mentioned, from back in high school. It was a short story about two friends who went on a journey together to restore an ancient, ruined, city and return it’s people to it. Sojay’s character wasn’t actually reptilian at that time, but a blue humanoid with four arms. His vivid blue skin (and Kenochi’s blue colored particles) may have been influenced by the fact that blue is my favorite color… and that I dyed my skin blue with food coloring… twice, back in high school 😀 Only my hands, face, and neck though (all visible parts of me). I don’t recommend it, as it doesn’t come off easily, and kind of fades away over a week or two.

All the others started to come as I just daydreamed about genetically modified soldiers and aliens, lol.

Book Sample
“Who are you?” he asked inquisitively.
“My name’s Sam, I’m f-from the planet Earth. I’m in
charge of… of keeping the peace, protecting the people,
and… stuff like that… sir.” Sam wasn’t really sure what he
had been doing for the last few years, it seemed less and
less like what he had been told he was doing.
“My name is Sojay” the pilot replied, “I’m the capt…
was the captain, of this now, COMPLETELY EMPTY
SHELL OF A SHIP!” As he finished this last statement, he
was almost hovering over Sam.
“Good!” came the almost cheery voice of the co-pilot,
a welcome interruption to Sam’s predicament.