You are here: Home / Fiction / Paranormal / Finity: Above and beyond by Eve Saxe Haven 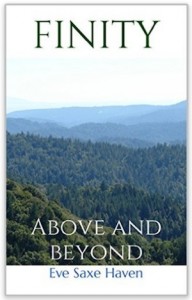 Finity is the story of a female, who finds herself in an unfamiliar place and has no recollection of who or where she is. She has no choice but to convince a young adult, struggling with social issues, to help her figure out her past. During their investigation, they discover that the reality they know is not what it seems. Inevitably, they find themselves having to deal with strange phenomena and unknown danger.

What Inspired You to Write Your Book?
I always wanted to write a book. It started when I was really young. I have the ability to draw and thought that my first book would be one for little children, i.e. five words per page and ten pages with pretty pictures! At some point I got older. Following my half-a-lifetime of experience, I realised that I could write for an older crowd and a story started to unfold in my mind. I wanted to reach adolescents and young adults with the aim of inspiring them to find a way to handle life’s problems and not to back down. I have always believed in helping others and am inspired when others do the same.

How Did You Come up With Your Characters?
The characters were created from different aspects of my own personality. They are based somewhere between who I was and who I’d like to be. Their vices and virtues are mainly some of my own, which I find irritating, as it reminds me of a few shortcomings that I still have. The rest of my characters are a mash-up of features and traits associated with any kind of human that can be found on planet earth. I have not based the characters on anyone that I know, except for one person. My field training officer that passed away a few years ago. He had this scary-beyond-imagination demeanour and could see right through your soul when he stared at you. After an altercation, we became very close friends! Funny how that happens.

Book Sample
Too tired to care, she sat and looked around. The part of the neighbourhood that she was now in appeared exactly the same as the one where she came from. The well-kept properties were so very similar. Only minor differences distinguished them from the rest. She decided that her feet hurt too much to try find Summer again. The relief from sitting down was barely enough to allow her to relax. The blonde female held her head in her hands and rested her elbows on her bent knees. She started to go over the options in her head. Unfortunately, the list was short. Amnesia, two people in white clothing and strange surroundings.
I’m nuts, she thought, resigning herself to the belief that she was either in an asylum or had recently escaped from one. It scared her to think that what she was experiencing could all be a delusion. It looked and felt so real. But she also felt strange enough to know that something was not right. Perhaps she had been medicated before her escape and the effects were wearing off. Either way, it didn’t matter to her anymore. She was too tired and in too much pain to go any further. It would be far easier to let someone find her.
“Do you think you’re dreaming?” asked a little voice.
It was Summer. She had appeared out of nowhere. Again.
The blonde lifted her head and sighed. She was frustrated, confused and in pain. Even with all that, she decided that Summer’s company was better than being alone, even if it was entirely weird.
“I’m not dreaming,” she said, trying to convince herself. “A dream wouldn’t hurt as much”.
Summer stood directly in front of her, “They’re coming, you know,” she said.
“Who’s coming?”
The little girl smiled and swayed, playing with the hem of her nightgown, “I went to tell them that I found you,” she said, “but they knew all along. They’ve been watching you.”
The blonde felt a little disturbed at what Summer had said. She forced herself to smile, trying to convince herself that everything was okay. She then thought about how such a cute little girl could be so damn creepy. It didn’t matter. She couldn’t care at this point. Whoever was coming to get her was going to find her.

Links to Purchase Print Books
Buy Finity: Above and beyond Print Edition at Amazon

Buy Finity: Above and beyond On Amazon