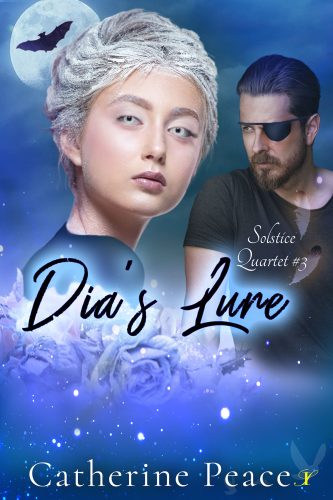 When Dia finally gets caught, she has to decide: flee or fight? Or…fall in love?

After years on the run, Dia Ngata’s luck has run out. Not by hunters, though, but by a reclusive bat shifter colony and the witches bound to them. The worst part? Her fellow captive happens to be Carver Kano, the ex-lover who betrayed her all those years ago.

Carver Kano admits his mistakes, and his biggest was being too late to stop the slaughter of Dia’s tribe. Ever since, the investigative journalist has focused on putting the biggest and baddest behind bars; however, he can’t escape the prison of his guilt.

When he gets captured by the bat colony, he doesn’t expect to form a friendship with the handsome bat shifter Milos or to have a chance to earn Dia’s forgiveness. Dia plans to escape as soon as possible. And Milos? He simply wants to survive.

Dia is Kano’s mate, but Milos ignites something in them both. When someone from Kano’s past threatens the colony, can the trio put their fears and mistrust aside? Or will history repeat itself once more?