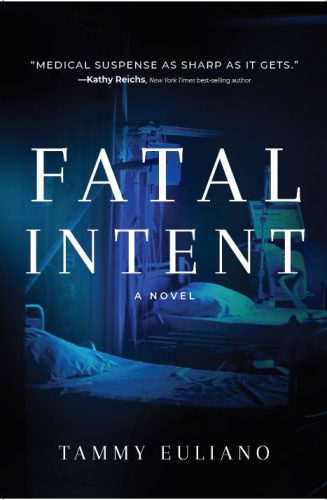 When her elderly patients start dying at home days after minor surgery, anesthesiologist Dr. Kate Downey wants to know why. The surgeon, not so much. “Old people die, that’s what they do,” is his response. When Kate presses, surgeon Charles Ricken places the blame squarely on her shoulders. Kate is currently on probation, and the chief of staff sides with the surgeon, leaving Kate to prove her innocence and save her own career. With her husband in a prolonged coma, it’s all she has left.

Aided by her eccentric Great Aunt Irm, a precocious medical student, and the lawyer son of a victim, Kate launches her own unorthodox investigation of these unexpected deaths. As she comes closer to exposing the culprit’s identity, she faces professional intimidation, threats to her life, a home invasion, and, tragically, the suspicious death of someone close to her. The stakes escalate to the breaking point when Kate, under violent duress, is forced to choose which of her loved ones to save—and which must be sacrificed.

What Inspired You to Write Your Book?
The idea of managing the end-of-life has fascinated me since way before any kid should think about such things. We had a debate in my 5th grade class about the fate of Karen Ann Quinlan, a young woman in a persistent vegetative state whose parents wanted her ventilator disconnected, while the State of New Jersey disagreed. I don’t recall what side my 10-year-old-self argued, but the question never left me. Medical technology and the ability to keep the body alive has far out-paced our ethical ability to deal with the implications.
In medical school and residency, the question resurfaced repeatedly, while watching families’ extended mourning in the ICU, and anesthetizing patients for innumerable procedures despite little to no hope of a meaningful recovery. Meanwhile, the absurd cost of medical care in the US frequently made the news, especially expenditures in the last few months of life and final hospitalization.
As my career progressed and I achieved the goals I’d set for myself, it came time for reinvention, and that’s when this “encore career” became a possibility. The characters of Fatal Intent took up residency in my head, invading my sleep, and even my waking hours. It was time to give them voice. I resigned my time-consuming administrative positions, wrapped up my ongoing research projects, handed off most of my teaching responsibilities to up-and-coming faculty who needed it for their resumes, and dropped to part-time at the hospital so I could make a real investment in my writing.
From there it took several years to learn how to write. It’s so very different from the technical writing I did for decades. Once I found my tribe of writing supporters and teachers and editors, at last it came together and I couldn’t be happier to finally share Kate’s and her crew with the world.

How Did You Come up With Your Characters?
Dr. Kate Downey, the protagonist in my debut novel, is quite a lot like me. Shocking for a debut author, I know. Though a few years my junior, ahem, we share careers as anesthesiologists who specialize in obstetric anesthesia and teach medical students and residents, sometimes using a simulated operating room environment.
Our personalities overlap a bit, or did when I was her age, but there the similarities end. Instead of my tragedy-free life to date, she suffered the loss of her parents and now the traumatic brain injury of her husband. Boy, are we authors cruel, or what? I have to keep reminding my husband that Kate is not me, and he is not her comatose husband, Greg. As for her dog, I’m afraid mine is just as energetic, spoiled, and completely untrained…times two.
One of Kate’s many blessings, though, is her Great Aunt Irm, who moved in after Greg’s accident. I based this character on the favorite relative of my early-career mentor. Dr. Gravenstein was a model physician and teacher whose Aunt Irm was important in his orphaned childhood in Germany during World War II. He planted the seed that set me on this encore career as an author, so I borrowed Aunt Irm as a bit-part character, except she stole the show. My readers and I have fallen in love with her — her maternal instincts despite being childless, her loyalty and compassion, her mixed up English idioms.

I dreaded weekends. That alone set me apart from my colleagues—from humans in general—even without all the rest.
Nights I could handle. By the time I ate dinner with Aunt Irm, took Shadow for a run, and played cards or read aloud with my great-aunt, exhaustion would claim me. But weekends brought spare time, the enemy of all who grieve.
On Saturdays, the few hours I spent in Jacksonville at my husband's bedside offered little comfort. Watching him waste away tore at my heart, at my conscience, but it hadn't been a year yet. There was still hope.
I woke Sunday morning earlier than I'd planned—or wanted. Pots clanged in the kitchen. For my Great-Aunt Irm, all days were the same; and sleeping in was as foreign as the idioms of her adopted country.
Shadow pushed past me as I opened my bedroom door. "Good morning," I said to Aunt Irm, my voice gruff with sleep.
"Oh, kindchen, did I wake you? I have much to do before church this morning."
Aunt Irm had called me "kid" in her native German since I was a child. Even now, as I approached thirty, she almost never called me Kate.
I breathed in deeply and smelled not the aroma of Sunday breakfast, but an Italian restaurant. "What are you making?"
She pointed around the kitchen. "Lasagna, minestrone soup, and tiramisu. I am sorry, no time for breakfast."
"That's fine, but when did you become Italian?"
"Carmel gave me the recipes." She held up handwritten pages. "She does not have enough time before the wake."
"Wake?"
"Yes, I told you last night."
Oops.
"Carmel's next-door neighbor, Isabelle's husband's cousin passed away."
And I didn't remember . . . shocking.
"Just like my Max," Aunt Irm went on. She jabbed a finger toward me. "There is no minor surgery. What you do, it is dangerous."
I'm an anesthesiologist. It's not dangerous for my patients, or for me for that matter, and ordinarily I would argue with her, but we'd long since pounded that dough to cement. Aunt Irm's brother, my Uncle Max, died two days after an operation to place a feeding tube. It's a common operation, especially in old, sick patients. But in her mind, the operation, or more likely the anesthesia, killed her beloved brother. Not his obesity, diabetes, heart disease, love of alcohol, or recent stroke. His doctor signed the death certificate, no need for an autopsy. The death was not unexpected.
"I'm sorry to hear about your friend," I said.
"Oh, I did not meet her." Aunt Irm turned back to the stove.
Only she would spend her Sunday morning preparing a feast to celebrate the life of someone she'd never met.
Pans and trays lined the countertops. "How many people are they expecting at this wake?"
"Oh, did I not say? Half is for the wake; the other half is for a funeral at Saint Mark's this afternoon."
"Tough week." When Aunt Irm joined a church, she joined a church. Less than a year since moving to Florida, she was on more committees than there are days in a week, including the bereavement committee.
"When it rains, it snows," she said.
"Pours. When it rains, it pours."
She gave her “whatever” shrug, along with instructions for constructing the tiramisu. Apparently, I was on the bereavement committee as well.