You are here: Home / Book Excerpts / Excerpt From Tumbleweed Forts by Daniel B Ferry 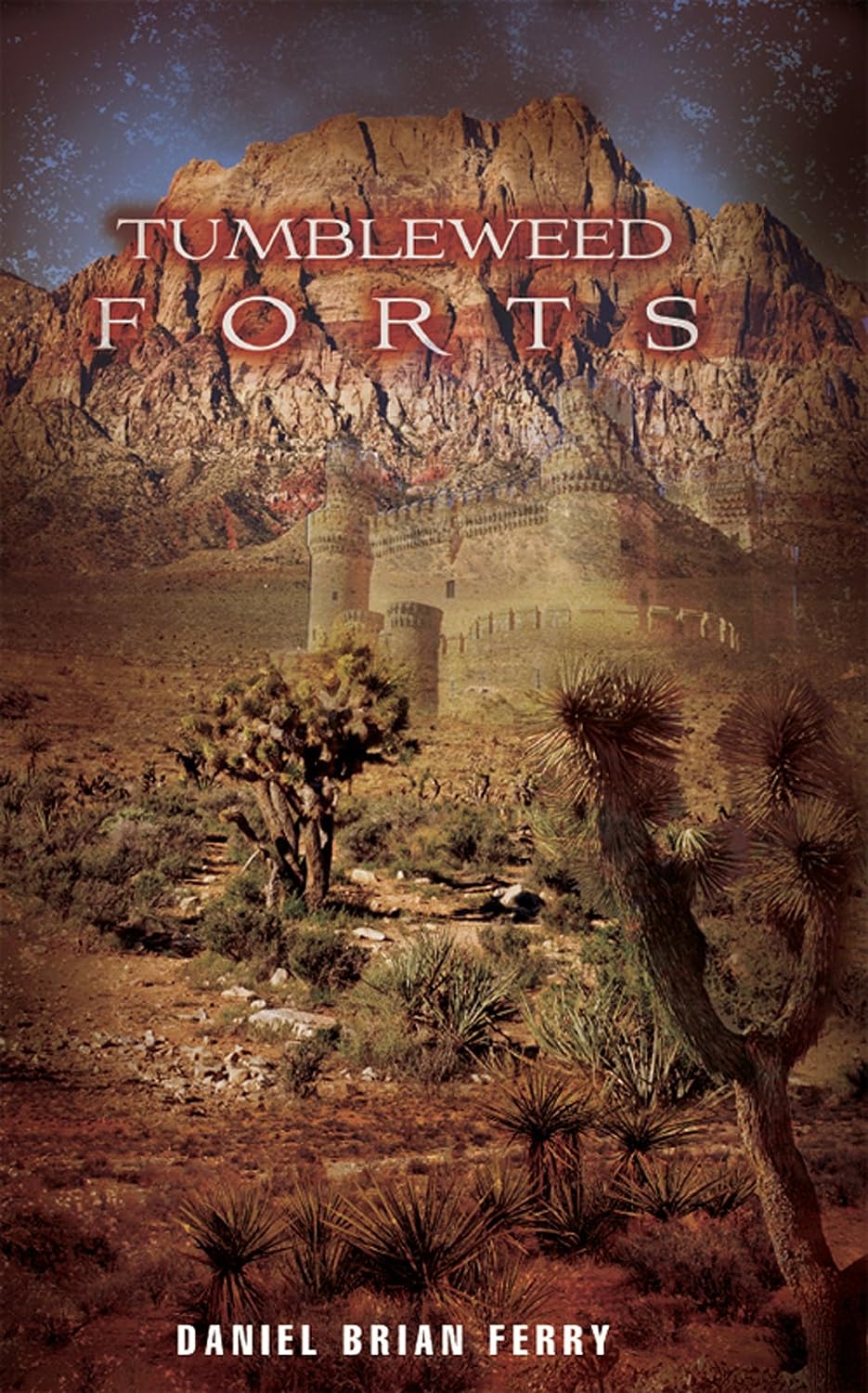 History will fail to list the dead and the valiant as time goes on but the battles for the tumbleweed forts will live in the hearts of the desert knights ’til memories are no more.

When Joshua learns his family must once again move to a new home, he is not at all happy. Such is the lifestyle for families in which the father is a “knight of the sky” who flies the “thundering airships,” but that makes it no easier for Joshua to bear. His desert home is his “mother,” and he is distraught at the prospect of leaving, of having to face the fact that the “tumbleweed forts of his youth were being taken away by stepmothers of trees and forests of snow.”

Joshua decides to have one last desert adventure, one last visit to the tumbleweed fort built with such care and precision by Joshua and his fellow “desert knights.” Once he ventures out into the desert, however, the wind increases; he is caught in a sandstorm , and he struggles to reach his fort. Finally stumbling upon it, he gratefully crawls inside, his energy completely spent, and falls into a deep sleep. But when he awakes … ah, then his most fantastical adventure begins.

Author Daniel Ferry has created a captivating story of a young boy’s journey into another dimension. With scintillating descriptions and intriguing metaphors, Ferry paints a vivid picture of Joshua’s adventure. The boy meets the ethereal Zaleen, a vision who guides him on his travels across many planes. He must evade the “Durs” … guards whose punishment for “dimensional travel” is death to the traveler … and battle dark knights, all the while keeping his wits about him as he learns the many lessons from the challenges Zaleen presents to him.

The satisfying and unexpected conclusion to this story is just another of Ferry’s talents in weaving together the many threads of this mystical tale.

“The creature child has come to play. He’s so

different from most of his kind. He respects my power

and thinks I am beautiful just as I am, even though he

comes from those who would change and defile me. I

will watch over the child, even though Sister Wind is in

a fierce mood. She whips at him as though he alone is

responsible for the acts of his kind. Careful, sister,” the

desert warns, “even you are no match for me,

and this child is under my protection. You may not

have him. He has made it to his Tumbleweed Fort,”

the desert declares … “and she is waiting.”

Joshua slowly woke from his sleep, wondering if the memories of the windstorm were a dream. The sticker walls of the tumbleweed fort, scratching across his skin, erased at least part of the dream possibility. Joshua’s ears strained for any sound … but there was none.

Can the storm have passed? Joshua thought. Am I still dreaming?

Confused, he stumbled outside, regaining some of the strength and balance he had lost during the storm. The desert mother was completely still … too still. Joshua’s last recollection was of the storm, and yet all was quiet, as if he was looking at a picture.

He was once again struck by the beauty that sur-rounded him. Joshua knew in his heart that if he lived through this experience and was able to return to his desert mother in the years to come, only he would have become older and bent from the weight of time. The snake holes, the tumbleweeds, the cactus, the Joshua tree, and the rabbits would remain ever young, as he saw them in his youth.

Being lost in the rapture of the desert, the shades of sunlight on the sand, and the design of the Joshua tree had let the tired boy’s mind rest from the storm, but without warning of any kind, the quiet was broken by a buzzing in the back of Joshua’s head. The buzzing became louder and louder. Joshua shook his head, trying to escape from the noise, but as quickly as it had started, the buzzing turned into a soft, cloud-like sound, floating just outside of his ear. Joshua began to relax, and the sound turned into what seemed like conversation—but very far away. Closer and closer the sound crept, until it seemed to be right behind him.

“Hello, Joshua,” the voice said again in a familiar tone.

Joshua spun around to see—he had heard that voice before. Framed between a fallen cactus and a huge bramble bush, a childlike vision stood dressed in a white robe-like material, so soft and bright that it seemed out of focus to the eye. Joshua knew many children in the desert communities, but he did not recognize this one. She’s certainly not dressed like anyone around here, Joshua

thought as his examination continued.

Her hair was coal dark. Her bangs came down to the top of her eyebrows, ending in what looked like pointed sideburns that stopped just below her earlobes. Had it not been for the freckles lightly covering her cheeks and disappearing toward the sides of her face, Joshua could have easily mistaken her skin for ivory. The cheekbones were high but formed softly, rather than coming to a point just below the outside of her not-quite-slanting eyes.

To Joshua’s mind, adding to the mystery of the girl at this point was really not necessary, but he also noticed that her eyes gave off a rather hypnotic, crystal effect, as if he were looking at a piece of ice that had been drenched in a light blue dye.

The strange girl failed to register any expression on her more-serious-than-angelic face, as she patiently waited for the dumbfounded youth to finish his mental examination. Joshua thought the girl to be not yet of teenage years, although the expression on her face and in her eyes was much older. She seemed taller than average height, mostly because of her long legs, but with almost too fine of a bone structure for her size.

The robe-like material was shaped in the form of a dress that fit loosely, was tied at the waist, and came down to mid-calf. Her feet were barely covered in a sandal-type shoe, with straps that wrapped her ankle and stopped just below the bottom of her dress. Quite out of the ordinary, Joshua noticed the mysterious girl seemed to be moving

in a way in which the weight of gravity had no effect. He could relate it more to a gliding than the up-and-down motion seen in most human animals. Nothing was famil-iar about the child … except her voice.

Where have I heard it before? Joshua thought. And who in the world can this girl be?

“My name is Zaleen,” the child vision said in a friend¬ly but almost instructive tone, “and it greatly depends on whose world you are talking about.”

Joshua tried to make some sense of what the girl was saying, but his mind became lost in a nightmare—the one where he was running for a train but was unable catch it.

“Wait a minute,” Joshua said as he watched the train slowly pull away. “I haven’t asked you any questions. How can you read my mind?” He was grabbing now, try-ing to hold on to any part of a conversation in which he had completely lost his place.

“The how is not important right now, and reading the minds of your kind is easier than simple,” Zaleen said, sending the boy even farther from the train. Before Joshua could question the “your kind” comment, the girl continued. “Remember the storm? Remember the voice in the wind?”

“Now I remember,” Joshua answered. “I thought it was my parents calling to me.”

“Yes, I know,” Zaleen said. “You did not have much time, and I knew you would come to your parents’ voices more than any other.”

Joshua knew he’d recognized the voices but could not match it to the girl, and now he finally knew why. The moment Zaleen gave Joshua that information, her voice changed from his parents’ voices into the voice of a young girl but with the sureness and softness that could only come from the experience of time.

“Much … time … left,” Joshua stammered, trying to return to somewhere in the beginning of the conversa-tion.

“The wind creatures were having the best of you,” Zaleen continued. “They’ve been in a terrible mood late-ly.” She put her finger to her mouth and warned, “But quietly now. I’ve broken one of the most important com-mandments in bringing you here.”

“Here?” Joshua questioned, frustrated in his inabil¬ity to understand what was happening all around him. He checked once more to see if his surroundings had changed from the fort and the desert he thought he knew so well. Confident in what his sense of sight was telling him, Joshua risked another statement with as much con-fidence as he could find. “But we are in the desert by my fort, exactly where I was when the storm was raging.”

“You are, and you aren’t,” Zaleen replied. “As I used your parents’ voices, so I used the scene where you were.” With more of a rushed tone in her voice, she continued. “Quickly now. We must go.”

Joshua felt the sense of urgency and frantically looked around, as if someone might be behind him. Failing to see anyone and puzzled by her sense of

danger, Joshua turned his gaze to the vision child with the hope of some answers. But just as Joshua was about to question the girl, the strange buzzing began again in Joshua’s ears. The buzzing vaguely reminded him of the Winged Black Knights that had surrounded him, and he began swatting at his ears, thinking they might not have finished with him.

Suddenly, in front of Joshua, two dark figures mate-rialized. He was shocked to see they were somewhat of human proportion but much larger. The figures were outlined in a black mist which, to Joshua’s mind, cov-ered their arms and legs, if they had them at all. Looking at the forms inside the mist reminded Joshua of looking at black ink being poured into a container filled with clear liquid. Anything else about the creatures was less discernable. Fear-stricken, Joshua was painfully aware of the coldness that accompanied their being. It was as if the warmth of the life force was destroyed in their presence.

Joshua could see no eyes, but he knew he was being watched, and every fiber in his being told him he was in immediate danger. As the darkness approached him, Joshua felt a chilling pressure on his throat. Zaleen quickly reached out and touched Joshua’s shoulder, and as she did, Joshua’s surroundings instantly changed. The coldness and the pressure on his throat disappeared, and Joshua’s body seemed to be moving through a sparkling bright waterfall but—to his amazement—without his getting wet.
Born in Panama, the Daniel Brian Ferry spent the first part of his life living and traveling as an Air Force “brat.” Ferry has a degree in Journalism from the California State University at Northridge and presently lives in San Diego, California.