You are here: Home / Book Excerpts / Excerpt From Steam and Sensibility by Kirsten Weiss @RigaHayworth 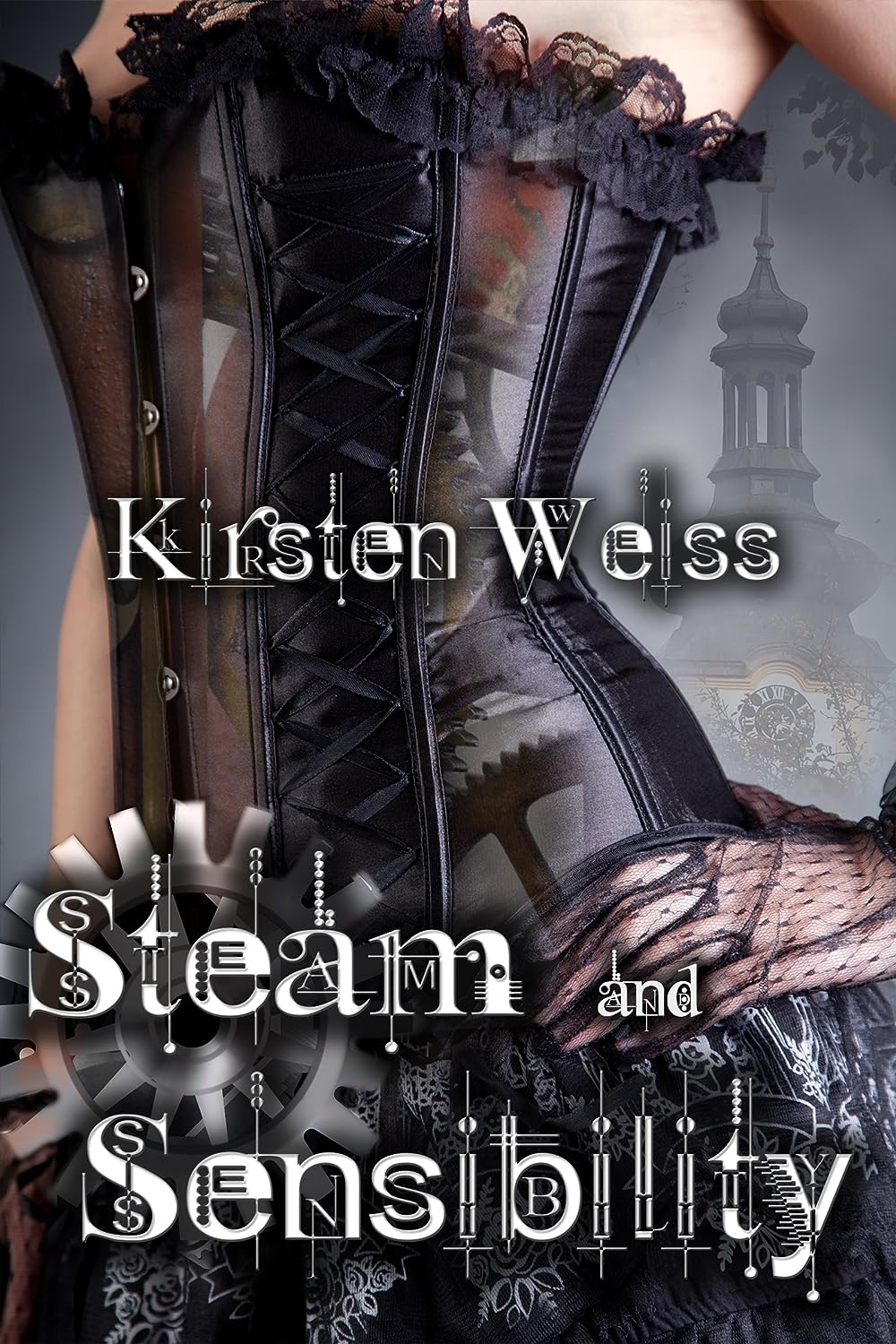 About your Book:
Steam rising.

California Territory, 1848. Gold has been discovered, emptying the village of San Francisco of its male population. Steam-powered technology is still in its infancy.

At 19, Englishwoman Sensibility Grey has spent her life tinkering in her father’s laboratory and missing the finer points of proper British life. But when her father dies in penury, she’s shipped to San Francisco and to the protection of an uncle she’s never met.

The California Territory may hold more dangers than even the indomitable Miss Grey can manage. Pursued by government agents, a secret society, and the enigmatic Mr. Krieg Night, Sensibility must decipher the clockwork secrets in her father’s final journal, unaware she’ll change the world forever.

Magic, mayhem, and mechanicals. STEAM AND SENSIBILITY is a proto-Steampunk novel of paranormal suspense set in the wild west of the California gold rush.

Sensibility Grey gripped the brass rail between her gloved hands. Groaning, the steamship strained against its anchor chain, pinioned to the bay floor.

It was all wrong.

The fleet of wooden-hulled ships, deserted, their masts piercing the twilit sky was wrong. The village of San Francisco, lying lifeless, without so much as a barking dog to break its silence? Wrong. And most wrong of all, her mourning garb. Sensibility was too young for sorrow.
Her gown, black as a raven’s feathers, whipped about her limbs in the salty breeze. She leaned forward, slim hips pressing into the rail, and shielded her eyes against the sun setting behind the bay.

Fog drifted over rolling, green hills. Its tentacles stretched, grasping, as if to consume the village, the ships. Unease rippled up her spine. Could it be plague? The thought struck like a blow. Plague. It had cut through Europe’s population like a scythe. But that had been centuries ago, and this was the modern era, 1848.

She rubbed her thumb across her copper pocket watch. It dangled from her brown leather waistcoat, the only garment she had not dyed to mark her father’s passing. Its soft, chocolate color brightened her English-rose complexion.

Her uncle waited for her somewhere on shore, in San Francisco. This barren place was to be her new home, and a leaden depression weighted her heart and shoulders.

A strand of black hair whipped from her bun, lashing her skin. She thrust the errant strand behind her ear, her bottle-green eyes straining for a sight of the ship’s master. His tiny rowboat lay beached upon the shore, and he and his men had been gone for over half an hour. Had they been ensnared? Caught in the same trap that had captured the men from all those abandoned ships?

Shifting her weight, Sensibility subconsciously adjusted to the movement of the waves. She stared at the ships, forced herself to think of the puzzle at hand rather than her recent bereavement. Dozens of them filled the harbor – too many for such a small place. San Francisco could not hold more than five hundred souls. The presence of so many ships cluttering its bay was unnatural.

No, she was not paranoid.

It was all wrong.

And as she could do nothing about whatever was wrong, there was little sense imagining herself into a state. Making an exasperated noise, Sensibility turned and leaned back against the rail.

She gazed absently at the smokestack, regretting the end of her life on board. The speed of the ship had amazed. The size of its great steam engines had awed. And she was certain the engines could be even more efficient with only a few small improvements.

Her brow creased, more pressing concerns crowding her mind. Her uncle – her new guardian – was to meet her at the dock. Would he know she had arrived twelve hours early? And if not, how would she find him?

Why had her uncle come to the California Territory? He was an Englishman, like her father, and had been born in the world’s great capital, London. Why come here? Perhaps he was a solitary man, a scientist like her father. Or an explorer at heart.

Unable to resist any longer, she returned her gaze to the village, still and silent.

An Indian attack? No, that would not account for the empty ships. Unless they were lying in wait on the shore for passengers and crew to disembark…

A thin tangle of gray smoke rose from a chimney, and the muscles between her shoulders loosened. She’d been fanciful. San Francisco wasn’t abandoned. And there was no doubt a logical explanation for its empty streets that did not involve plague or Indian attacks.
Indian attacks. Really! She snorted.

Were there Indian attacks in the California Territory?