You are here: Home / Book Excerpts / Excerpt From One Dot, Two Dots, Get Some New Dots by David Silverstein @DavesDots 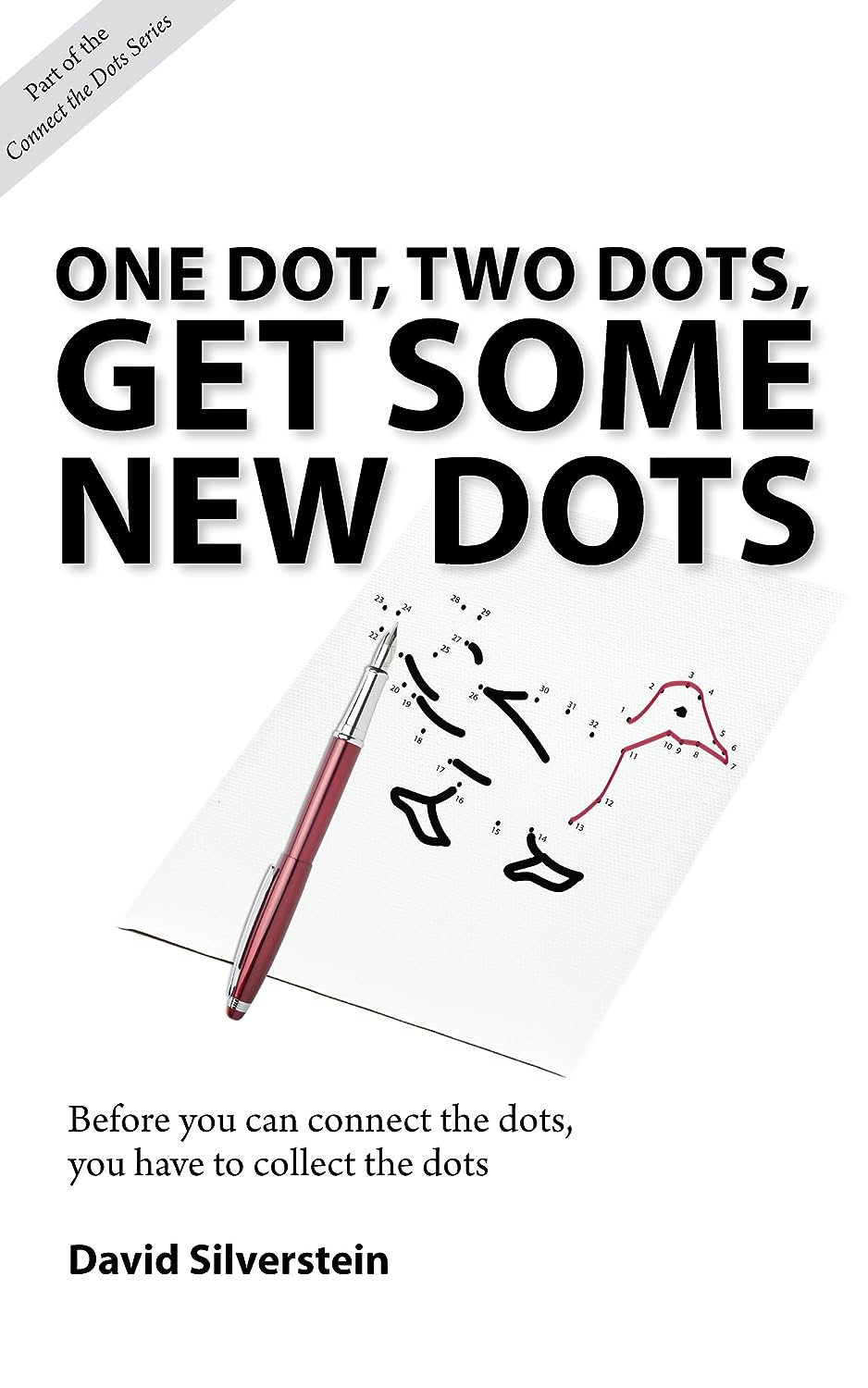 Management and innovation expert David Silverstein explores why collecting the dots the information that is all around us is key to solving problems, and developing innovative strategies and breakthrough ideas. Through real-world examples of some of today s leading companies, you ll see how dot collection can lead you to be more creative and stay ahead of your competitors. In One Dot, Two Dots, Get Some New Dots, you ll discover: why collecting lots of information is so important, how to accelerate your learning and creativity, and 12 techniques for becoming an expert dot collector.

One Dot, Two Dots, Get Some New Dots

Meet Colonel Blaber whose story encapsulates why collecting the dots is so important.

Why reading is the most efficient and effective way to collect dots.

Chapter 3: Ask and You Shall Receive Dots 17

How asking questions can extend the here-and-now experience for later application.

Where you should look in the broader world to find useful dots.

The key to connecting dots: Learning for the sake of learning.

Surround yourself with interesting and intellectually curious people.

Chapter 7: Collaborating with Other Dot Collectors 39

Open innovation programs make this easier than ever.

Learn to increase the quality of the dots you collect.

Techniques so you can become an expert at collecting dots.
Chapter 1: READ, AIM, FIRE

U.S. Army Lieutenant Colonel Pete Blaber, a Delta Force Commander, was stationed in Hungary in 2001. One day in September, he was tailing a mock terrorist around the streets of Budapest for a training exercise when he got a call. A passenger jet had crashed into the World Trade Center. Pete quickly wrapped up the exercise and hurried back to his hotel room where he learned of the terrorist attacks and the ensuing tragedy. As a warrior who had seen combat in Iraq, Somalia, Bosnia, and other places he can’t tell us about, Pete’s experience told him that there was an awfully good chance he would soon be paying a visit to Afghanistan.

What did Pete do when he learned of the 9/11 attacks? What he didn’t do is head out to the firing range to work on his marksmanship. Instead, he began honing his mind for the potential mission before him. Pete quickly began searching for, downloading, and reading articles about Osama bin Laden, whose name he himself had only heard for the first time a couple of years earlier. He began reading up on Al Qaeda, the Taliban, and Afghanistan. He logged into the online databases of LexisNexis to gather content from newspapers, magazines, and legal documents. He ordered books about the Taliban and books written by former Soviet generals about their Afghan exploits in the 1980s. He also read books by Afghanis themselves, many of them former members of the Mujahideen that resisted the Soviets for a decade.

Pete wanted to get all the different perspectives on strategies and tactics tested by different parties across Afghanistan’s rugged terrain. In short, Pete’s first instinct was to collect information.

Delta Force, along with its better known counterpart, Seal Team Six, is the American military’s most elite special force. Unlike other military units, part of Delta Force’s training involves designing their own training routines. That summer, Colonel Blaber and his men assessed the world’s hot spots to determine how they should supplement their training. They identified Chechnya, Columbia, Nepal and, among others, Afghanistan. But they had no way of knowing that their next call to duty would in fact be Afghanistan, which was not at the top of their list. After analyzing their list, they realized that a common thread was rugged mountain terrain, which led them to train, in the summer of 2001, in the mountains of the Bob Marshall Wilderness of Western Montana.

Next, Pete needed to get his men accustomed to maneuvering in Afghan terrain. So he researched Afghanistan’s geography and winter conditions. His research revealed that, through fortuitous insight and planning, he had already made great headway. As it happened, less than a month earlier he and his men had been training in the snow-filled mountain passes of Montana that resembled the mountains of Afghanistan.

In addition to his reading, Pete decided that he needed to find some specific information: how to find Osama bin Laden. In researching Al Qaeda, Pete learned of Ali Mohamed, a captured terrorist who had been tied to bin Laden and jailed for his role in the 1998 bombing of the US embassy in Kenya. He was also highly suspected of planning the 1993 bombing of the World Trade Center and had also served as bin Laden’s bodyguard.

During his imprisonment, Ali Mohamed had sought to mend his ways and tried to become cooperative with his keepers. He had handwritten a 30-page document about Al Qaeda’s operations and bin Laden’s habits. Pete managed to get a copy of the document. He read it, highlighted sections, and plastered it with sticky notes. But for Pete, the document wasn’t enough. He knew that anyone who could write 30 detailed pages on Al Qaeda would likely have even more to offer—if asked the right questions.

When Pete first asked to interview Ali, intelligence experts told him it would be a waste of time. Ali Mohamed didn’t know where bin Laden was, they said. And even if he ever had known, bin Laden would have moved since then—Ali had been imprisoned in the US for the last three years.

But Pete wasn’t planning on interviewing Ali to just ask about bin Lad­en’s location. Pete had a different plan. Instead of asking “where,” Pete would ask “how.”

So Pete visited Ali in prison:

“How do I find his bodyguards?”

As foreigners in Afghanistan, the Arabs would stand out by their atypical food preferences, Pete deduced.

“Ask the money exchangers, because the Arabs get money delivered to them from home by couriers and must always convert the money to another currency,” Ali continued. Another piece of the puzzle was falling in place.

The tactic of infiltrating Taliban villages dressed as woman in burkhas was ultimately used by American special forces in Afghanistan. Eventually the Taliban began using women to search other women.Pete needed to get as much of this on-the-ground knowledge as possible. He spent the next three hours asking Ali questions and challenging him on the answers, to make sure he was getting accurate information. From Ali’s information, Pete even pieced together how to infiltrate cities like Kabul: “You dress like women and wear burkhas. In teams of two, no one will bother you because the Taliban forbids men from talking to women in public. Just walk away if someone tries to talk to you.” The Taliban’s own customs would give Pete and his men cover to enter undetected, faces hidden behind veils, weapons concealed under the voluminous burkhas, with no fear of having to answer men’s questions.

Why did I share Colonel Blaber’s story with you? I chose it because it encapsulates a concept called “collecting the dots”—a skill that every leader and decision maker must master. In today’s challenging business world that’s driven by complex strategy and innovation, we hear the phrase “connect the dots” all the time. Unfortunately what I don’t hear often enough is an awareness of how important it is to collect the dots before trying to connect them. In short, Colonel Blaber knew that he needed to collect and connect the dots before he could call the shots.

The best definition of the collect-the-dots concept comes from a Rand Corporation paper titled, “Collecting the Dots: Problem Formulation and Solution Elements.”

Despite what we all might think of great warriors who are trained to jump out of planes in the dark of night, trek through swamps, and kill with their bare hands, Pete’s reading of history, his research on geography, and his questions of Ali Mohamed offer us a much more realistic appreciation for what these amazing soldiers do. In this case, far more important to Pete than anything else was collecting a duffle bag full of dots that he could put to use in his search to find Osama bin Lad­en. Pete collected dots—by reading books, reports, and articles about Afghanistan and wars fought on its soil; training on similar terrain; and asking questions of Ali Mohamed—which helped him safely lead his men on life-threatening missions to find bin Laden. And don’t confuse what Pete did with intelligence gathering done by organizations like the CIA and the National Security Agency. Intelligence is very important, too, of course, but most of Pete’s initial dots came from everyday sources that are just as available to you and I.

Our lives may not be as dangerous as Pete’s, but we all have the same vital need for information. For our businesses to thrive and our careers to flourish, we need to collect dots.

As Ray Stata, former chairman of Analog Devices famously said, “The rate at which individuals in organizations learn may become the only sustainable competitive advantage, especially in knowledge-intensive industries.” That is, the only way to stay ahead of your competitors is to learn faster than they do. Collecting dots—exposing yourself to new ideas—accelerates your learning and creativity.

In the early days of the coalition invasion of Afghanistan that officially began on October 7th 2001 (I say, “officially, because special forces operators like Pete were there before October 7th), many of the things Pete and his men learned through their dot collection efforts would prove vitally valuable. The early days of America’s intervention in Afghanistan went exceptionally well. For Pete’s detailed perspective on why things in Afghanistan spiraled out of control in the years that followed, I highly recommend his book: The Mission, the Men, and Me.In the following pages, we’ll explore strategies for improving your dot collection approach. Dots come from many places. Dots come from observing what goes on in the factory, kicking the tires in a garage, and visiting labs. Dots also come from other people and our conversations with them. They can even come from watching television or wandering around a museum. But no matter how you slice it, for those with lots and lots of dots to connect, the vast majority of the dots come from reading.

//David Silverstein is the CEO of BMGI, which he founded in 1999. Since then, he has grown the company to an internationally recognized and highly respected firm specializing in business performance, strategic planning and innovation. As CEO, David drives BMGI’s strategic direction with a focus on continuously improving existing offerings while constantly searching for the next generation of business excellence methods, tools and practices. Recently, David has turned his attention to innovation and business strategy and the identification of cutting edge solutions.

As a highly regarded public speaker and author, David shares his vision around the globe where he has shared the stage with notable figures such as Jack Welch, Larry Bossidy, Jim McNerney and Steven Covey. A sought-after thought leader, he has written on innovation, performance and business leadership for numerous publications including BusinessWeek, Inc. Magazine, Wall Street Journal, Forbes, American Executive, Worth Magazine and BP Trends. David has also authored several books on innovation and business leadership, most recently publishing additions to the Connect the Dots Series.