You are here: Home / Book Excerpts / Excerpt From It’s A Ruff Life by B R Tracey @RuffLifeOnline 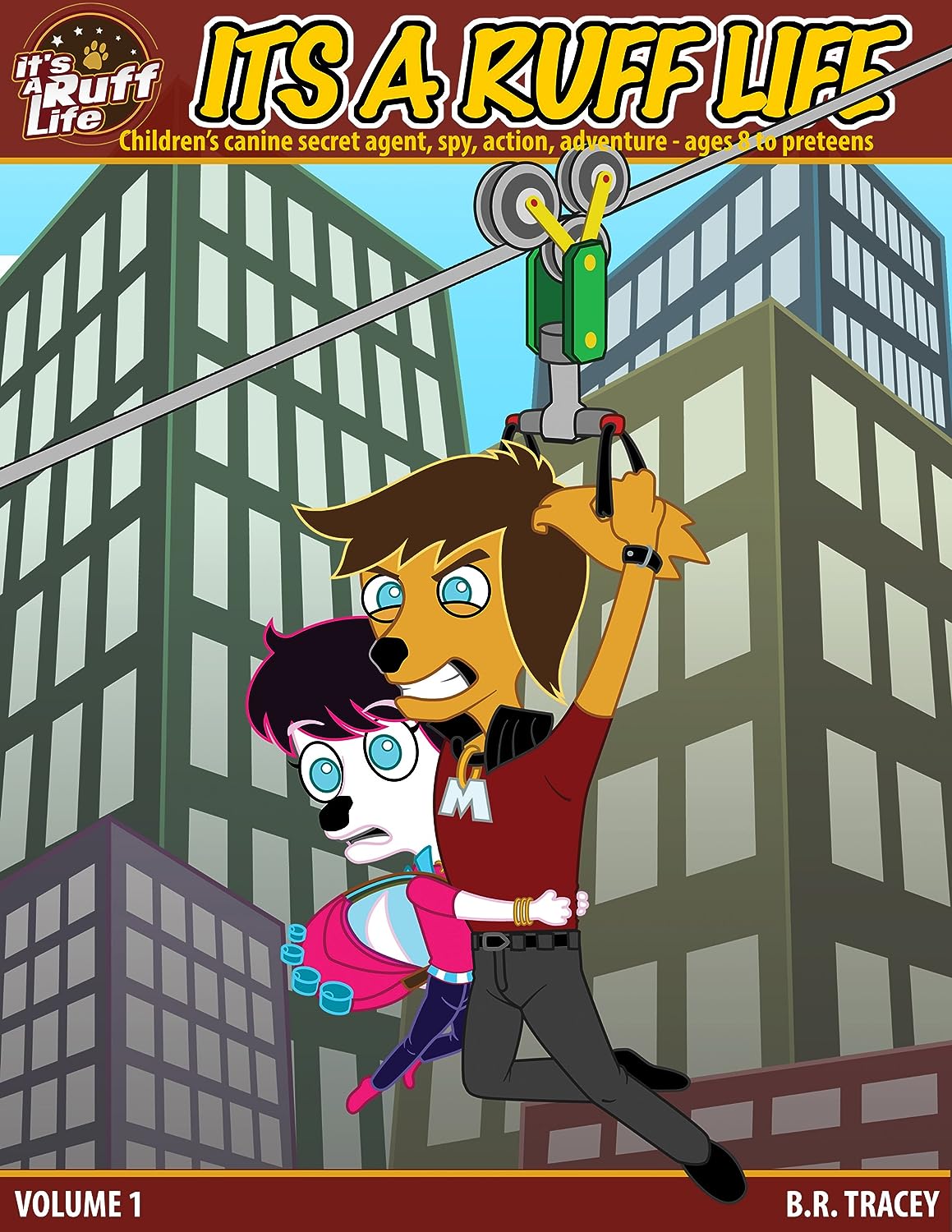 About your Book:
After his success in stopping the Gold Fingered Gang. Max, the top MI6 Canine Agent is sent under cover to discover what Lord Alfred, Mayor of Beckingham is up to…

He’s thrown together with Bella, Lord Alfred’s champion pedigree teenage doglet who turns out to be a massive thorn in his side and almost blows his mission.

How can Max save his mission and help Bella get what she wants before being discovered?

An unidentifiable van with false number plates stopped alongside a busy market street. The street was lined with shops, banks and building societies. Although there were a few men around, it was mainly crowded with women and little children going about their lives in the same way as usual; unaware that anything out of the ordinary was about to happen.

All of a sudden five men dressed from head to toe in gold jumped out of the back of the van and headed into a party planning shop.
AN ALARM BELL PIERCED THROUGH THE SOUNDS OF PASSING TRAFFIC. A GUN SHOT WAS HEARD. THERE WAS A SCREAM…

Then all went quiet.

A car with blacked out windows pulled up next to the side walk and a door on the far side rose up in the air. Inside, the seats were white leather and the dials on the dashboard looked as complicated as a 737 passenger jet. A golden retriever dog got out from the passenger side of the car dressed in a combat jacket.

He stopped and sniffed the air, walked around the car and went into the party planning shop.

There was chaos in the back room. One person had been shot and another was being made to type a series of instructions into a computer console. ‘Max’ weighed up the situation very quickly. He knew that the robbers wouldn’t take any notice of him, as he was just an average dog – or was he?

He lay down on the floor behind some crates and pressed a button on a watch like object on his front paw which instantly emitted an electromagnetic field. Suddenly, a gun flew out of one of the robber’s hands over his head and out of reach. In fact all five guns did the same thing simultaneously.

“What the …?” Beefy bellowed with his golden front teeth glinting.

The guns made their way over to where Max was hiding but before reaching him he pressed the object again and they all tumbled to the floor in a heap near his paws. The gang was totally gob smacked and hadn’t got a clue what was going on.

Max had a spherical object between his paws. He pressed a button on the side and nudged it with his nose towards the men; as it rolled it started to release teargas. Max had already put on his specially designed gas mask and waited for the gas to take effect. The robbers were even more confused; they didn’t know what was going on.

Max stood on his hind legs and crouched a little in a perfect kick boxing pose. It’s time to kick some butts, he thought. Max lashed out with his front right paw and caught one of the men in the throat. He then jumped up and used all the power in his back legs to wind the lanky criminal in the stomach. The man fell backwards and banged his head. He was out cold.
“It’s that dog!” shouted Beefy as he pointed towards Max. “Let’s get him.”

The rest of the men, left standing, started to make a circle round Max to trap him. Closer and closer the criminals came – they were enjoying this but Max bided his time until just before they were in touching distance of him. He somersaulted high in the air and landed on the outside of the circle.

Max raised up on his front paws in a typical handstand and pushed himself further forward to perform a back flip onto the leader of the group, who stumbled forward knocking heads with the ‘dwarf’ on the other side of the circle. Both men collapsed on the floor.
Now the final two, Max thought.

By now the last two robbers were getting really angry and one of them took out a knife and raced towards Max screaming, “Arggh! Take that.” As he was about to stab Max, the super canine agent nimbly jumped high; did a slight turn in the air and using his left hind leg kicked Beefy in the head – golden teeth winking as he went down.

The last one was easy. Max crouched down low in a kick boxing position, turned 360 degrees at the same time colliding with his attacker’s knees. Crack! Something must have broken. Brainless lay clutching his knee writhing around the floor in agony.
On each fallen man, Max placed a special circle, (‘homing device’) for the police to come and arrest them. He pressed a button on his cuff. ‘Hsss’ went the sound of air. The vapour would erase everyone’s memory that a canine secret agent had captured the ‘Gold Fingered Gang’.

Max walked out of the shop, got into his car and a few seconds later the car moved off.

It wasn’t long before the sound of sirens from police cars and ambulances could be heard in the High Street.

“Well done Max. I have another mission for you – in deep cover.” Mrs Miller, Head of MI6, said. “You are going to live with Lord Alfred, Mayor of Beckingham.

Read the file and be ready to leave for your assignment tomorrow, oh and by the way, you won’t need your car for this mission.
Your contact will be ‘C’ for any gadgets you need and for the occasional lift.

I want you to text me regularly with Lord Alfred’s activities and I want you to see if you can find any dogs that would be suitable to join the service.

I will recommend to the board that you be put forward for promotion on the successful completion of this next assignment.”
Max left the office that night somehow knowing that it would be a very long time before he was to return.